Pasinex Resources Limited (CSE:PSE, FSE:PNX) (The “Company” or “Pasinex”) today reported financial results for the second quarter of 2019. As expected, production from Horzum AS was lower than the prior year and combined with lower realized zinc prices in 2019, consolidated net income was lower than it was in 2018.

Pasinex Resources Limited (CSE:PSE, FSE:PNX) (The “Company” or “Pasinex”) today reported financial results for the second quarter of 2019. As expected, production from Horzum AS was lower than the prior year and combined with lower realized zinc prices in 2019, consolidated net income was lower than it was in 2018. Adjusted consolidated net income(1) for the six months ended June 30, 2019 was approximately $1.5 million. Consolidated net loss for the six months ended was approximately $0.3 million. 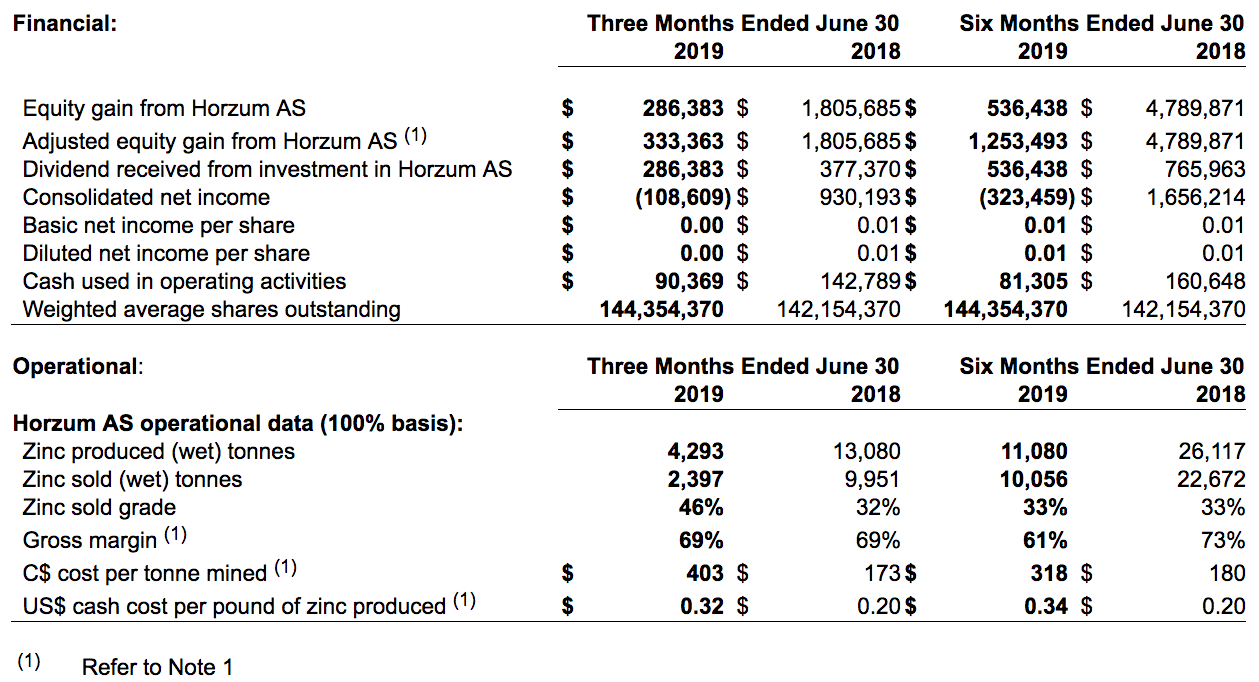 Steve Williams, CEO of Pasinex commented, “Horzum AS produced as expected for the first six months of 2019, with an operating gross margin of 61%. However, the first six months of 2019 ended with a net loss of $495,104 after recognition of an impairment of the Akmetal receivable of approximately $3,000,000. We continue to stand by the original production guidance for 2019 which indicated 14,000 – 17,000 tonnes (wet) for the year.”

Note 1
Please note that all dollar amounts in this news release are expressed in Canadian dollars unless otherwise indicated. Refer also to the year-end 2019 Management’s Discussion and Analysis (MD&A) and Audited Financial Statements found on SEDAR.com for more information. This news release includes non-GAAP measures, including adjusted equity gain from Horzum AS, adjusted consolidated net income, gross margin, cost per tonne mined and US$ cash cost per pound of zinc produced. A reconciliation of these non-GAAP measures to the GAAP financial statements is included in the MD&A.

Pasinex Resources Limited is a Toronto-based mining company which owns 50% of the producing Pinargozu high grade zinc mine and, under a Direct Shipping Program, sells to zinc smelters / refiners from its mine site in Turkey. The Company also holds an option to acquire 80% of the Spur high-grade zinc exploration project in Nevada. Pasinex has a strong technical management team with many years of experience in mineral exploration and mining project development. The mission of Pasinex is to build a mid-tier zinc company based on its mining and exploration projects in Turkey and Nevada.

Visit our web site at: www.pasinex.com

On Behalf of the Board of Directors
PASINEX RESOURCES LIMITED

The CSE does not accept responsibility for the adequacy or accuracy of this news release.

5 Top Weekly TSX Stocks: Corvus Up on AngloGold Acquisition Offer
Graphite Mining in the US
Best Junior Copper Stocks on the TSXV
How to Invest in Lithium Stocks and the Lithium Market