Fireweed Zinc Ltd. (TSXV:FWZ) (“Fireweed” or the “Company”) is pleased to provide a year-end review of its 2018 results and work program on the Macmillan Pass Zinc Project in Yukon, Canada.

Fireweed Zinc Ltd. (TSXV:FWZ) (“Fireweed” or the “Company”) is pleased to provide a year-end review of its 2018 results and work program on the Macmillan Pass Zinc Project in Yukon, Canada.

After reviewing these year-end results, Fireweed CEO Brandon Macdonald stated “It has been another busy year of great accomplishments for Fireweed. In January we published new Mineral Resources which establish Tom and Jason as the largest undeveloped zinc and lead resource in the world held by a junior company. In May we published the results of a PEA study which show the project to have robust economics. These were followed by another successful season of drilling which returned many wide intersections of high-grade mineralization at Tom West and Tom East. We also drilled our first holes on the historic End Zone which returned impressive intersections not yet included in the Mineral Resource. Beyond the technical work, we consolidated the Macmillan Pass Zinc District with the acquisition of additional claim blocks which more than doubled our land position to 544 square kilometres. This expansion included the purchase of the Nidd claims with which Fireweed now owns all four known large zinc systems in the district. Plans for another active season in 2019 will be finalized after we complete the compilation and interpretation of the results from the 2018 program.

I want to personally thank our dedicated and hard-working team for all their great work in 2018 and thank our First Nations partners for their support, guidance and valuable contributions. We all look forward to another year of major accomplishments in 2019.”

Based on the 2017 drill results along with the historic core re-sampling results and compilation of historic data, the Company announced new NI43-101 compliant mineral resources in January 2018 which were substantially larger than historically reported resources. The base case resources were:

Details and supporting information are provided in the NI43-101 Technical Report posted on www.sedar.com and in the Company’s news release, both dated January 10, 2018.

On May 23, 2018, the Company announced the positive results of an independent NI43-101-compliant Preliminary Economic Assessment (“PEA”) for the Tom and Jason deposits prepared by JDS Energy and Mining, Inc. (JDS) with work on tailings and water by Knight Piesold Consulting, both of Vancouver, Canada, utilizing the 2018 mineral resources above.

• Long mine life and large-scale production:

Details and supporting information are provided in the NI43-101 compliant PEA Technical Report dated July 6, 2018 (effective date May 23, 2018) posted on www.sedar.com and in the Company’s news release dated May 23, 2018.

Results of 2018 drilling on step out and infill holes were exceptional and were often higher grade than historic data indicated. Compiled drill results from the 2018 program as published in news releases, were as follows: 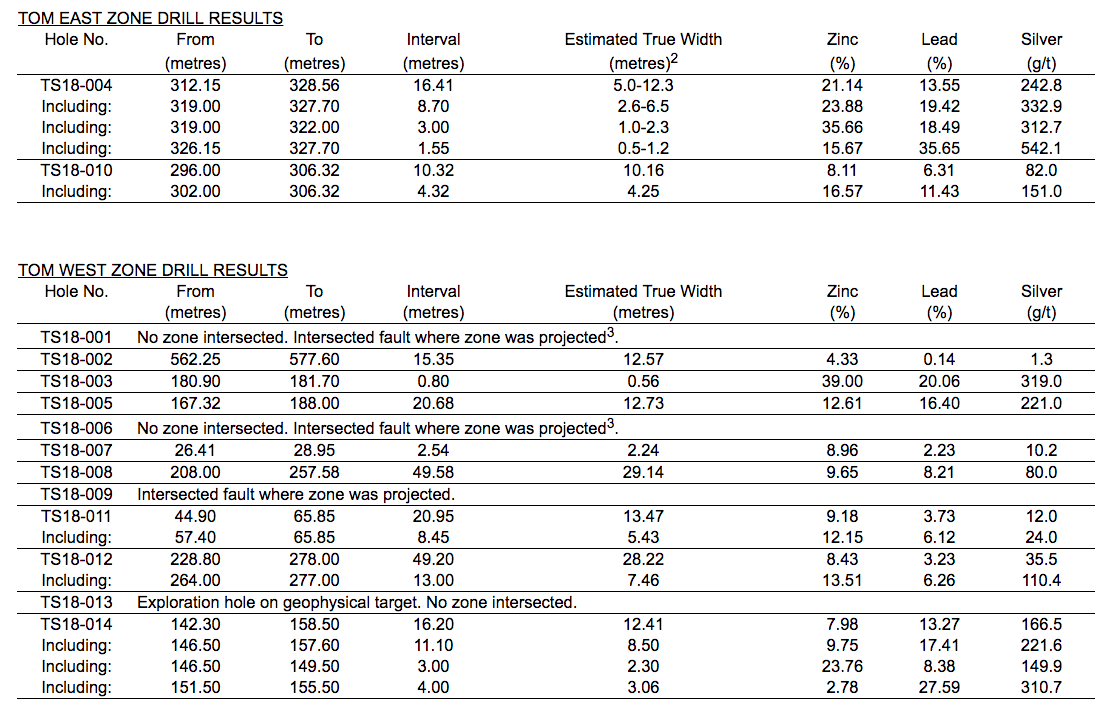 In 2018, Fireweed drilled its first holes on a third significant zinc-lead zone, the End Zone and returned better results than indicated in historical data. End Zone was not included in the property mineral resources or the PEA published earlier in the year because of the limited historical data. Results from the 2018 drilling at End Zone were as follows:

In addition, core from 2018 was logged for geomechanical characteristics prior to sampling to aid in future mine planning and engineering.

Field work in 2018 began with geophysical surveying and geochemical sampling orientation grids in the Tom, Jason and End Zone areas to optimize exploration methodologies. This test work demonstrated that geophysical ground gravity surveying complemented with passive seismic, and geochemical B/C horizon and soil gas hydrocarbon soil sampling, all guided by geological mapping and modern exploration concepts, are effective techniques to detect zinc-lead-silver mineralization in the district and efficiently focus targets for drilling. Over the balance of the field season, large gravity and soil sampling grids were completed complemented by geological mapping. Currently, interpretation of the results of the mapping, geochemistry and geophysics work from the 2018 field season are being carried out toward identifying high priority areas for exploration toward future new discoveries. Results and exploration targets outlined will be released when interpretation work is complete.

In total, a crew of about 40 persons were in camp in 2018 carrying out the drilling and field work program. During the summer the camp was expanded from a 20-person camp to a 50-person camp with a new septic system, additional trailers and facilities, and a renewed permit valid until 2028 to allow for expanded drilling and exploration activities in the future.

During 2018, Fireweed exercised the Tom and Jason option and acquired several adjacent claim blocks to consolidate the Macmillan Pass Zinc District under Fireweed’s name and expand the Macmillan Pass Project land position from 219 km2 to 544 km2. In February 2018, Fireweed exercised its option and acquired 100% interest in the claims which host the Tom and Jason deposits. In March 2018, Fireweed optioned a number of adjacent claim blocks (MAC, MC, MP, Jerry, BR and NS) which cover exploration targets in the district where previous work identified zinc, lead and silver geochemical anomalies in critical host geology. In November 2018, Fireweed purchased 100% interest in the Nidd claims covering part of the Fertile Corridor of highly prospective geology on the northwest extension of the Tom-Jason-End Zone stratigraphy, including the Boundary Zone which is the fourth large known zinc zone in the district. Descriptions of these properties and details of the agreements are in recent Fireweed news releases and MD&A’s available at www.sedar.com and on the Company website at www.FireweedZinc.com.

About Fireweed Zinc Ltd. (TSXV: FWZ): Fireweed Zinc is a public mineral exploration company focused on zinc and managed by a veteran team of mining industry professionals. The Company is advancing its large 544 km2 Macmillan Pass Project in Yukon, Canada, which is host to the 100% owned Tom and Jason zinc-lead-silver deposits with recently announced Mineral Resources and a PEA economic study (see Fireweed news releases dated January 10, 2018, and May 23, 2018, respectively, and reports filed on www.sedar.com for details) as well as the Boundary Zone and End Zone which have significant zinc-lead-silver mineralization drilled but not yet classified as mineral resources. The project also includes option agreements on large blocks of adjacent claims (MAC, MC, MP, Jerry, BR and NS) which cover exploration targets in the district where previous work identified zinc, lead and silver geochemical anomalies in critical host geology.

Additional information about Fireweed Zinc and its Macmillan Pass Zinc Project can be found on the Company’s website at www.FireweedZinc.com and at www.sedar.com.

Forward-Looking Statements
This news release may contain “forward-looking” statements and information relating to the Company and the Macmillan Pass Project that are based on the beliefs of Company management, as well as assumptions made by and information currently available to Company management. Such statements reflect the current risks, uncertainties and assumptions related to certain factors including but not limited to, without limitations, exploration and development risks, expenditure and financing requirements, general economic conditions, changes in financial markets, the ability to properly and efficiently staff the Company’s operations, the sufficiency of working capital and funding for continued operations, title matters, First Nations relations, operating hazards, political and economic factors, competitive factors, metal prices, relationships with vendors and strategic partners, governmental regulations and oversight, permitting, seasonality and weather, technological change, industry practices, and one-time events. Additional risks are set out in the Company’s prospectus dated May 9, 2017, and filed under the Company’s profile on SEDAR at www.sedar.com.  Should any one or more risks or uncertainties materialize or change, or should any underlying assumptions prove incorrect, actual results and forward-looking statements may vary materially from those described herein. The Company does not undertake to update forward‐looking statements or forward‐looking information, except as required by law.

A photo accompanying this announcement is available at http://www.globenewswire.com/NewsRoom/AttachmentNg/2386799c-ae24-46eb-996c-98b7df3d78a0