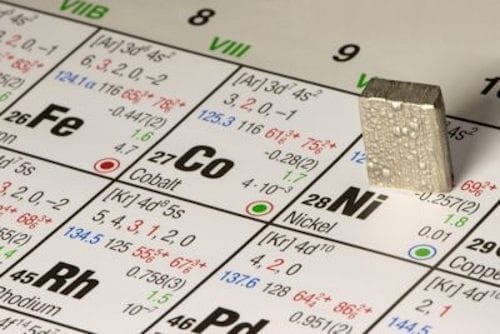 The nickel market is on track for a decade of sustained growth due to increased demand from both traditional and emerging markets.

Nickel has one of the highest-growth demand figures in the metals sector, and analysts expect that trend to continue over the next decade.

Strong demand from both the stainless steel and electric vehicle (EV) markets coupled with continued supply deficits is projected to support robust prices for the base metal over the coming years.

Market research firm Roskill sees nickel consumption growing by nearly 4 percent each year through to 2027 on rising demand from the stainless steel and EV battery sectors. Gradually declining supply levels have helped to move nickel prices out of the hole dug by the supply surplus over the past ten years. While still a far cry from the US$25 per pound level of 2007, in May 2018 the metal was up nearly 80 percent over its 2016 bottom of US$3.50 per pound.

Scotiabank sees that upward momentum continuing into 2019 and beyond. “Nickel prices are expected to gradually move higher over the next half decade as inventories normalize, averaging $6.00/lb in 2018 and $6.50/lb in 2019,” said the bank’s analysts in a recent report.

Nickel’s strength and non-corrosive properties make it perfectly suited as an alloying metal in the manufacturing of stainless steel, it’s primary use. Stainless steel, unlike ordinary steel, is highly resistant to corrosion, rust and water staining. The material is used in a broad range of industries including automotive, construction, household appliances and machinery.

The global stainless steel market is expected to reach US$133.8 billion by 2025 at a 5.2 percent CAGR, according to a new report by Grand View Research. Rising economic growth in a number of developing countries plus government-backed infrastructure projects across the globe are the main drivers of the market.

According to Roskill, the stainless steel sector represented close to 70 percent of nickel demand in 2017. The firm sees demand from this sector growing by 2.5 percent each year over the next decade, due in large part to increasing stainless steel output in China and Indonesia.

On top of its non-corrosive properties, nickel is also an excellent conductor of electricity and the metal has long been used in the batteries of portable electronics. However, Roskill notes that “the increasing electrification of the automotive industry will represent a new demand stream for nickel.”

“Our cells should be called Nickel-Graphite, because primarily the cathode is nickel and the anode side is graphite with silicon oxide,” said Tesla co-founder and CEO Elon Musk in 2016. The Panasonic lithium-ion batteries Tesla uses in their vehicles reportedly have a cathode composition of 85 percent nickel, 10 percent cobalt, and 5 percent aluminum.

Demand for nickel in the battery sector is expected to increase by 20 percent each year over the next decade to average more than 500,000 tonnes per year by 2027.  Although this figure only represents about a third of annual nickel demand for the stainless steel industry, the rate of growth far surpasses the demand coming from the steel mills. This growth dynamic will have an impact on reshaping the nickel mining industry toward nickel sulphate projects.

“Nickel deposits are made, not found, and are subject to supply and demand-driven price cycles,” Mark Appleby, President and CEO of Tartisan Nickel (CSE:TN) told INN. Tartisan owns two nickel sulphide-copper-cobalt properties in Ontario, Canada, including the Kenbridge deposit and the past-producing Alexo-Kelex mine.

“Large scale divestment in nickel exploration and development, has led to a rising spot price because of perceived scarcity; not to mention the new production that was promised but has failed to come online for years now,” said Appleby. “Nickel futures out to one year are in contango, which bodes well for continued price strength.”

Ferronickel or nickel pig iron, the nickel-bearing product favored by the stainless steel industry, represents 51 percent of globally mined nickel supply, according to S&P Global. Ongoing events in the nickel mining industries of the Philippines and Indonesia, two of the world’s most important producers of ferronickel, are having an impact on prices and may continue to do so going forward.

Over the past two years, President Rodrigo Duterte’s government has shut down more than half of the country’s key nickel mines, cutting production from 347,000 million tonnes in 2016 to 230,000 million tonnes for 2017. Well into 2018, Duterte doesn’t seem to be backing down from his hard line aimed at encouraging environmental rehabilitation by limiting the footprint of mining operations.

The Southeast Asian archipelago lost its number one world ranking to its neighbor Indonesia, which recently eased exporting laws for ferronickel. “[Indonesia] is exporting ever-more nickel ore after the unprocessed ore ban was lifted last year, and the raw material is being accompanied by nickel pig iron sourced from Indonesia’s growing domestic processing industry,” said the Scotiabank report.

However, ferronickel is not suitable for making EV battery cathodes. For that, manufacturers need battery-grade nickel sulphate, a nickel product derived from high-grade nickel sulfide deposits for which new discoveries are hard to come by.

The forecasted rise in demand of nickel sulphate from the EV battery industry has piqued the interest of global mining firms. BHP Billiton recently added a sulphate plant at its Nickel West operation in Western Australia with plans to begin production in 2019. Analysts expect more such announcements by major nickel producers will be coming.

With rising demand from traditional and emerging markets and uncertain supply issues, Nickel’s recent bull market is expected to mature over the next decade. Both rising prices and a shifting demand landscape present opportunities for investors interested in capitalizing on a base metal with strong fundamentals.