Lead prices reached their highest level since August 2011 on Wednesday (October 4) on the back of a shortage in China.
Benchmark lead on the LME rose to $2,620.50 per tonne that day before sinking 1.2 percent to reach $2,560. The base metal has been on a roll since Monday (October 2), when three-month LME lead hit a 10-month high of $2,544.
Several factors are responsible for the shortage in China. According to Reuters, 60 percent of lead-zinc mines in the country are undergoing month-long shutdowns due to environmental inspections in Sichuan province. Meanwhile, imports from North Korea, China’s second-largest lead ore and concentrate supplier, have been halted due to sanctions put in place by the UN.


Give me my free report!
At the same time, Chinese lead stockpiles are incredibly low. Midway through September, a Shanghai-based trader said they were “at a critical level” due to strong demand and decreased supply caused by environmental inspections. Chinese lead demand is largely being driven by battery makers, which use the metal to make lead-acid batteries for cars and other vehicles.
As of September 13, Shanghai Futures Exchange lead stockpiles were down more than 64 percent since May, at 29,850 tonnes. What’s more, on-warrant lead available for delivery was sitting at 9,735 tonnes, down drastically from 80,089 tonnes in May.
“In the last few weeks, the ShFE warrants have dropped a lot so people may turn to the ShFE stocks to satisfy their lead demand. Now the stocks are at a critical level,” the trader explained.
In another mid-September article, Reuters columnist Andy Home commented that despite tightness in the Chinese lead market, “London remains flat.” He noted that LME lead stockpiles were stable, and said that three-month LME lead was at $2,400 after falling to $2,257 earlier in the month. “Lack of bullish interest may reflect the much-loved LME play of trading lead and zinc as a relative value pair,” Home said.
More recently, LME lead has moved into backwardation, which means cash buyer lead prices are higher than lead futures prices — this pattern usually indicates a lack of supply. 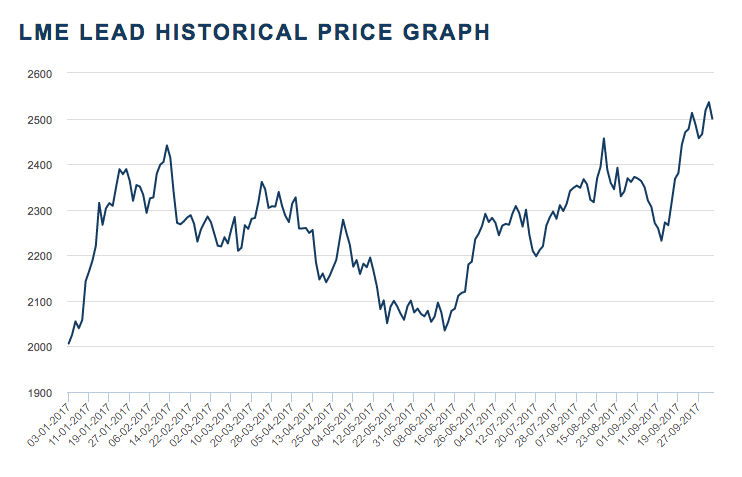 Cash buyer lead prices from January 1, 2017 to October 4, 2017. Chart via the LME.
Globally the lead market recorded a 109,000-tonne deficit during the first seven months of 2017, a stark contrast to the 42,000-tonne surplus seen during the year-ago period. As of Wednesday it was the best-performing metal on the LME, having started the year at about $2,000.
Panelists surveyed recently by FocusEconomics have divergent views on where lead prices will go this year. Looking ahead to the next few months, they estimate that the average lead price for Q4 2017 will be $2,258. The most bullish forecast for the quarter comes from Macquarie, which is calling for a price of $2,599; meanwhile, Euromonitor International is the most bearish with a forecast of $1,729.
Don’t forget to follow us @INN_Resource for real-time updates!
Securities Disclosure: I, Charlotte McLeod, hold no direct investment interest in any company mentioned in this article.

VIDEO — Fund Managers: US Becoming Center of Cannabis Investment
A Look at Historical Copper Prices
What is Coltan? 5 Facts You Should Know
What Happens to Cannabis if Trump Wins?