Production issues have buoyed the metal’s price, but analysts at WoodMac see this faltering in the coming months.

Lead prices have enjoyed a steady increase these past few months, but analysts at Wood Mackenzie expect it to soften by 2020.

Over the past month, lead’s price has increased by 5.56 percent. Although the price has waxed and waned throughout September and October, the base metal has not dipped below the US$2,050 per tonne price point since September 6. It reached its monthly peak on October 18, closing the market at US$2,209.

According to WoodMac Principal Analyst Farid Ahmed, the surge in price was in part due to a tight market.

“There continues to be a tight market — both for concentrates and refined metal — despite the fact that the lead market is currently in the transition phase from four years of deficits into several years of surplus,” said Ahmed. “While not an absolute measure in itself, this is reinforced by (London Metal Exchange) lead stocks still reducing further from the lowest levels for a decade.” 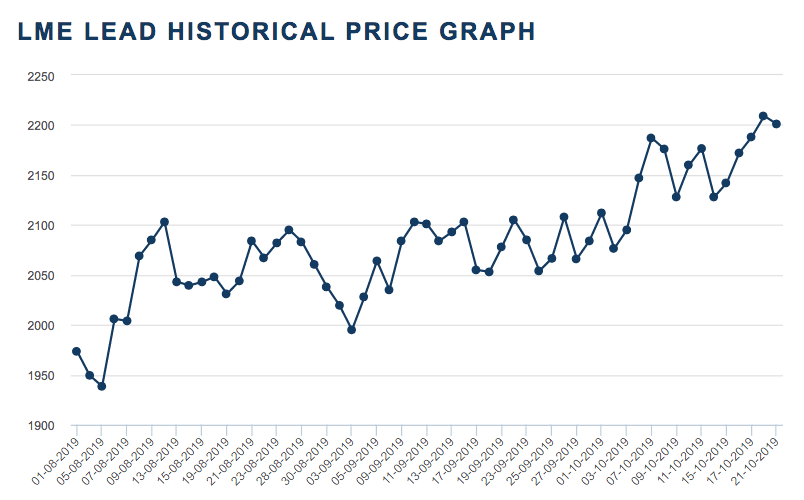 He also pointed to Nyrstar’s (OTC Pink:NYRSY,EBR:NYR) Port Pirie smelter in South Australia as a cause, which has remained shutdown since August.

“Market observers are not showing confidence that operations will be restored next month as planned, or that the facility will quickly hit its stride in terms of output, having struggled with this since the redeveloped plant restarted in 2017,” he added.

Trouble has followed Nyrstar for much of 2019, with the company almost filing for bankruptcy in April before major shareholder Trafigura took over control. Before this, Trafigura had already given Nyrstar US$650 million in late 2018 to keep operations afloat.

But Nyrstar’s troubles did not end there, with other Nyrstar shareholders launching a lawsuit against Trafigura in September, citing Trafigura’s undue influence over senior management affecting decisions.

On top of production issues, Ahmed also points to the upcoming winter’s severity as a good indicator of how lead’s price will perform in the coming quarter and in 2020.

“Some factors that would deflect the price even higher include an early cold snap in, say, North America, Europe or China precipitating a demand spike in automotive battery replacements,” said Ahmed. “A long, mild winter would also soften refined lead demand and leave surplus stocks of finished batteries on the shelves at producers and distributors.”

“Short-term prices are vulnerable to the factors mentioned … but overall, as the lead market moves into surplus from next year onwards and (there is) a general weakening in the global economy — not least in automotive demand — we envisage lead prices dropping nearer to US$2,000 per tonne for next year and softening further in the following years,” he said.

Meanwhile, Nyrstar’s share price was trading at 0.20 euros in Brussels.