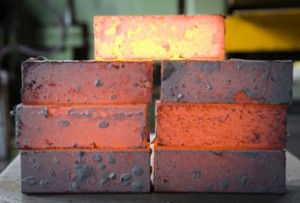 Iron ore investors were heartened by last Tuesday’s 4-percent gain in price, but will the rally continue? According to Macquarie Capital (Europe), iron ore is likely to see a volatile pricing environment in the next few weeks with improvement coming in the second half of the year.

Bloomberg reported the multinational investment bank saying in a recent report that iron ore is expected to slip for another four to six weeks until China’s stockpiles bottom out, before rallying to an average $120 a metric ton (MT) in H2.

Iron ore is currently sitting just above US$110 a MT, a few dollars under the $116 it reached on June 4 due to overzealous destocking at Chinese steel mills. The crucial steelmaking ingredient has been volatile this year, hitting a high of $159 in February, before declining about 25 percent due to a slowdown in China. Prices fell to a five-month low on May 20.

Macquarie’s upbeat forecast contrasts with more bearish predictions on the price. The chairman of Ansteel, one of China’s largest steel manufacturers, warned Australian iron ore miners to expect weaker prices later this year, telling the Financial Times that the average iron ore price will be between $110 and $120 a MT, reported Australian Mining.

MINING.com pointed out that iron ore should actually be lower than the current price due to price divergence between iron ore and the price of Shanghai rebar, the most actively traded steel futures contract, which has reached near-record lows. “Asian steel and Chinese iron ore import prices never diverge for too long,” the website said, noting that last September’s drop in rebar coincided with iron ore hitting a three-year low the same week.

The most likely scenario is less downward pressure on the price, reasoned Clyde Russell of Reuters, due to the trend so far this year of Chinese steelmakers increasing output despite signs of slack demand for iron ore feedstock. “While the bias is still to the downside for iron ore prices, the potential losses from the current price are probably limited to $10-15 a tonne,” concluded Russell, a market analyst at Reuters.

Production at Simandou, Rio Tinto’s (LSE:RIO,ASX:RIO,NYSE:RIO) massive iron ore development in Guinea, is expected to miss a 2015 first production target as the two sides hammer out issues including financing of the costly project, Reuters said. Capex to develop one of the world’s largest iron deposits is pegged at a whopping $20 billion, including port and rail infrastructure.

Meanwhile, another colossal iron ore project in the works, Anglo American’s (LSE:AAL) Minas Rio project in Brazil, is moving ahead despite the mine being three times more costly than initial projections, The Wall Street Journal (subscription required) reported on Tuesday. The company was forced to write off $4 billion from the project’s value in January; the cost overruns were most certainly a factor in former CEO Cynthia Carroll’s departure last year. The cost to develop Minas Rio is now estimated at $8.8 billion.

Anshan Iron and Steel Group, a Chinese state-owned company, will take a majority stake in the Karara iron ore project in Western Australia, South China Morning Post reported. “The advantage of this arrangement is it avoids the need for us to call on shareholders or the market for more funding for Karara’s ramp-up and effectively marks the beginning of a new chapter for [joint venture partner] Gindalbie,” Gindalbie Metals’ (ASX:GBG) managing director, Tim Netscher, said in a statement.

Pilbara-focused miner BC Iron (ASX:BCI) is likely to hit its 2014 production estimate of 6 million MT per annum. That total includes a percentage mined and hauled by Fortescue Metals (ASX:FMG), which has a 75-percent stake in the Nullagine mine. AAP reported that joint venture production guidance for 2013 is on track for 5 million MT, including 3.2 million MT from BC Iron’s equity share.

Canada’s Labrador Iron Mines (TSX:LIM) shipped its first ore of the year, reporting on Monday that a ship laden with 174,360 MT of iron ore set sail from the Port of Sept-Îles bound for China. Labrador signed an agreement in May with Iron Ore Company of Canada to sell all of its production to IOC for the next two years. IOC has an offtake agreement with RB Metalloyd (RBM), a London-based company.

Cap-Ex Iron Ore (TSXV:CEV) accepted the resignation of CEO François Laurin and replaced him with Graham Harris, one of the company’s founding directors. Brett Matich was re-appointed president. Vancouver-based Cap-Ex expects to release a preliminary economic assessment this month on its Block 103 property, which contains an inferred resource of 7.2 billion MT grading 29.2-percent iron.