VVC Exploration Corp (TSXV:VVC) is pleased to announce that it has received an updated Resource Estimate (the “2019 Resource Estimate”) for its Samalayuca property in northern Chihuahua state, Mexico.

VVC Exploration Corp (TSXV:VVC) is pleased to announce that it has received an updated Resource Estimate (the “2019 Resource Estimate”) for its Samalayuca property in northern Chihuahua state, Mexico.

Comments from VVC Chairman, Terrence Martell
“I am particularly pleased for VVC to be able to share this Resource Estimate with investors.  The 2019 Resource Estimate highlights the continued progress of the Company toward the stated goal of ‘Pilot Mining’.  There are numerous additional steps necessary before pilot mining can occur to be covered in future news release, but this Resource Estimate, more than any other communication by the Company, will provide shareholders with an understanding of the significant potential of the Samalayuca Copper Property.

“Over the last two years of drilling results from VVC’s Samalayuca project, it was difficult to convey to shareholders the significance of the results of the drilling campaign and the ongoing exploration program in Samalayuca.  The 2019 Resource Estimate was generated using all exploration data up to December 2018.  Whereas, the previous resource estimate in 2013 showed only an Inferred Resource, now both Indicated and Inferred Resources are being reported.  With a base case resource of 59.40 million pounds of copper indicated and 89.33 pounds of copper inferred, VVC has solid basis for treating Samalayuca as an attractive, viable project.” 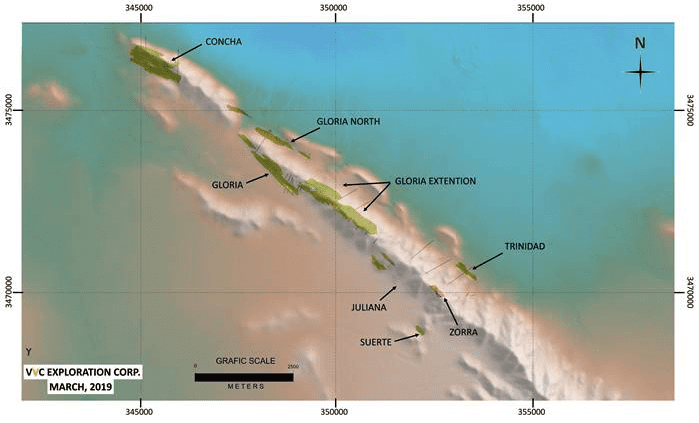 Technical Information
The 2019 Resource Estimate is summarized in Table 1 below. The base case is outlined in gray and various cut-off grades from 0% to 0.30% Copper are included as alternate cases for economic sensitivity analysis.

Technical Oversight
The technical and scientific content of this press release has been reviewed and approved by Jacques Marchand P. Eng. Geology, as the independent qualified person responsible for the resource calculations and associated NI 43-101 report, and Peter M. Dimmell, BSc., P.Geo. (NL ON), VVC Director and Qualified Person as defined by NI 43-101.

About VVC Exploration Corporation
VVC is a Canadian exploration and mining company focused on the exploration and development of copper and gold deposits in Northern Mexico, mainly the Samalayuca copper property in northern Chihuahua State.  VVC has other projects in Mexico and Canada, including gold and silver prospects, Cumeral and La Tuna, in Sonora and Sinaloa States, Mexico and a grassroots gold/VMS prospect in the Timmins area of northern Ontario.

This news release contains “forward-looking information” (within the meaning of applicable Canadian securities laws) and “forward -looking statements” (within the meaning of the U.S. Private Securities Litigation Reform Act of 1995).  Such statements or information are identified with words such as “anticipate”, “believe”, “expect”, “plan”, “intend”, “potential”, “estimate”, “propose”, “project”, “outlook”, “foresee” or similar words suggesting future outcomes or statements regarding an outlook.  Such statements include, among others: planning towards a proposed pilot mining program, the filing of the final report within 45 days, etc.

Such forward-looking information or statements are based on a number of risks, uncertainties and assumptions which may cause actual results or other expectations to differ materially from those anticipated and which may prove to be incorrect. Assumptions have been made regarding, among other things, management’s expectations regarding exploration results, the Drilling Programs, financing efforts, future development and growth, plans for and completion of projects by Company’s third-party relationships, availability of capital, and the necessity to incur capital and other expenditures. Actual results could differ materially due to a number of factors, without limitation, operational risks in the completion of Company’s anticipated projects, delays or changes in plans with respect to the development of Company’s anticipated projects by Company’s third-party relationships, risks affecting the ability to develop projects, risks inherent in operating in foreign jurisdictions, the ability to attract key personnel, and the inability to raise additional capital. No assurances can be given that the efforts by Company will be successful.  Additional assumptions and risks are set out in detail in the Company’s MD&A, available on SEDAR at www.sedar.com.

Investors are cautioned that notwithstanding the expectations described herein, there can be no assurance that the plans described herein will be completed as proposed. Trading in the securities of VVC should be considered highly speculative.  All forward-looking statements contained in this press release are expressly qualified in their entirety by this cautionary statement.

Click here to connect with VVC Exploration Corp (TSXV:VVC) for an Investor Presentation.