Nevada Copper Corp. (TSX:NCU) (“Nevada Copper” or the “Company’’) is pleased to announce that it has completed, and SEDAR-filed, a Technical Report (“Technical Report”) prepared in accordance with National Instrument 43-101 (“NI 43-101”) for its 100%-owned Pumpkin Hollow Copper Project located near Yerington, Nevada.

Nevada Copper Corp. (TSX:NCU) (“Nevada Copper” or the “Company’’) is pleased to announce that it has completed, and SEDAR-filed, a Technical Report (“Technical Report”) prepared in accordance with National Instrument 43-101 (“NI 43-101”) for its 100%-owned Pumpkin Hollow Copper Project located near Yerington, Nevada. The Technical Report, entitled “Pumpkin Hollow Development Options – NI 43-101 Technical Report: Pre-feasibility Study 5,000 tons/day Underground Project (Case A), Feasibility Study for a 70,000 tons/day Open Pit/Underground Project (Case B), and Preliminary Economic Assessment of an Open Pit Project with Initial Capacity of 37,000 tons/day and Expansion to 70,000 tons/day” (“the PEA study”), has an effective date 17 August 2018.

The Pumpkin Hollow underground project is currently under construction and is expected to commence production in Q4 2019. The Technical Report includes the previously prepared 2017 prefeasibility study on the underground project, as well as the previously prepared 2015 feasibility study on the potential development of an integrated open pit and underground mine, both of which studies remain current and valid. The Technical Report also includes the new preliminary economic assessment (the “PEA”) on the open pit project, which was undertaken to contemplate an alternative option of developing the open pit independently from the underground mine. The open pit project plan outlines a Phase I (Initial Capacity of 37,000 tons/day) and Phase I+II (70,000 tons/day).

The PEA study demonstrates that attractive economic returns can be achieved, while reducing the waste requirements and improving grade mined from a less costly and smaller scale project. See the Company’s news releases dated September 10, 2018 and September 24, 2018 for further information.

The report highlights the economic strengths of Phase I and Phase I + II
A summary of the Phase I and Phase I+II life of mine technical details and economic results are presented in Table 1. The data shows that the 37Kstpd option alone has sufficient economic merit to pursue as an alternative to the expanded case, as Phase I alone can deliver an NPV7.5% post-tax of $567M with an IRR of 18%. 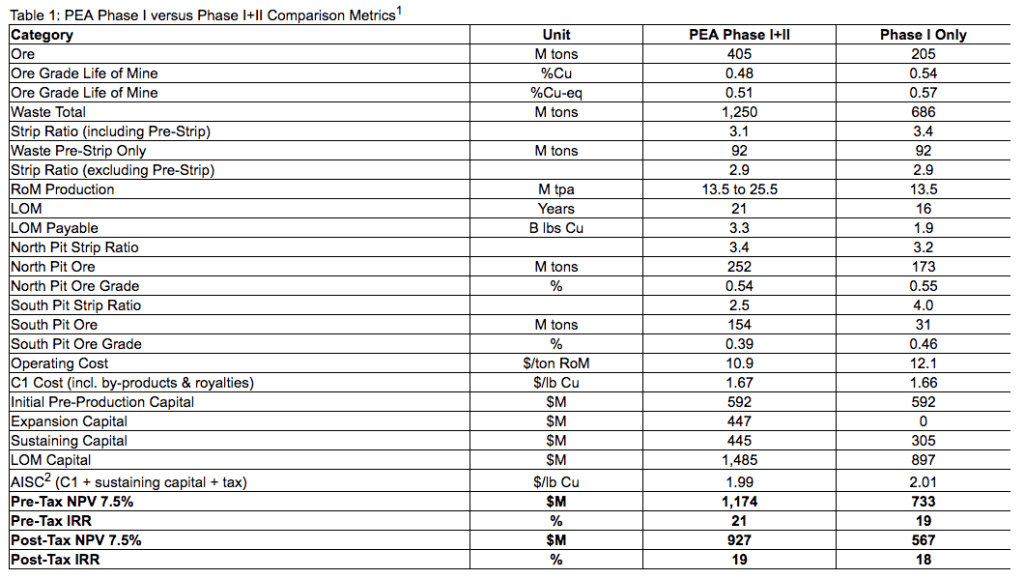 Further highlights of the PEA include:

Qualified Persons
The information and data in this news release was reviewed by Gregory French, P.G., Vice-President Exploration & Project Development of Nevada Copper, Robert McKnight, P.Eng., Executive Vice-President and CFO of Nevada Copper, both of whom are non-independent Qualified Persons within the meaning of NI 43-101, together with the following independent qualified persons:

Notes to Reader on Preliminary Economic Assessments
The Technical Report contemplates two potential options for developing the Pumpkin Hollow mine. Case A (the 2017 Underground PFS) contemplates an underground mine as a stand-alone case and that is not impacted by the results of the PEA, and construction has commenced on the underground project on this basis. Case B (the 2015 Integrated Open Pit and Underground FS) is described as an integrated open pit and underground mine case. Despite the fact that construction has commenced on the underground project, the open pit can be developed and designed (including with regard to surface facilities and services) as an integrated operation for some years to come before Case A and Case B might be considered to become mutually exclusive to one another. The PEA was undertaken to evaluate a different approach to developing the open pit by emphasizing a smaller scale and lower cost operation to the previous studies. The results of the 2017 Underground PFS and 2015 Integrated Open Pit and Underground FS remain valid and represent viable options for developing the Pumpkin Hollow project, with the PEA assessing an alternative development option for the open pit at a conceptual level. The PEA does not change the key assumptions and conclusions set out in the 2015 Integrated Open Pit and Underground FS.

Nevada Copper’s (TSX: NCU) Pumpkin Hollow project is the only major, shovel-ready and fully-permitted copper project in North America. Located in Nevada, USA, Pumpkin Hollow has substantial reserves and resources including copper, gold and silver. Its two fully-permitted projects include: the high-grade Pumpkin Hollow underground project which is in construction with a view to near-term commencement of copper production; and the Pumpkin Hollow open pit project, a large-scale copper deposit with substantial mineral reserves, and which is currently undergoing an optimization program to target a reduced-capex, staged-development approach.

Click here to connect with Nevada Copper Corp. (TSX:NCU) for an Investor Presentation.