Foran Mining Corporation (TSXV:FOM) (“Foran” or the “Company”) is pleased to announce the final results from the 2018 summer resource definition drill program at its 100% owned McIlvenna Bay copper-zinc deposit (“McIlvenna Bay” or the “Deposit”) in Saskatchewan.

Foran Mining Corporation (TSXV:FOM) (“Foran” or the “Company”) is pleased to announce the final results from the 2018 summer resource definition drill program at its 100% owned McIlvenna Bay copper-zinc deposit (“McIlvenna Bay” or the “Deposit”) in Saskatchewan.

“The 2018 McIlvenna Bay infill drill program has been an unqualified success. Tighter drill spacing in the deeper parts of the deposit should upgrade a significant portion of the inferred resources to the indicated category which in turn, should roll into the eventual McIlvenna Bay mineral reserve. Engineering and metallurgical studies are underway and the project is on track to deliver a feasibility study in H2 2019,” commented, Patrick Soares, President & CEO of Foran. “We are working hard to advance McIlvenna Bay towards a production decision we hope will catch the anticipated copper-zinc price rebound.”

This release includes results from five wedges which were drilled off of historic holes to collect representative material for metallurgical studies. The holes targeted a portion of the Upper West Zone (“UWZ”) midway along the plunge of the deposit, where the holes returned thick intervals of contiguous mineralization through the massive sulphide and the underlying Copper Stockwork Zone (“CSZ”), with very high-grade copper and gold results intersected in several holes.

MB-18-109w1 intersected 22.90m of contiguous mineralization grading 3.31% CuEq, from the UWZ massive sulphide and CSZ, including:

The holes contained in this release all targeted the UWZ massive sulphide lens and underlying CSZ of the McIlvenna Bay deposit and were drilled as wedge cuts from historic holes to gather representative sample material from the central part of the deposit for upcoming metallurgical studies. These holes represent the final results from the 36 hole, 12,100m summer drill program at the Deposit which was designed to better define and potentially expand the Deposit in preparation for a revised resource estimate which will feed into ongoing feasibility level studies currently underway.

The summer drill program included a total of 14 wedge cuts drilled to collect additional material for metallurgical samples (six of these were drilled from historic holes which were re-entered to allow spatial representation for metallurgical purposes). See the drill plan map in Figure 1 and the long section in Figure 2 for more information.

The Deposit consists of several distinct zones of VMS mineralization, including massive to semi-massive sulphide from both the Main Lens (Zone 2 and the UWZ) and Lens 3, and stockwork-style sulphide mineralization in the underlying CSZ.

These latest holes were drilled at depths between 300 and 500m below surface. All holes returned significant zones of higher grade, thick contiguous mineralization which generally compared well with the historic results from the parent holes. This area of higher-grade copper +/- gold, in relatively close proximity to surface, may represent an important mining area in the heart of the deposit.

Hole MB-18-141w1 also provided an additional intersection into the “footwall” zone (“Footwall Zone”), which appears to be a probable fault repetition of the Main Lens in the mid-part of the Deposit. The Footwall Zone has now been intersected by 9 holes which define the zone over approximately 100m of strike length. MB-18-141w1 intersected a total of over 73m of copper and/or zinc-rich mineralization in multiple zones in the heart of the deposit. See Table 1 below for detailed assay results from the drill holes included in this release. 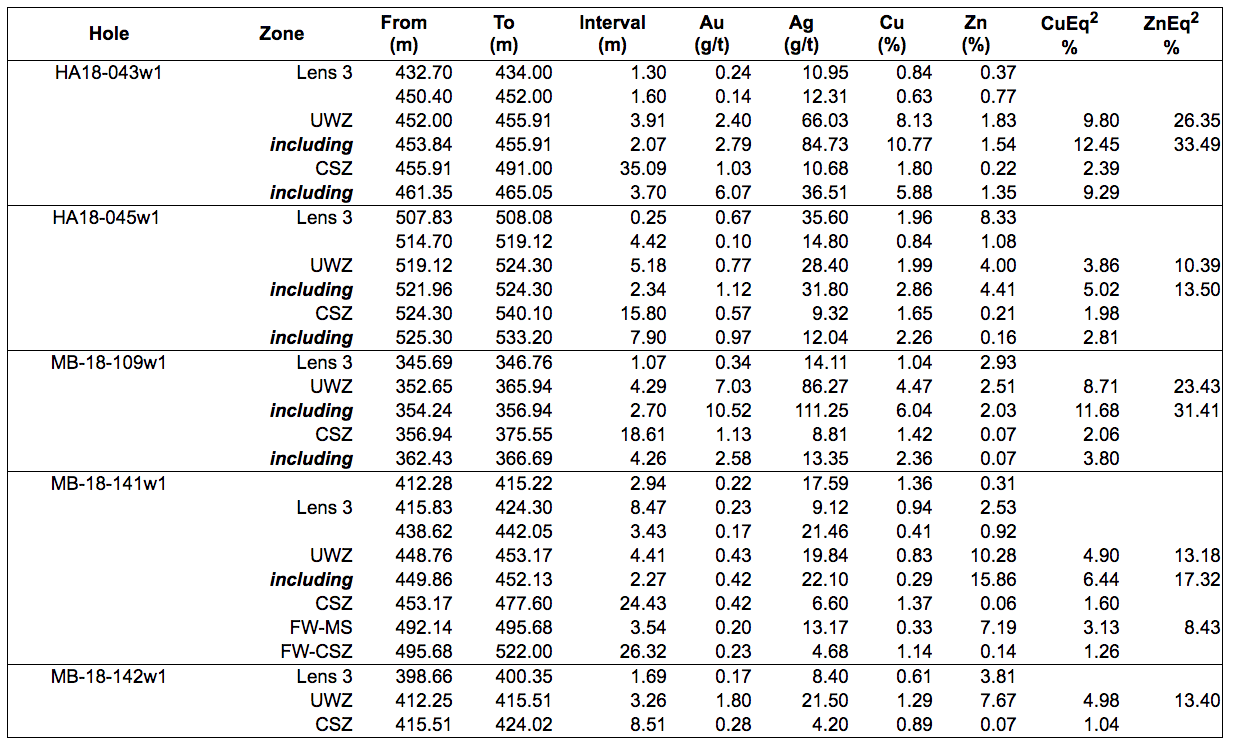 Hole HA18-043w1 was a wedge cut drilled off of the historic hole HA043, completed by Cameco in 1989. The parent hole was re-opened, a modern gyro survey was completed to confirm the location of the hole at depth and then a wedge was drilled to complete another cut through the mineralized horizon to provide both additional material for metallurgical testwork and important information on the variability of the grades within the mineralized zones to assist in resource modelling. HA18-043w1 intersected the deposit approximately 450m below surface and returned zones of similar thicknesses as the parent hole, but higher copper and gold grades. The hole intersected 3.91m from the UWZ grading 9.80% CuEq or 26.35% ZnEq, followed directly downhole by a 35.09m interval of the CSZ grading 2.39% CuEq.

HA18-045w1 was a similar wedge cut completed off of parent hole HA045 also drilled by Cameco in 1989. The historic hole was re-opened and a gyro survey was completed to confirm the location of the hole at depth, followed by the wedge cut to obtain another cut through the mineralization. HA18-045w1 intersected the zones approximately 5m updip of the parent hole and returned a similar thickness as the original, but slightly higher grades, returning 5.18m grading 3.86% CuEq or 10.39% ZnEq from the UWZ followed directly downhole by 15.80m of the CSZ grading 1.98% CuEq.

MB-18-109w1 was a wedge cut drilled from parent hole MB-99-109 drilled by Foran in 1999. Again, the historic hole as re-opened, a gyro survey was completed and a wedge cut was drilled to obtain sample material for upcoming metallurgical test work. In this case, the wedged hole returned similar thicknesses of the UWZ and CSZ, with higher gold and copper values, but lower zinc. MB-18-109w1 returned the highest composite gold grades received from the program, with 7.03 g/t Au and 4.47% Cu over 4.29m intersected in the UWZ or 8.71% CuEq or 23.43% ZnEq. This was followed directly downhole by 18.61m grading 2.06% CuEq from the CSZ.

MB-18-141w1 was a wedge cut drilled off of parent hole MB-11-141 completed by Foran in 2011. This hole intersected the mineralized horizon between 10 and 20m updip from the parent hole and provided an additional intercept into the Footwall Zone, which appears to be a fault repetition of the main lens. The Footwall Zone has now been intersected by 9 drill holes over approximately 100m of strike length and potentially adds another mining horizon in the central portion of the deposit. MB-18-141w1 intersected over 73m of mineralization in 7 discrete zones, including 4.41m grading 4.90% CuEq or 13.18% ZnEq in the UWZ, directly underlain by 24.43m grading 1.60% CuEq from the CSZ. 14.54m below the CSZ the hole intersected another massive sulphide horizon, thought to be equivalent to the Main Lens, grading 3.13% CuEq or 8.43% ZnEq over 3.54m which is directly underlain by 26.32m of a lower stockwork zone grading 1.26% CuEq. Additional modelling will be required to determine the true relationship between this footwall zone and the Main Lens at McIlvenna Bay.

Drilling was completed using NQ size diamond drill core and core was logged by employees of the Company. During the logging process, mineralized intersections were marked for sampling and given unique sample numbers. Sampled intervals were sawn in half using a diamond blade saw. One half of the sawn core was placed in a plastic bag with the sample tag and sealed, while the second half was returned to the core box for storage on site. Sample assays are being performed by TSL Laboratories Ltd. (“TSL”) in Saskatoon, Saskatchewan. TSL is a CAN-P-1579, CAN-P-4E (ISO/IEC 17025:2005) accredited laboratory and independent of Foran. Analysis for Ag, Cu, Pb and Zn is performed using atomic absorption spectrometry (“AA”) after multi-acid digestion. Au analysis is completed by fire assay with AA finish. Any samples which return results greater than 1.0 g/t Au are re-run using gravimetric finish. A complete suite of QA/QC reference materials (standards, blanks and pulp duplicates) are included in each batch of samples processed by the laboratory. The results of the assaying of the QA/QC material included in each batch are tracked to ensure the integrity of the assay data.

Foran is a copper-zinc exploration and development company with projects located along the Flin Flon Greenstone Belt. The McIlvenna Bay Project, Foran’s flagship asset located within the Hanson Lake District, sits just 65 kilometres from Flin Flon, Manitoba and is part of the world class Flin Flon Greenstone belt that extends from Snow Lake, Manitoba, through Flin Flon to Foran’s ground in eastern Saskatchewan, a distance of over 225 kilometres. McIlvenna Bay is the largest undeveloped Volcanogenic Massive Sulphide (“VMS”) deposit in the region. This world class metallogenic belt is host to 29 past and present producing mines, including Hudbay Minerals Inc.’s 777 and Lalor operations. The Company recently completed a resource definition and infill drilling program in preparation for producing a feasibility study on the McIlvenna Bay deposit.

On December 4, 2017, Foran announced the execution of a Technical Services Agreement with Glencore Canada Corporation (“Glencore”). Glencore has agreed to provide technical expertise and advice in order to advance the McIlvenna Bay deposit to feasibility in exchange for an off-take agreement on the metals and minerals produced from the Deposit.

Roger March, P.Geo., Vice President, Exploration for Foran and a Qualified Person within the meaning of National Instrument 43-101, has reviewed and approved the technical information in this release.

Foran trades on the TSX.V under the symbol “FOM”.

Neither the TSX-V nor its Regulation Services Provider (as that term is defined in the policies of the TSX-V) accepts responsibility for the adequacy of this release. No stock exchange, securities commission or other regulatory authority has approved or disapproved the information contained herein.

Forward Looking Statements
This news release contains forward-looking information which is not comprised of historical facts. Forward-looking information involves risks, uncertainties and other factors that could cause actual events, results, performance, prospects and opportunities to differ materially from those expressed or implied by such forward-looking information. Forward looking information in this news release includes, but is not limited to, Foran’s objectives, goals or future plans, statements regarding the Technical Services Agreement and, if a feasibility study will suggest an economically viable project, estimation of mineral resources, exploration results, and potential mineralization,. Factors that could cause actual results to differ materially from such forward-looking information include, but are not limited to, work performed under the Technical Services Agreement related to preparation of a feasibility study, the failure of such study to suggest an economically viable project, failure to convert estimated mineral resources to reserves, capital and operating costs varying significantly from estimates, the preliminary nature of metallurgical test results, delays in obtaining or failures to obtain required governmental, environmental or other project approvals, political risks, uncertainties relating to the availability and costs of financing needed in the future, changes in equity markets, inflation, changes in exchange rates, fluctuations in commodity prices, delays in the development of projects and the other risks involved in the mineral exploration and development industry, and those risks set out in Foran’s public documents filed on SEDAR. Although Foran believes that the assumptions and factors used in preparing the forward-looking information in this news release are reasonable, undue reliance should not be placed on such information, which only applies as of the date of this news release, and no assurance can be given that such events will occur in the disclosed time frames or at all. Foran disclaims any intention or obligation to update or revise any forward-looking information, whether as a result of new information, future events or otherwise, other than as required by law.

Click here to connect with Foran Mining Corporation (TSXV:FOM)  for an Investor Presentation.