Copper prices hit a fresh two-year high on Monday (July 31), closing the month 7 percent higher at $6,347.11 per tonne. The rise was supported by upbeat Chinese data, supply disruptions and a weaker dollar.
Recent news about a potential Chinese ban on some copper scrap imports sent signals of a possible demand boost for refined copper later this year. On top of that, Chinese data shows that although there was less manufacturing activity in July, the factory sector is still expanding.
“Confidence in a second-half slowdown is somewhat softening and this is then reflected in a more positive assessment of industrial metals given they are so closely related to the Chinese economy,” Carsten Menke, an analyst at Julius Baer, told Reuters.
China is the world’s top copper consumer, and has imported about 23 million tonnes this year. 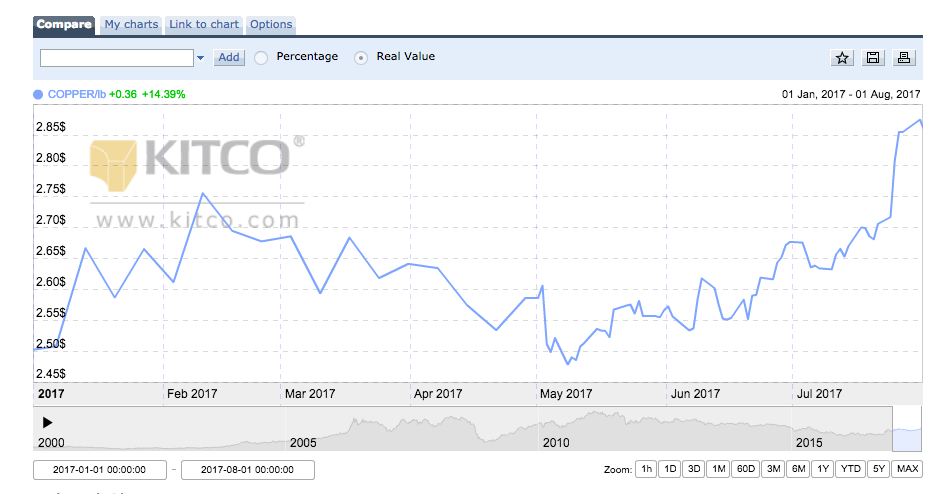 Chart via Kitco.
Aside from positive Chinese data, supply disruptions earlier this year at the world’s top copper mines — BHP Billiton’s (ASX:BHP,NYSE:BHP,LSE:BLT) Escondida and Freeport-McMoRan’s (NYSE:FCX) Grasberg — also pushed prices higher.
“It would be foolhardy to rule out the possibility of further disruptions, especially with a number of major contracts up for expiry in coming months,” said Karen Norton, senior analyst at Thomson Reuters GFMS.
A weaker dollar also supported prices, as a softer greenback makes commodities priced in dollars cheaper for investors using other currencies.
Looking ahead in 2017, Citi analysts have said that the market could see a tight balance for the full year. “Constructive global macro data should keep the market excited for the next few months, but sell-off pressure may also build as the market moves into weak demand season,” CNBC quotes them as saying.
Similarly, analysts at BlackRock see global economic expansion and good demand from China and emerging markets providing support for prices.
“We see signs that reduced supply and increased demand may be more than temporary and are likely to help keep industrial metals prices stable from here,” they said in a note.
Other analysts, such as Commerzbank’s (ETR:CBK) Daniel Briesemann, remain more cautious. He is not as optimistic about the recent Chinese reports.
“We have a more cautious stance on China as new measures implemented by the authorities could in fact slow demand — for example, the moves to cool down the overheated property sector,” he said.
That said, many market participants remain bullish on the red metal in the long term. That’s the case for billionaire mining magnate Robert Friedland, who explained why he believes copper will continue to outperform gold at this year’s Sprott Natural Resource Symposium. Click here to read the full article.
Don’t forget to follow us @INN_Resource for real-time news updates!
Securities Disclosure: I, Priscila Barrera, hold no direct investment interest in any company mentioned in this article.