What’s the copper outlook for 2019? Read on to learn what analysts see coming for the red metal next year.

Market watchers expected the copper price to be much higher in 2018, and the trade war has been blamed for what turned out to be a lousy year for the red metal.

But what ended up being a downer of a year started out on a tame note. Copper bumbled through the first six months of 2018 not going anywhere in particular, barely reaching above its starting value of US$7,180.50 per tonne.

It took US President Donald Trump and his campaign promises to make its value change course — though not in a direction market participants wanted it to head.

With the year at an end, the Investing News Network (INN) has asked analysts in the field for their thoughts on what’s ahead for the vital base metal. Read on for their predictions.

When 2017 came to a close, analysts predicted that the copper price would pick up through 2018 and into 2019 — pointing to demand from China and a possible continuation of that year’s labor anguish.

As 2018 rolled on, copper hit a high point in June, peaking at US$7,261.50 right before the US-China trade war kicked in. That yearly high wasn’t much to shake a stick at though, at only 1.13 percent above where the copper price began on January 1.

As can be seen on the London Metal Exchange chart below, the main feature for the copper price in 2018 was a huge fall between mid-June and late July as investors realized that the trade war was for real. 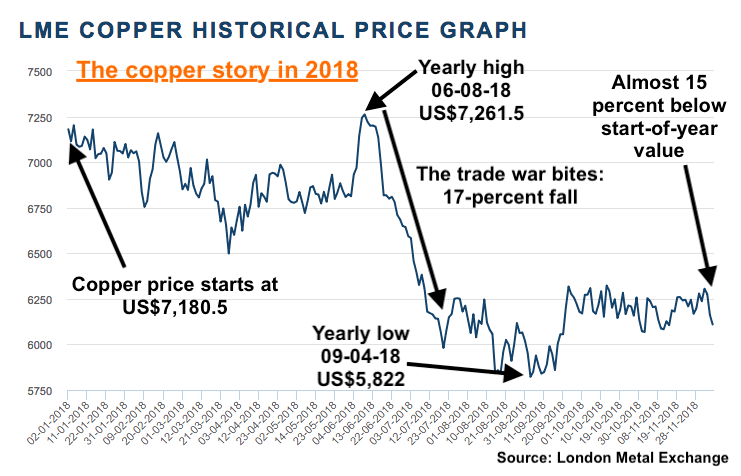 Dan Smith, head of commodities research at Oxford Economics, told INN that analysts were “too optimistic about copper” in 2018. “Chinese demand turned out to be weaker than expected and the drag from [the automotive sector] has been significant,” he said.

At the end of 2017, Oxford Economics was “optimistic about the macro story” for copper, pointing to Chinese demand increasing and copper stockpiles depleting.

While stockpiles are indeed falling and the supply line is thin, Chinese demand took a slight hit through the year with growth numbers not as high as anticipated — and don’t forget the impact of investor sentiment through the trade war.

Staying with the trade war, Stefan Ioannou of Cormark Securities said it was the story of 2018 — and not just for copper. “It was definitely the trade war in there that dominated copper and the greater base metals sector this year.”

He said that while supply disruptions dominated 2017 — and to an extent early 2018 — the trade war soon took over, pushing copper down to a rock-bottom value, which Ioannou suggested was a hard low.

“The prices did come down [in 2018], but I think there was some rationalization as well that it can only go so low before it starts getting a bit ridiculous,” he noted.

Eleni Joannides of Wood Mackenzie agreed that supply disruptions occurred “at a much slower pace than we had anticipated at the start of the year,” though she said that disruption instead came in the form of Vedanta’s (NSE:VEDL) Thoothukudi smelter in India going offline, Glencore’s (LSE:GLEN) Pasar smelter in the Philippines suffering a failure in early January and “slower-than-anticipated ramp ups at some of the new smelters in China.”

Of course, Joannides also said the trade war didn’t help, while there was lots of focus on Chinese policy around scrap imports and changes to emissions regulations impacting production.

As of mid-December, copper was up off rock bottom, trading well above US$6,000, but still almost 15 percent down on the start of the year at US$6,110.

Joannides said that at Wood Mackenzie, analysts are detecting signals that both supply and demand could be a concern in 2019, as “there are signs that the global economy is continuing to slow and there is raising concerns about the overall health of demand in the coming year.”

“The ongoing trade spat between the US and China could have severe knock-on implications on global growth,” she said, noting that the G20 summit in Buenos Aires could act as a possible mitigator to negative sentiments.

As seen by the jump in stocks during the summit on the back of good vibes, and Trump’s subsequent tweets that plunged the markets back into disarray — that didn’t go so smoothly.

“There are no signs that the impact of the trade war on copper prices will ease in the next 12 months,” she said. “In terms of supply, questions remain as to how the changes to emissions limits for Chinese smelters will impact production.”

She said it was also the case for Chile, with new sulfur capture targets that could limit existing smelter capacity, while the Thoothukudi shutdown remains an unknown.

Ioannou said that looking into 2019 and what the future holds for the copper story, “with Trump, never say never … he continues to deal it.”

He added, “I think as long as Trump continues prodding the Chinese, the Chinese will continue to respond, and that’s going to continue to cause uncertainty in the marketplace.”

The fear factor around the trade war is wearing off now as investors have gotten used to the rhetoric, said Ioannou. “I think it is to a certain point crying wolf now.”

Despite depressed prices, he added that a looming copper supply deficit has the potential to raise prices in the medium to long term — a sentiment that has been noted by analysts all through 2017 and 2018.

“[There are] not many new large-scale copper developments over the last five to 10 years,” said Ioannou.

“And so, as existing mines run their course and deplete reserves … there are really not a lot of new projects that are poised to come on quickly to replace the production when it’s lost.”

There are still projects on the go though, he said, pointing to Zijin Mining’s (HKEX:2899) splurge in Serbia on Nevsun Resources’ (TSX:NSU) Timok project and the RTB Bor copper complex.

“The good projects are getting loved.”

On Chinese demand, he isn’t too worried, and noted that the world’s largest copper consumer’s GDP growth is not falling, but is simply slightly behind expectations on a percentage basis.

“Even if we were to see GDP growth drop significantly on a percentage basis, there’s still a lot of copper that needs to go to China just to maintain their current demand and growing demand going forward,” Ioannou said.

Joannides pointed to First Quantum Minerals’ (TSX:FM) Cobre Panama asset as a major new project coming online in 2019, calling it “the only greenfield project of note” ready for startup through the next 12 months. “But this is unlikely to influence the direction of the copper price.”

She also said that Peru’s Andean neighbor Ecuador is beginning to look promising for copper, noting that it “looks as though it is encouraging mining investment, but from a very low base, and long term.”

Besides the obvious market to watch — China — Joannides said that the rest of Asia (excluding China) “is a region of project robust growth.”

Smith said that in terms of projects, Rio Tinto’s (ASX:RIO,LSE:RIO,NYSE:RIO) Oyu Tolgoi project in Mongolia is shaping up to have a “lot of risk … and this is important.” Through 2018, Oyu Tolgoi has been dogged with development issues mostly due to happenings in Ulaanbaatar.

On prices, Joannides said that Wood Mackenzie “expect[s] copper prices on an annual average basis to trend higher on the basis that demand growth will outpace that of supply, pulling stocks in days of consumption sharply lower.”

However, she continued, “the extent of the price recovery could yet be capped by the ongoing uncertainty over the health of the global economy, as well as the potential for further US interest rate rises, which would lead to a stronger dollar and would weigh on prices.”

Smith said he expects the US dollar to weaken, “which will boost copper and equity markets.”

In their commodity price forecast for October 2018, economists at Oxford Economics said that despite not being so fantastic for base metals, “fundamentals still look supportive” through the sector. Copper stockpiles on the London Metal Exchange were down 30 percent month-on-month at the time.

The economists predict that while there is still going to be lots of volatility for copper going forward, “prices should trend higher overall” over the next few months into early 2019.