Copper futures ended nearly flat Thursday, supported by some better-than-expected US economic data; however, futures remained under pressure due to the sentiment that the global economy is barreling towards another recession. 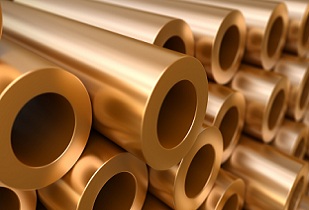 Copper futures ended nearly flat Thursday, supported by some better-than-expected US economic data; however, futures remained under pressure due to the sentiment that the global economy is barreling towards another recession. Copper futures have spent the past few weeks reacting in a knee-jerk fashion to every item of economic chatter. On Wednesday, the red metal fell to a 13-month low, as Eurozone members stalled in coming up with a solution to the region’s debt crisis.

On Thursday, the optimistic data released from the United States included the fact that the number of workers filing new claims for unemployment benefits fell sharply last week, and that the US economy expanded more than previously thought in the second quarter as consumer spending strengthened. While neither of these data points provide enough of a signal that the world’s largest economy will avoid a second dip, it did help copper stabilize after yesterday’s drastic losses. In early trading hours, copper prices continued their decent- and at one point were down 6 percent, however, after the US data copper prices pared losses, and on the LME hit a session high of $7,267 a tonne.

Copper futures have slumped 23 percent this month through Wednesday’s close, as this crisis in the Eurozone, and slow manufacturing figures out of both the United States and China, the world’s largest and second largest economies, respectively, have prompted many investors to curb their growth expectations.

A sense of relief that the Eurozone would come up with a solution also pacified the markets. On Thursday, Germany approved a beefed-up bailout fund, in their Bundestag (lower house of parliament) with more support than expected, which, in turn spread sentiment that the country is committed to come up with a solution to the Eurozone’s debt crisis. Still, many investors are nervous that a Eurozone crisis is imminent, and that it will have dire consequences on the global financial markets.

However, analysts predict that the relief will be short lived. “There are concerns about the weakness in Europe and how that will impact growth in emerging markets. Market sentiment with regards to European growth over the next six months or so has turned very bearish and the concerns are about the implications on demand for China’s exports,” said Gayle Berry, analyst at Barclays Capital (NYSE:BCS). According the Edward Meir, senior commodities analyst at MF Global expects today’s upward trend will be short lived. “The data was reasonably positive and the German vote was also significant and this is prompting a bit of a recovery in a number of markets,” said Meir. “You are going to have these big swings of direction until we know what is happening with the Eurozone.” According to a Bloomberg survey, most analysts are pessimistic about the Eurozone’s future. The Bloomberg survey found that 72 percent of global investors expect that the Eurozone will abandon the euro as a shared currency within five years. Moreover, about a third of the respondents forecast that the region’s debt crisis will lead to a financial meltdown and social unrest within one years’ time.

Workers at Freeport-McMoRan Copper & Gold Inc.’s (NYSE:FCX) Cerro Verde copper mine in Peru went on strike Thursday, the third work stoppage in a month, after wage negotiations between the miners and the workers union fell apart. According to Peru’s labour ministry, the strike is legal, which bars the company from hiring outside contractors. Talks have made little progress as the company isn’t even meeting half our demands,” said Leoncio Amudio, General Secretary of the workers union.  “This strike will probably last longer than last time unless we reach an agreement, added Amudio. Meanwhile, Freeport is dealing with another labour disruption, at is Grasberg mine in Indonesia. Talks between the Grasberg union and the company are scheduled to resume tomorrow, after talks stalled earlier this week as the two sides p failed to reach an agreement on a pay rate increase.