Zenabis Global (TSX:ZENA) is the latest marijuana company to strengthen its play in the cannabis-infused beverages ring.

Less than two months out from the legalization of edible and infused cannabis products in Canada, the BC-based company has signed an agreement with an undisclosed Canadian beverage technology company. This partner will supply Zenabis with plain water-soluble cannabis-infused inputs.

The announcement, sent out after trading hours on Monday (August 26), confirms that the company plans to develop its own drinks with an onset time of less than five minutes. Onset time refers to how long it takes for a beverage to affect the user.

In an interview with the Investing News Network (INN), Andrew Grieve, CEO of Zenabis, said the decision to move towards cannabis-infused beverages was designed as a way to challenge the alcohol market’s dominance in the recreational beverage space.

“Alcohol has had a monopoly on the recreational experience in the market for an incredibly long period of time,” Grieve told INN. “As a result, people have not had an alternative.”

He added that he thinks the highly controlled physical effects of cannabis drinks will make them more attractive than their alcoholic counterparts.

“I believe that, if you have a beverage technology with a known onset and offset and limited calories and the flavor profile that people want, people will choose a cannabis infused-beverage for their recreational experience over an alcoholic beverage,” he told INN.

The company plans on both recreational and wellness drink lines.

Grieve didn’t give any details about the beverage technology company Zenabis is working with, but did say its name will be released once the products are available to consumers.

As part of the announcement, Grieve confirmed these beverages will launch in Canada following the legalization of edibles and infused products.

The executive said his company’s drinks will be infused without any effect on taste or smell. In his view, this is a benefit compared to competitors planning to launch their own beverages.

Grieve cited a report from Deloitte, which estimates that the next round of cannabis legalization could create a C$2.7 billion market in Canada, with beverages contributing a significant part of yearly profits.

Zenabis has experienced a small swing upward since shares opened on Tuesday (August 27) at C$1.07. The company closed the day at C$1.05, representing a 2.94 percent jump for the day. 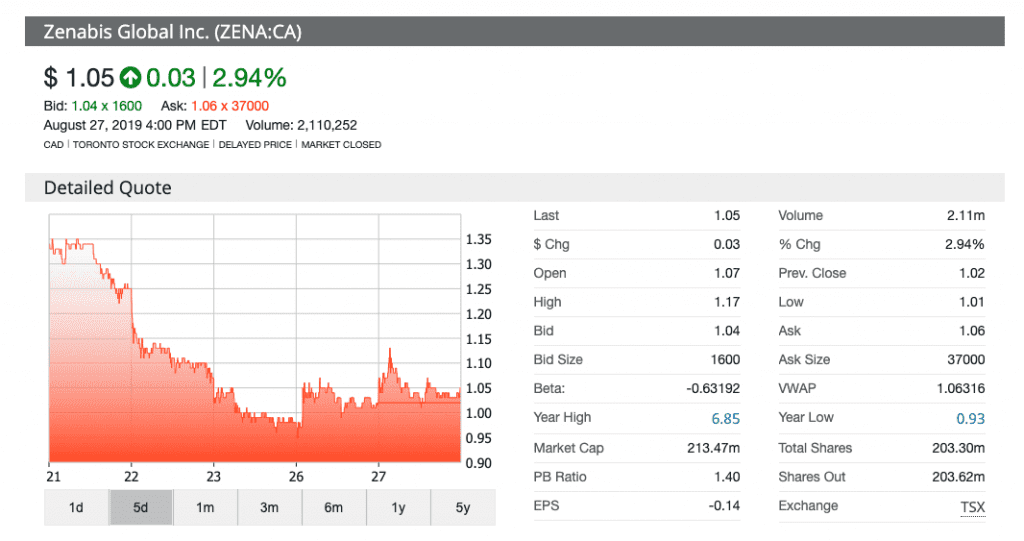 Zenabis will use the beverage inputs to produce a variety of tetrahydrocannabinol- (THC) and cannabidiol- (CBD) infused drinks, ensuring that it adheres to the rules on these products, which are set to come into effect on October 17. Federal legislation limits the amount of THC in food and drinks to 10 milligrams of THC per package.

“It is expected that a limited selection of products will appear gradually in physical or online stores, and no earlier than mid-December 2019,” Health Canada said.

One product Zenabis already has in the works is a CBD-infused kombucha line to be created with True Büch, a cultured tea beverage maker in which Zenabis acquired a 51 percent stake earlier this year.

Various players in the Canadian marijuana industry have expressed interest in the launch of infused beverages. Additionally, a selection of established beverage makers have signed partnerships with cannabis companies to lend expertise on the development of these drinks.

Among others, Zenabis is joining the likes of Dixie Brands (CSE:DIXI.U,OTCQX:DXBRF) in the cannabis beverage arena. The Colorado-based cannabis company announced a partnership with drink maker AriZona to create a line of THC-infused drinks this month.

HeavenlyRx, a CBD wellness company, has also moved into the cannabis beverage space with an investment in craft pop maker Jones Soda (OTCQB:JSDA). It plans to create a Jones-branded line of CBD-infused drinks.

In its results for Q2 2019, Zenabis reported cultivating over 2,400 kilograms of dried cannabis, exceeding its forecast by 40 percent. The report also notes an increase in annual production capacity at its facility in Atholville, New Brunswick, to 46,300 kilograms up from 34,300 kilograms.

Grieve told INN that the company also plans on rolling out edible cannabis-infused products, including gummies and chocolates, and hopes that both its cannabis food and beverages will hit shelves by December or the first quarter of 2020.