Shares of Canadian cannabis company TerrAscend (CSE:TER), which is also looking into US interests, were down following the launch of its Q3 financial report on Wednesday (November 21).

TerrAscend reported revenue of C$1.8 million as it followed through on supply deals for adult-use bulk product to Canadian provinces.

However, on Wednesday’s trading session, shares of the company were down 2.23 percent. The stock reached a high of C$7.42 during the day but ended up settling with a price of C$7. 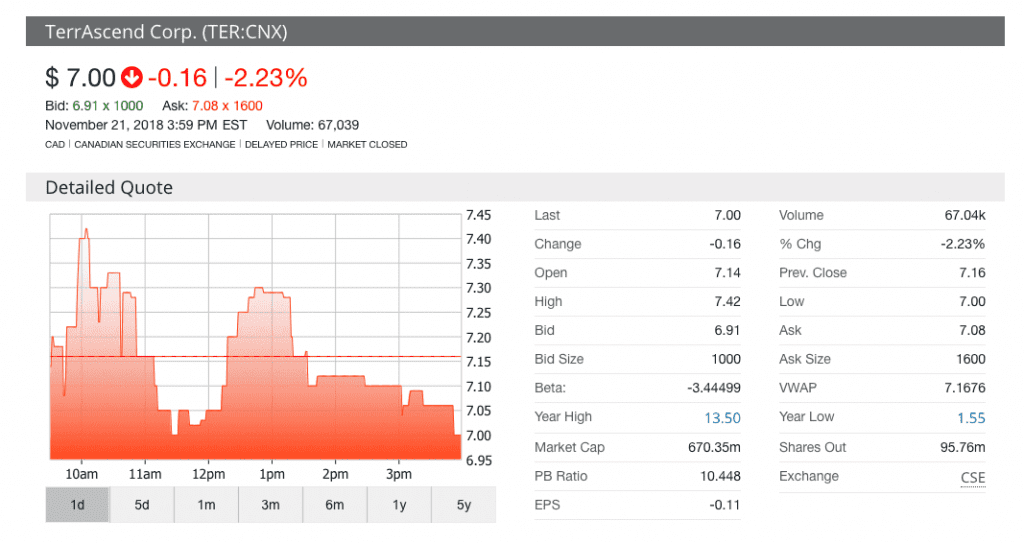 At the end of the quarter, TerrAscend also reported a loss of C$2.8 million which represents a C$0.03 loss per share.

The company’s losses were dominated by its controlling interests. At the end of the quarter the company held a C$15.1 million cash and equivalents stash.

“TerrAscend’s goal is to become the leading multi-state operator in the US cannabis industry while continuing to capitalize on sizeable opportunities in Canada and the rest of the world,” Michael Nashat, TerrAscend’s president and CEO, said in a statement.

In October the company revealed its intentions to gain a presence in the fractured US cannabis market.

An estimate from Haywood Securities indicates the US cannabis market will be worth US$23 billion in 2025.

Launching a vertically integrated multi-state operator of cannabis assets in the US has become a popular play and has started to attract the attention of investors.

TerrAscend is in the unique position as itcounts with the backing from one of the biggest Canadian licensed producers (LPs) around.

Canopy Growth (NYSE:CGC,TSX:WEED) and its investment arm Canopy Rivers (TSXV:RIV) have made investments in TerrAscend that manoeuvre the regulations in place from the TMX Group.

Companies on the Toronto Stock Exchange (TSX) and TSX Venture Exchange (TSXV) are not permitted to directly have assets in the US cannabis market due to the federal illegality of the drug.

However, the two investing companies shuffled the actual investment through a change in the shares being purchased.

“In the future, if the rules for the TSX change, which could happen without full legalization, or if cannabis is legalized federally, then Canopy and Canopy Rivers will be able to convert their securities into common shares,” Brochstein wrote in his weekly column to investors.

In a previous statement Bruce Linton, acting CEO of Canopy Rivers and co-CEO of Canopy Growth, said the restructuring was done in order to “create long-term value for our shareholders as it positions the Company with optionality and conditional future exposure to a significant new market.”

According to the full financial report, neither of the companies TerrAscend has invested in for the US market — Well and Good and Neta NJ — will start operations until the reorganization with its key investees is complete.

Nashat said the company’s premium brand “Haven St.” has started to “resonate” with consumers in Canada.

The company started selling medical cannabis in April according to company documents.

Based on 11 reviews in the cannabis review site from Lift & Co. (TSXV:LIFT), the brand has a 4 star rating.

In Ontario, the brand counts with eight different products available on the OCS online store.

As of September 30, the company counted with 2,066 cannabis plants as its biological assets. The company reported owning C$4,742 worth of externally purchases cannabis oils.

Codebase Ventures Inc. (“Codebase” or the “Company”) (CSE:CODE)(FSE:C5B)(OTCQB:BKLLF) announces it has completed a first closing of a non-brokered private placement of up to $2,000,000. The Company accepted subscriptions for 13,740,000 units at a price of $0.05 per unit, for gross proceeds of $687,000. Each unit consists of one common share and one common share purchase warrant. Each warrant entitles the holder to purchase one additional common share at $0.075 for a period of two years from the date of closing, subject to the option of the Company to accelerate the expiry date in the event that its shares trade at $0.15 or more for 10 consecutive days

The Company paid $18,000 in cash and issued 160,000 warrants on the same terms as noted above to qualified finders. Securities issued pursuant to this tranche are subject to trading restrictions until April 5, 2021. The Company is expecting to complete the financing by December 16, 2020. Proceeds will be used for working capital and to fund future investments.

For anybody wishing to exercise these Warrants, please contact the Chief Executive Officer, Terry Donnelly at the particulars below.

TransCanna Holdings Inc. (CSE: TCAN) (FSE: TH8) (“TransCanna” or the “Company”) is pleased to announce that it has closed the 2nd and final tranche of its Unit financing. In connection with the closing, the Company issued 1,356,873 Units at a price of $0.55 per Unit, for gross proceeds of $746,280.15. Each Unit consists of one (1) common share and one (1) warrant. Each warrant entitles the holder to purchase one common share of the Company, at an exercise price of $0.75 per share, for a period of two years from the date of issuance. The warrants are subject to an acceleration right that allows the Company to give notice of an earlier expiry date if the Company’s share price on the CSE (or such other stock exchange the Company’s shares may be trading on) is equal to or greater than $1.25 for a period of 20 consecutive trading days. Finder’s fees of $42,542, 3,200 Finder’s shares and 80,550 Finder’s warrants were issued in connection with finder’s fees payable.

Sweet Earth Holdings Corp. (CSE: SE) (FSE: 1KZ1) (OTCQB: SEHCF) (“Sweet Earth” the “Company”) is pleased to announce that it has received full Depository Trust Company (“DTC”) eligibility in the United States. On October 20, 2020, Sweet Earth announced that its shares had been listed on the United States’ Over-The-Counter Bulletin (“OTCQB”) under the ticker SEHCF.

DTC status means that Sweet Earth shares are now eligible to be transferred between brokerage accounts within the United States and significantly augments the ease in which American-based investors are able to trade Sweet Earth shares.

Next Green Wave Appoints Ben Kovacs to Its Board of Directors