Canadian pharmacy Shoppers Drug Mart has entered the fray of medical cannabis sales with launch of its online commerce hub.

Shoppers, a subsidiary of Loblaw Companies (TSX:L), announced on Tuesday (January 8) the official launch of its medical cannabis e-commerce portal.

In total the store opened with 24 medical cannabis offerings from the various licensed producers (LPs), with an additional product list for accessories including vaporizers.

The move represents another validation of the medical cannabis market as an established retail brand in Canada adopts the industry and its participants.

“As medical cannabis is increasingly prescribed to Canadians for its therapeutic benefits, our goal is to enhance the service and support that patients receive through this process,” Jeff Leger, president of Shoppers, said.

In an intro video for the website, Shoppers explained consumers will need to register manually or through a doctor. The pharmacy also assembled a support group called the cannabis care advisors to aid customers with questions on products or doses.

Currently the service is only available for medical patients in Ontario. A warning message on the Shoppers site says the retailer is working to expand its service to the rest of Canada.

In its announcement, Shoppers revealed it is offering education to pharmacists through the a medical advisory board.

The platform from the prominent Canadian pharmacy offers cannabis products from eight different LPs, with five public ones and three being subsidiaries of the public producers, including: 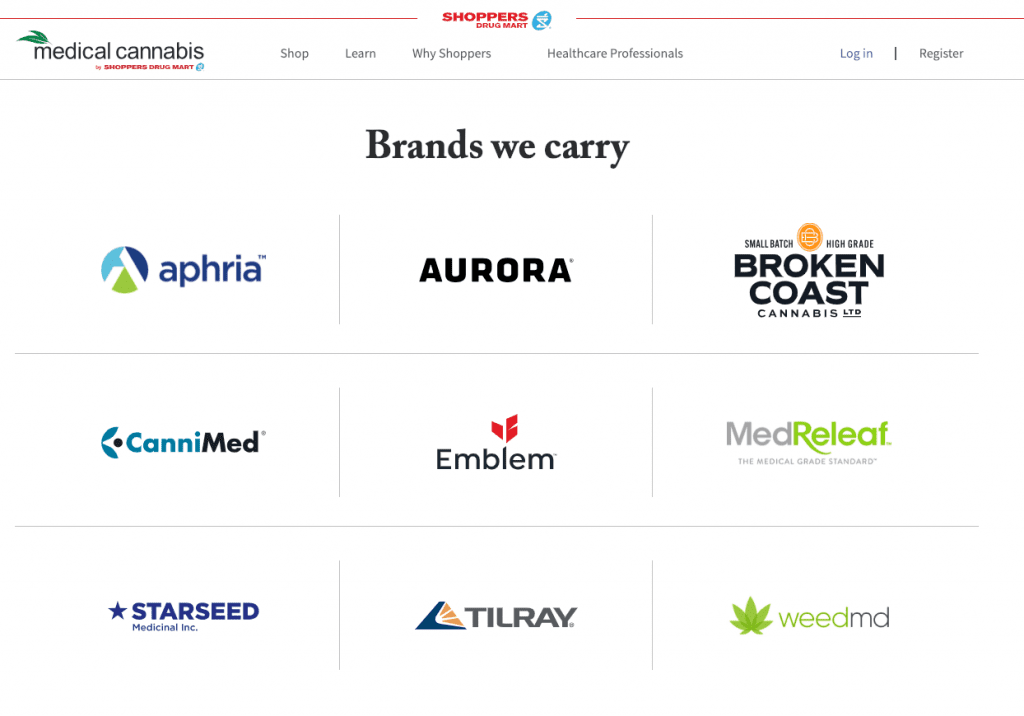 In a statement Nick Dean, CEO of Emblem, said accessing various distribution channels for his company’s products was a critical factor in its strategy.

Shoppers signed supply agreements with the producers it now lists on its new site throughout 2018. The amount of product the retailer took from each producer was undisclosed.

In December, Shoppers announced it had officially obtained its sale license from Health Canada, which allows it to sell dried flower, seeds and oils.

Update: Flowr joins the ranks of LPs with supply deals with Shoppers

On Wednesday (January 9) The Flowr Corporation (TSXV:FLWR) announced it had secured a supply agreement with Shoppers to begin offering its product on the new medical cannabis online shop.

Tom Flow, Flowr’s Co-CEO, called the agreement a “game-changing opportunity” for the company and its medical products.

The supply deal between Flowr and Shoppers will last three years, with an additional two year renewal term in the agreement.

The producer expects the direct-to-patient online exclusivity for its medical FlowRx products to “significantly increase its sales of medical cannabis products in Canada.”

Shares of Flowr in Toronto closed on Wednesday with a price of C$4.55, an increase in value of 4.60 percent.

In an email response, a Loblaw Companies representative told the Investing News Network (INN) Shoppers is exploring opportunities with other LPs but wouldn’t confirm any other new deals.

“We have signed supply agreements with [10 LPs] and will be introducing more products in the coming days and weeks from them.”

Editorial Disclosure: Emblem and The Flowr Corporation are clients of the Investing News Network. This article is not paid-for content.