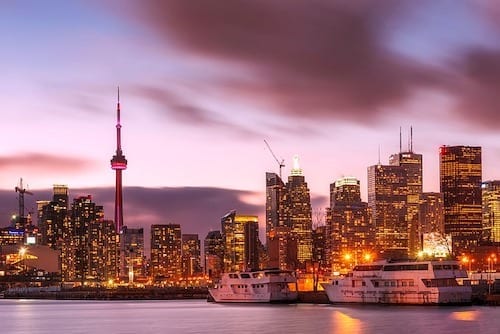 INN brings investors a recap of some of the highlights from the Benzinga Cannabis Capital Conference in Toronto.

Cannabis investors gathered in Toronto this week for the Benzinga Cannabis Capital Conference. They heard from leaders of the industry on what the next steps for the entire sector look like.

The two day event kicked off on Wednesday (April 17) with in-depth panel discussions on smart cannabis investments and the potential of expanding a Canadian business into the US.

Following a keynote speech from KushCo Holdings (OTCQB:KSHB) President Jason Vegotsky, investors heard a panel of experts discuss how Canadian firms may position for entry to the US and other international expansion plans.

Alfred Avanessy, managing director of Cormark Securities, said the Canadian experience has involved a “rush to scale,” meaning a lot of merger and acquisition activity.

“If you look at the Canadian experience, the companies that end up becoming the leaders and the ones that attracted what we now talk about as the strategic dollars … were the ones that moved the fastest, quickest, and there was a lot of acquisition to achieve that growth rate.”

During his keynote, Steve White, CEO of Harvest Health & Recreation (CSE:HARV,OTCQX:HRVSF), credited the management team of Canopy for its ability to stay ahead of competitors.

The event dedicated some time to the evolving Canadian market, with a panel hosting representatives from a group of Canadian firms.

The panelists were asked about concerns regarding supply issues in the country, and the expectations on oversupply for the northern market.

“I think at the end of the day, right now it’s about developing our international business and understanding beyond Canadian borders what kind of opportunities present themselves,” he said.

He added his company has put an emphasis on making sure to make the “right relationships” when it comes to the partners available for international expansions.

”Don’t forget the fundamentals. You need a good management team, a business model and advisors who can help you.”

Later in the day, Tim Seymour, chief investment officer of Seymour Asset Management and frequent contributor to CNBC’s “Fast Money,” moderated a discussion on how to make the right investment in the cannabis space.

His first question to the panelists related to whether there’s more value to be found in the public or private markets.

Matt Hawkins, managing principal at Cresco Capital Partners, said private investments are the most attractive for his firm.

Narbe Alexandrian, president of Canopy Rivers (TSXV:RIV,OTC Pink:CNPOF), agreed with Hawkins and highlighted the talent rising from the cannabis private sector. “I do think there’s a lot of value in private companies right now, in the sense that there’s a lot of hidden talent,” he said.

Alexandrian added that he has noticed a variety of people switching from established tech firms for marijuana opportunities.

“Folks [are] coming out of the CPG realm, traditional family brands trying to create brands in the cannabis space that their parent companies wouldn’t touch, so you’re seeing a lot of opportunity on the private side, which I call the disruptors,” the executive for the investment firm said.

The panel also discussed one of the most difficult elements of evaluation in the cannabis space: experience and success with management teams.

Jon Trauben, partner with venture capital fund Altitude Investment Management, said that evaluating the team at a company can be more complicated than valuations.

“It’s great when we have experienced people coming from an outside industry [and] bringing their skillset here,” Trauben said.

When it comes to valuations, Tahira Rehmatullah, managing director at venture capital fund Hypur Ventures, said in this space it is usually not a straightforward affair.

“Valuations are definitely an art, not a science, so those are always moving targets. You’ll find somebody value one company at 15 times revenue, and then another one will say ‘no, I’ll give you one time, that’s what I think the value of the company is,’ and it’s that broad of a range.”

With the increased attention on MSOs, a panel of executives from public firms such as iAnthus Capital Holdings (CSE:IAN,OTCQX:ITHUF), Trulieve Cannabis (CSE:TRUL,OTC Pink:TCNNF) and MedMen Enterprises (CSE:MMEN,OTCQX:MMNFF) discussed the landscape for this market.

Kim Rivers, CEO of Trulieve, said she expects to see more merger and acquisition activity as the competition between MSOs continues its ramp up.

Near the end of the first day, investors took in a conversation between Richard Carleton, CEO of the Canadian Securities Exchange, and Charlie Bachtell, CEO of MSO Cresco Labs (CSE:CL,OTCQX:CRLBF).

The cannabis executive was asked for his perception on the differences in valuation between Canadian companies and the popular MSOs, which trade at a significant discount from their Canadian counterparts.

“I think you’re seeing these closing of the gaps, you’re seeing higher valuations, lower market caps on some of the fellow peers on the US side. I think the obvious advantage right now is that those Canadian operators have access to the US capital markets,” Bachtell said.

However, Bachtell added that, once legislation changes take place in the US, that will change.

“As soon as those institutions and the US retail investor has the ability to readily and easily invest in US operators, I think you’re going to see a transition there,” he said.

One response to “Notes from the Floor: Benzinga Cannabis Capital Conference”