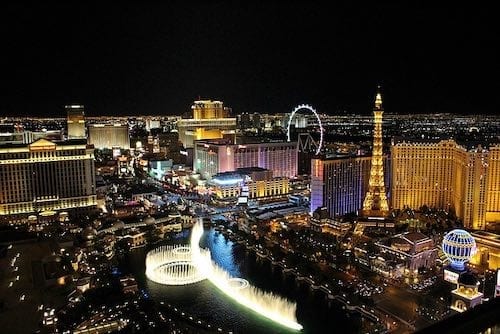 The Investing News Network had the opportunity to visit facilities and dispensaries in the thriving Las Vegas cannabis scene.

The Investing News Network (INN) had the opportunity to tour the vibrant Las Vegas cannabis market last Thursday (November 15) through visits to a production facility and a dispensary.

Nevada legalized adult-use cannabis in 2017, which has led to the burst of a new scene with tourism cannabis consumption booming. Several operators have also set up shop across the state.

According to a projection from Statista, Nevada will reach US$433 million in sales value for the marijuana market in 2019, with that figure increasing to US$587 million by 2020.

In a research note to investors Neal Gilmer, analyst with Haywood Securities, wrote adult-use sales had exceeded initial expectations reaching US$424.9 million in the first year of sales.

“This strong start to the program in Nevada suggests that the market is well positioned to continue to capture market share from the residents and more importantly for operators, the tourists,” Gilmer said.

The tour, organized by Grit Capital and KCSA Strategic Communications, took a select group of investors across a scenic route of the current landscape in the Las Vegas marijuana market.

The first stop was the GreenMart NV production facility from MPX Bioceuticals (CSE:MPX).

MPX is currently undergoing a merger of sorts with iAnthus Capital Holdings (CSE:IAN), in which iAnthus will obtain all the US assets from MPX.

The facility is predominantly focussed on recreational products due to a new found interest in MPX’s dried flower.

As told to the groups, the facility will be expanded sometime soon basically replicating the existing production cycle. This process would likely take a year once approved.

The facility consists of different growing rooms in which the plants are cycled through.

MPX is also working with novel products such as candy infused with cannabis elements and other extracts.

On the way to the next stop, investors were treated to a presentation from High Hampton Holdings’ (CSE:HC) director and interim CEO Christian Scovenna.

As part of Scovenna’s pitch presentation, the executive announced the new full time CEO for the company. Gary Latham, who previously spent time with Mojave Jane in California, will step up as the new leading executive.

Investors were then taken to “The Source,” a dispensary from Green Growth Brands (CSE:GGB), previously known as Xanthic Biopharma, located in the western area of Las Vegas.

Peter Horvath, CEO of GGB, told the investor audience he wants his retail experience not to compete with those of existing cannabis retailers in the US.

The executive broke down the idea of not reaching for nationally-known brands due to, according to him, the dislike from millennials for these brands.

Instead, Horvath said he wants city-specific diversified emotion-driven brands that appeal to consumers in each market.

GTI and MedMen have both added to the rush of multi-state operators of cannabis assets in the US market raising capital in Canada.

Julia Fulton, investor relations officer for GGB, told INN the company’s expansion plans for retail aren’t locked to just the US; she said there’s a possibility for the company to apply for a license in the upcoming Ontario market.

The provincial government of Ontario will open a free retail market in April of 2019 in which licensed producers (LPs) will be restricted to one store.

The last stop of the tour for investors was a quick look at a distribution facility from KushCo Holdings (OTCQB:KSHB), a cannabis packaging, supply and accessory operator aiding the US industry.

Nick Kovacevich, CEO of KushCo, greeted investors into its Las Vegas offices but explained the actual eye candy of a facility was in the company’s California operations.

When discussing the company, Kovacevich explained KushCo is excited about a new venture with the sale of [particular] gas tanks designed for processing and extraction.

The executive was forward with the investor group and said the company’s biggest challenges moving forward is making sure to meet the demand of clients’ requests in terms of packaging.

Before the end of the tour, and as the last stop David Rendimonti, president and CEO of LiveWell Canada (TSXV:LVWL), gave a talk on the importance and potential for the cannabidiol (CBD) hemp market.

LiveWell plans to position itself at the center of the nascent subsector of the cannabis industry: health and wellness products.

The company, which debuted on the TSX Venture Exchange (TSXV) in June, reported C$20.1 million raised as of June 30.

“Over the next 12 months, LiveWell will continue to make waves as we develop and prepare our suite of products, in addition to delivering wholesale CBD to the market,” Rendimonti said.

Editorial Disclosure: High Hampton Holdings and Xanthic Biopharma are clients of the Investing News Network. This article is not paid-for content.