Shares of Aurora Cannabis (TSX:ACB) rallied on Monday (September 17) after a report indicated the company was the target partner for The Coca-Cola Company (NYSE:KO) for the development of wellness beverages infused with CBD.

The report from BNN Bloomberg indicated the partnership between Aurora and the beverage giant would seek to develop “beverages that will ease inflammation, pain and cramping.”

Unnamed sources said in the report the deal was “pretty advanced down the path” and would target the wellness market.

Stocks for Aurora closed Monday’s trading session with a whopping 16.86 percent increase in value from its previous closing price. ACB finished with a price per share of C$9.98. 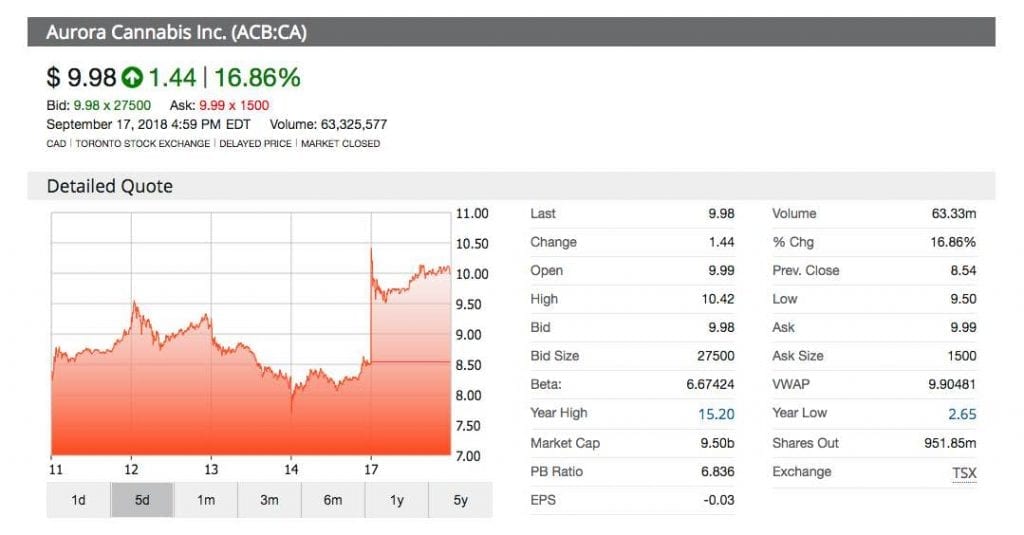 During after hours trading, shares of the beverage company were up 0.32 percent on top of its closing price.

The massive beverage company behind popular sodas like Coke, Sprite and Dasani water counts with a US$197 billion market cap.

According to the report, representatives from Coca-Cola also met with Aphria (TSX:APH). However, conversations with the licensed producer (LP) didn’t advance much after.

After speculation ran rampant on Monday, Coca-Cola issued a statement in an attempt to clarify the rumors.

“We have no interest in marijuana or cannabis. Along with many others in the beverage industry, we are closely watching the growth of non-psychoactive CBD as an ingredient in functional wellness beverages around the world. The space is evolving quickly. No decisions have been made at this time.”

If confirmed, the move by Coca-Cola would continue a trend of established beverage companies seeking or obtaining entries into the emerging cannabis space.

Most recently, rumors circled of alcohol producer Diageo (NYSE:DEO) seeking some form of partnership with one of the Canadian licensed producers.

Doug Waterson, CFO and portfolio manager with Faircourt Asset Management and manager of the Ninepoint UIT Alternative Health Fund told the Investing News Network (INN) a majority of the rally for Tilray was due to its leading position as the company set to win the partnership with Diageo.

In August, that relationship showed its evolution as Constellation Brands re-upped in Canopy supplying the producer with a C$5 billion investment to help the company expand international opportunities.

“Over the past year, we’ve come to better understand the cannabis market, the tremendous growth opportunity it presents, and Canopy’s market-leading capabilities in this space,” Rob Sands, CEO of Constellation Brands said.

The partnership between these two is also set to develop cannabis infused beverages.

Charles Taerk, president and CEO of Faircourt Asset Management, told INN the move from Constellation brought legitimacy to the cannabis space and made him ask himself which company was next for a partnership.

“[There is a] list of companies that we feel are well positioned, have capacity and don’t have a dance partner, so it’s potential,” Taerk said.

The other alcohol company to enter the cannabis space was Molson Coors Brewing (NYSE:TAP,TSX:TPX). The company formed a joint venture with cannabis Quebec-based LP HEXO (TSX:HEXO), formerly known as The Hydropothecary Corporation.

The new entity will also seek to develop non-alcoholic beverages infused with cannabis.

The entry from another beverage company into the cannabis space would only help to improve the legitimation process the industry has embarked on this year as legalization is weeks away in Canada.

Pressure for beverage companies to diversify and find new revenue streams has also been at the centre of these moves into the cannabis space.

Don’t forget to follow us @INN_Cannabis for real-time news updates and stay tuned for cannabis stories from the MoneyShow!

Ayurcann Holdings Corp. (CSE: AYUR) (the “Company” or “Ayurcann”) an integrated Canadian extraction company specializing in the processing of cannabis and hemp for the production of oils and various derivative products, announces the granting of stock options and restricted share units.

The Company has announced that it has granted incentive stock options to directors, officers, employees and consultants of the Company to purchase an aggregate of 1,000,100 common shares under the Company’s Stock Option Plan. Each option is exercisable at a price of $0.16 per common share, expires three years from the date of grant and vest six months from the date of the grant.

A planned business merger between two leading cannabis producers hit a small delay this week as a critical vote got moved.

Partnerships with Minardi Law , Minorities for Medical Marijuana, CultivatED, and the Georgia Justice Project will include clinics and virtual events across Florida , Georgia , and Massachusetts

Trulieve Cannabis Corp. (CSE: TRUL) (OTCQX: TCNNF) (“Trulieve” or “the Company”), a leading and top-performing cannabis company based in the United States announced today a series of expungment clinics located throughout south and central Florida as well as virtual events in Georgia and Massachusetts . The clinics are part of the Company’s celebration of the 50 th anniversary of 420.

The Apothecarium is offering cannabis from Houseplant, the cannabis lifestyle brand founded by Seth Rogen and Evan Goldberg at its five California dispensaries. The Apothecarium has three San Francisco locations (Castro, SOMA and Marina ) and one each in Berkeley and Capitola (outside of Santa Cruz ).