Cannabis stocks shot up on Monday (August 27) after reports that a massive alcohol producer may enter the space.

Diageo (NYSE:DEO), the alcohol maker behind Guinness beer and Crown Royal Canadian whisky, is eyeing an entry into the booming cannabis market, following in the footsteps of a number of other alcohol companies, a report from BNN Bloomberg says.

Unnamed sources laid out in the report suggest two timeframes for the Diageo move. Some say the company is moving through a long deliberation process that may prove unfruitful in the end. But others have said conversations are moving quickly and that a deal with a Canadian producer is close.

There are two public Canadian cannabis producers with ties in their executive ranks to the alcohol company: Aphria (TSX:APH) and Maricann Group (CSE:MARI).

Aphria’s first-ever chief commercial officer, Jakob Ripshtein, appointed in April, served as a CFO at Diageo Canada. According to his LinkedIn page, he spent eight years with the company.

Another current cannabis executive with a past at the alcohol company is Geoff Kosar, chief marketing officer for Maricann, who was appointed to the cannabis firm in February. Kosar served as marketing director and head of marketing in Canada during his tenure at Diageo, which lasted over eight years.

At the center of all the rumors is Diageo, whose share price rose a marginal 0.35 percent and finished Monday’s trading session at US$141.97.

Maricann, the other cannabis company with public ties to Diageo, also rose during trading on Friday and Monday, albeit in smaller increments than Aphria. Shares for the CSE-listed producer rose 1.08 percent, reaching a price point of C$1.88 on Monday.

The market’s public favorites on Monday, however, were Cronos Group (TSX:CRON,NASDAQ:CRON) and Tilray (NASDAQ:TLRY), with both increasing over 20 percent. 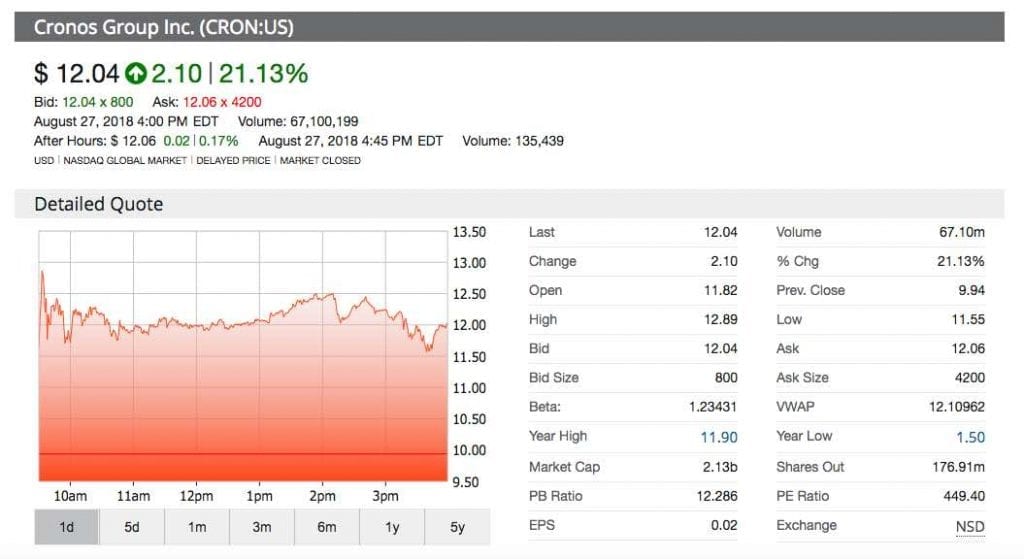 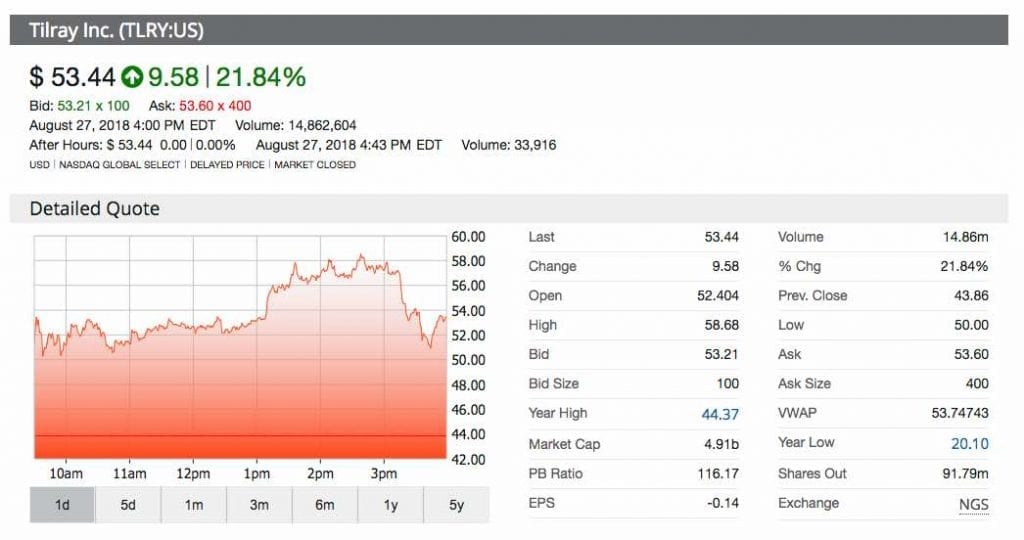 Reports have indicated that alcohol sales are lower in legal cannabis territories. As such, analysts have speculated on when alcohol producers will make a claim for cannabis companies. Other established industries, like tobacco and pharmaceuticals, have also been pointed to as potential players in the space.

Last year, Constellation Brands (NYSE:STZ) made the first move and invested C$245 million into Canopy Growth (TSX:WEED,NYSE:CGC). On August 15, the alcohol company, which produces Corona beer, announced another investment into the cannabis giant.

“We view this investment in our business as an endorsement of our execution since forming our initial strategic relationship in October 2017,” Bruce Linton, co-CEO of Canopy Growth, said following the C$5-billion investment into his company.

The investment from Constellation also sent cannabis stocks off to the races and was described by Charles Taerk, president and CEO of Faircourt Asset Management, as a “shot in the arm” for the industry.

“It legitimizes the Canadian businesses and it legitimizes global recreational and medical opportunities and then you ask the question ‘ok who’s next?’ … that is really a list of companies that we feel are well positioned, have capacity and don’t have a dance partner, so it’s potential,” Taerk said.

Molson Coors Brewing (TSX:TPX.B,NYSE:TAP) also made a play for the public cannabis space by forming a joint venture with the Hydropothecary Corporation (TSX:HEXO) in early August.

The two companies will oversee the standalone company, which is set to work on the production of non-alcoholic beverages infused with cannabis.

As investors brace for the impact a potential entry from Diageo would cause in the public cannabis space, rumors have started on which company will be the winner of a deal with the alcohol giant.

Based on its previous involvement with Constellation, Deepak Anand, vice president of Cannabis Compliance, said in an interview that he thinks it’s safe to rule Canopy out of this conversation.

It will be key for investors to follow if the new deal from Diageo comes soon, and if it will lift the entire sector like the Constellation investment did.

Editorial Disclosure: Maricann Group is a client of the Investing News Network. This article is not paid-for content.

PacRoots is Pleased to Announce Profitable First Project with an ROI of 200% and Yield of 105,000 lbs of Hemp CBD