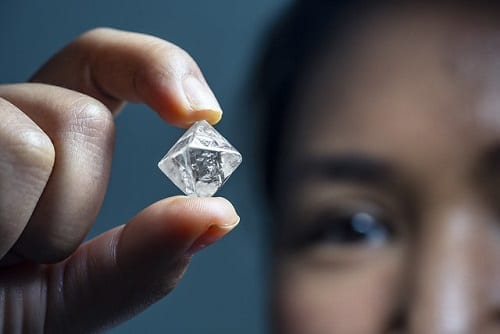 The 28.84 carat white diamond was recovered in March from the East Kimberley mine, which has been in operation since 1983.

Mining major Rio Tinto (ASX:RIO,LSE:RIO,NYSE:RIO) has unveiled the largest white gem-quality diamond ever recovered from the famed Argyle mine in Western Australia.

The 28.84 carat white diamond was recovered in March from the East Kimberley mine, which has been in operation since 1983.

The rare find has been dubbed Argyle Octavia, paying homage to its unique beautiful octahedral shape.

The Argyle mine is world renowned for its extremely exceptional and brightly hued colored diamonds, particularly its pink- and red-toned stones.

“We are delighted with this discovery, which is a testament to the extraordinary Argyle orebody that continues to deliver these miracles of nature, even as it nears the end of mine life,” Arnaud Soirat, chief executive of Rio Tinto’s diamond and copper portfolio, said in the announcement.

While large, colored recoveries are nothing new for the Western Australian mine, finding such a high-quality white gem is uncommon. In fact, large white diamonds weighing 20 carats or more make up 0.00007 percent of all mine production for Argyle.

“Argyle Octavia is unique in its size, shape and beautiful provenance and will take its place in Argyle’s history as one of a few special large white diamonds ever to be produced from the mine,” said Andrew Wilson, general manager of Argyle Diamonds.

Rio expects to sell the Argyle Octavia in Antwerp at a tender to be held later this year.

This latest discovery is just the most recent of many over Argyle’s 36 years of mining operation. The Australian site is the only significant global source of pink and red diamonds, producing as much as 90 percent of global supply.

In October 2018, Rio brought the Argyle Muse to auction; the 2.28 carat oval-shaped purplish red diamond was the largest of its kind ever sold at tender. The gem sold for an undisclosed amount to an anonymous bidder.

After more than three decades of operation, the Argyle mine is set to close in 2020, which will likely drive up the price of colored diamonds, especially pink and red ones.