Tempus Resources Ltd is pleased to announce assay results from the three remaining diamond drill-holes from the assay batch submitted to the SGS Canada Inc. lab in June, incorporating the first four holes drilled in the 2021 drilling program at Elizabeth Gold Project in Southern BC, Canada. Assays from the other hole of the batch, EZ-21-04 were reported on 10 August, including ‘bonanza’ grades HIGHLIGHTS Second …

Tempus Resources Ltd (” Tempus ” or the ” Company “) (ASX:TMR)(TSX.V:TMRR)(OTCQB:TMRFF) is pleased to announce assay results from the three remaining diamond drill-holes (EZ-21-01, EZ-21-02 and EZ-21-03) from the assay batch submitted to the SGS Canada Inc. lab in June, incorporating the first four holes drilled in the 2021 drilling program at Elizabeth Gold Project in Southern BC, Canada. Assays from the other hole of the batch, EZ-21-04 were reported on 10 August, including ‘bonanza’ grades

Tempus President and CEO, Jason Bahnsen, commented “Exploration drilling at Elizabeth is generating outstanding results. Out of the 15 drill-holes completed in 2021 to date, all have hit vein structures with intersections ranging from half a metre to over six metres in thickness, including all down-plunge and strike extensional holes. Assays for the first four holes are showing high grades of up to 70g/t gold and excellent continuity to the vein structure at depth and along strike in both directions. With these results, Tempus is on-track to prepare a ‘maiden’ modern NI43-101/JORC Mineral Resource estimate for the Elizabeth by year end.”

The first four holes drilled by Tempus in 2021 including the three being reported today were aimed to demonstrate grade and width continuity within the relatively shallow upper part of the northern ore-shoot of the SW Vein. Those holes were hugely successful. The three being reported today all report high-grade significant intersections, with one of the holes also including a ‘bonanza’ grade sub-section.

Significant mineralised intersections from the three drill-holes being reported in this announcement include:

Current exploration drilling for the Elizabeth Gold Project is largely focused the SW Vein, which hosted approximately 70% of the historic inferred resource of 206,139 ounces of gold (522,843 tonnes at 12.26g/t gold – SRK 2009). The holes drilled to date have been designed to address two aims: (i) confirm and upgrade the geological confidence of zones included in the historical resource; and (ii) extend the known mineralisation along strike and down plunge. The first batch of four 2021 holes address the first aim well. However, the majority of 2020-2021 drill holes address the second aim.

The current status of the 15 completed drill-holes in 2021 is that four have now been reported (including three in this release), two additional batches combining 10 holes are at the lab (four sent in July and six last week) and the 15 th hole is currently being logged with samples to be included in a subsequent batch for the lab.

Recently completed drill-holes EZ-21-05, EZ-21-06, EZ-21-07, EZ-21-09, EZ-21-10, EZ-21-11, EZ-21-12, EZ-21-14; and EZ-21-15 were planned to extend mineralisation beyond the zone covered by the historic resource down plunge and along strike. Where drilling is planned at approximately 50-metre centers along strike, and below the northern and southern mineralised chutes. The program will also include a series of upcoming holes that step down plunge another 50 metres. Importantly, every one of these drill-holes has so far intersected the SW Vein structure, with quartz vein intersections ranging from half a metre up to four metres . Tempus’ exploration team is impressed with the consistency shown by this.

Given the apparent success of the Phase 1 program to date at Elizabeth and the exciting results from the recent tenement-wide geophysical surveys ( see Tempus’ ASX release of 2 August 2021 ), Tempus has appointed respected Canadian mining contractor and EPCM company, JDS Energy & Mining Inc. (“ JDS “) to assist prepare a plan to re-open the Lower Portal at Elizabeth (see Figure 3 below), extend the existing drift by approximately 100 metres and then add an approximately 300 metre cross-cut drift at the end, running parallel to the SW Vein to facilitate drilling from underground. Once complete, the plan will be submitted to regulators for their approval. Drilling from underground will increase efficiency of drilling the down-plunge extension of the SW Vein but also greatly ease winter drilling plans.

The Elizabeth Gold Project is the flagship project for Tempus and is located in the Bralorne – Pioneer Gold District of southern British Columbia. The 115km 2 project is a relatively underexplored high-grade mesothermal gold project with mineralisation presenting itself in vein sets which range in true width from 1 m to 6.5 metres. The high-grade quartz veins encountered in the drilling at Elizabeth show close geological similarities to the Bralorne-Pioneer mesothermal vein system (approximately 30km away), which was mined to a depth of approximately 2,000 metres and produced more than 4 million ounces of gold over a period of more than 70 years (from approximately 1900 to 1971). 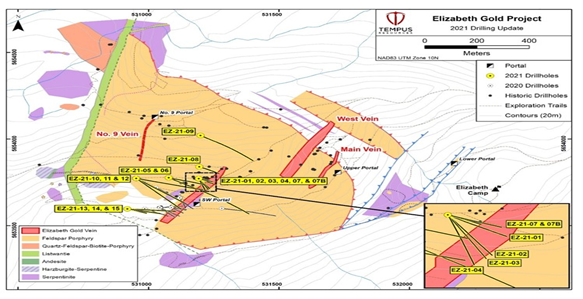 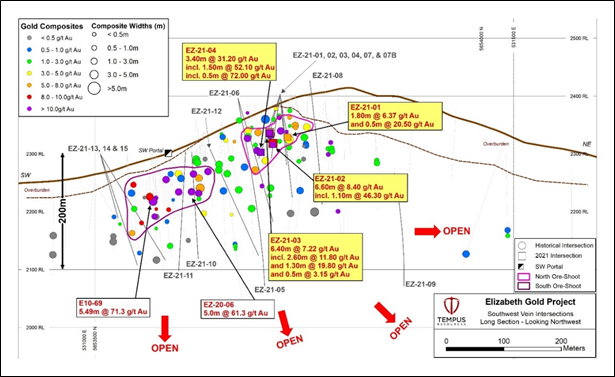 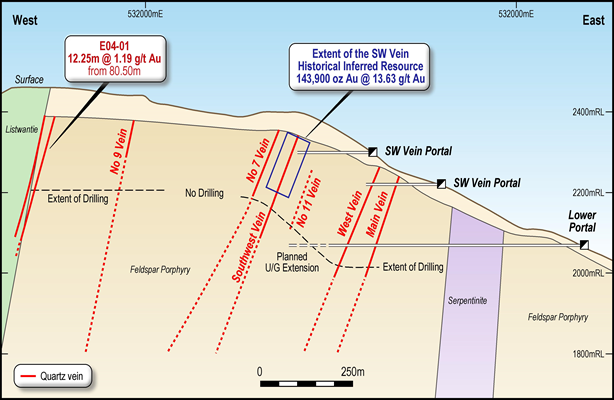 Information in this report relating to Exploration Results is based on information reviewed by Mr. Kevin Piepgrass, who is a Member of the Association of Professional Engineers and Geoscientists of the province of BC (APEGBC), which is a recognised Professional Organisation (RPO), and an employee of Tempus Resources. Mr. Piepgrass has sufficient experience which is relevant to the style of mineralisation and type of deposit under consideration and to the activity which he is undertaking to qualify as a Competent Person as defined by the 2012 Edition of the Australasian Code for reporting of Exploration Results, Mineral Resources and Ore Reserves, and as a Qualified Person for the purposes of NI43-101. Mr. Piepgrass consents to the inclusion of the data in the form and context in which it appears.

Tempus Resources Ltd (“Tempus”) is a growth orientated gold exploration company listed on ASX (“TMR”) and TSX.V (“TMRR”) and OTCQB (“TMRFF”) stock exchanges. Tempus is actively exploring projects located in Canada and Ecuador. The flagship project for Tempus is the Blackdome-Elizabeth Project, a high grade gold past producing project located in Southern British Columbia. Tempus is currently midway through a drill program at Blackdome-Elizabeth that will form the basis of an updated NI43-101/JORC resource estimate. The second key group of projects for Tempus are the Rio Zarza and Valle del Tigre projects located in south east Ecuador. The Rio Zarza project is located adjacent to Lundin Gold’s Fruta del Norte project. The Valle del Tigre project is currently subject to a sampling program to develop anomalies identified through geophysical work.

*true thickness is estimated using a multiplier of 0.85.

Appendix 2: The following tables are provided to ensure compliance with the JORC Code (2012) requirements for the

reporting of Exploration Results for the Blackdome-Elizabeth Gold Project

Section 1: Sampling Techniques and Data
(Criteria in this section apply to all succeeding sections.)

Section 2: Reporting of Exploration Results
(Criteria listed in the preceding section also apply to this section.)