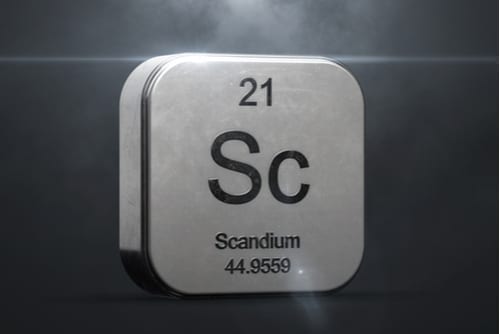 Although scarce supplies have hindered widespread adoption in the past, discoveries of new, high-grade resource sites could usher in a potential scandium boom.

New scandium supply has the potential to completely change the industrial sector with alloys that are lighter, stronger and more temperature resistant than what’s currently on the market.

While precious metals such as palladium and platinum have captured the market’s attention recently, rare technology metals like scandium are beginning to show signs of significant growth potential.

Despite scandium’s obscurity, the element is not particularly rare on our planet’s surface. In fact, scandium is more abundant than other precious metals like mercury and lead, and is valued by industries that need lightweight, high-strength and temperature-resistant alloys. While there is strong demand for the rare metal, widespread adoption of scandium has been hampered by a dysfunctional supply chain. As new technologies empower companies to discover new sources for scandium, the element could be widely adopted by major industries in the years to come.

The automotive industry could become an early adopter of scandium-modified aluminum alloys as manufacturers seek to address key material issues presented by the use of current high-strength aluminum products and composite materials. The weight reduction of electric vehicles (EVs) and combustion engine cars and trucks to extend battery range and improve fuel efficiency, respectively, is one major use for scandium; however, there are other attributes of the material that have been ignored due to the focus of significantly reducing emissions.

The history of scandium is relatively short, with the metal initially being discovered and used by the Soviet Union in aircraft and weapons manufacturing in the 1970s. The commercial use of the rare metal began in the 1990s when an American company, Ashurst Technology, partnered with a Ukrainian mining firm to harvest scandium from a historic iron–uranium mine in Ukraine.

It was quickly discovered that scandium-aluminum alloys are superior to conventional alloys in a variety of industrial metrics. One study done by ECK Industries shows that scandium-aluminum casting alloys are more resistant to erosion in high-temperature environments, as well as being lighter and stronger. Scandium was quickly adopted in the manufacturing of golf clubs, ski poles and handgun frames.

More recently, scandium has started to be used as an electrolyte material in solid oxide fuel cells, an area that could drive future demand. For automotive applications, Formula 1, which is regarded as the pinnacle of motorsport, has been using aluminum and scandium in key components where composite materials have repeatedly been failing and affecting reliability.

Scandium also happens to be one of the most highly valued elements on the periodic table. Depending on the purity level, scandium oxide can be appraised at around US$2,000 to US$4,000 per kilogram. This is mainly due to the extremely limited supplies of commercially viable scandium, which has a low affinity for other minerals.

This means that scandium rarely concentrates at higher levels alongside other metals, with trace quantities produced as a by-product of uranium, tungsten and nickel ore processing. While scandium isn’t rare in and of itself, commercially viable deposits of scandium (greater than 200 to 300 grams per tonne) are rare. On the chance that a high-grade source is identified, most of these scandium sources can’t produce large quantities of the metal. All of this means that the global market for scandium is quite small, ranging between 5 to 15 tonnes of supply annually, with the main producers of the rare metal located in Russia, Ukraine and China.

Due to the small scandium market, the US Department of Commerce and the International Trade Commission do not have any specific data for scandium trading, since there are no formal exchanges or futures markets for buyers and sellers to trade. The rare metal is mostly exchanged between private parties with little information going out to the public, making it incredibly difficult to estimate global markets and prices obtained on scandium sales.

Whatever the reason for the current state of scandium supply, there are two important sides to the scandium story. Firstly, from a material engineering perspective, scandium has been recognized as an ideal agent for alloys. Most current research regarding scandium is conducted with small and specific technological needs in mind due to tight product availability.

There are a variety of industries that could rapidly adopt scandium over the next few years should supplies stabilize and prices decrease. Scandium-modified aluminum alloys are stronger, lighter and more heat tolerant than aluminum-only alloys. Even if only a tiny percent of the annual aluminum market (such as 0.1 percent) began to include scandium in aluminum alloys in a 200 to 1 ratio, the surge in demand would see the global market reach 350 tonnes annually, an increase 25 to 70 times greater than today’s global market. The primary aluminum market is one of the largest metals markets globally after steel, and it is continuing to grow year-on-year in primary and specialist product applications.

Recent data from Nemak, one of the world’s largest automotive original equipment manufacturers, shows that high-strength aluminum components are an US$11 billion target market for the company by 2025. The average high-strength aluminum content in current passenger vehicle platforms, regardless of combustion engine or electrification drivetrain, is as little as 75 kilograms and is greater in premium segment autos and SUVs by as much as three times.

Estimates show that as much as 0.17 kilograms of scandium could be required for high-strength and high-temperature applications in new EVs. With Bloomberg projecting EV sales to reach 28 million by 2030, this industrial growth could equate to annual demand of 5,100 tonnes of Sc2O3 for this platform alone.

The aerospace industry is another sector that could adopt scandium-aluminum alloys in the future. Around 1,200 airplanes are built every year, weighing on average 75,000 kilograms with approximately 50,000 kilograms of that coming from aluminum. Building bigger, faster, and lighter aircraft is something that airlines and manufacturers are constantly pushing towards.

One way airplane manufacturers can achieve this is by substituting scandium-aluminum alloy panels instead of conventional aluminum panels. Every kilogram taken off an airplane’s weight can save thousands of liters and millions of dollars of fuel over the lifetime of the airplane, a financial incentive that is greatly beneficial from an environmental standpoint. More recently, scandium and aluminum use in auto chassis, running parts, spot welding material and in aluminum alloy powders for laser-melt 3D metal printing show an ever-expanding consumption dynamic for the material.

According to Imperial Mining Group (TSXV:IPG) CEO Peter Cashin, the main factor preventing scandium’s widespread adoption is the lack of consistent, reliable supply. “The largest impediment to broader scandium use has been the strict limitation on availability of a reliable scandium supply for manufacturers of electric and combustion automobiles, next-generation commercial aircraft, marine platforms and the military. Our discussions with large industry players have shown us just how extensive the scandium market could become once a long-term, sustainable supply becomes available for the aluminum alloys industry,” said Cashin during an Investing News Network interview.

Leaders in the scandium market

While there aren’t many companies operating in the scandium space, a number of industry leaders are beginning to stand out. Scandium International Mining (TSE:SCY) is an Australia-focused company looking to identify potential scandium reserves. Its main project is the Nyngan scandium project in Australia, which is the largest scandium-only site in the world.

Imperial Mining Group is another company with significant interest in the scandium space, especially in Canada. Imperial Mining’s main assets are located on the Crater Lake scandium property in Quebec. The company recently completed a 1,100 meter drill program towards identifying a high-grade scandium resource worthy of establishing a 41-101 inferred resource calculation. Results from the drilling are expected soon. Based on previous drill results, Imperial believes it has the only high-grade scandium site on the entire continent, an asset that could give the company a significant advantage over the competition.

Despite its niche status, scandium has tremendous potential for mainstream adoption within various sectors. Scandium’s ability to strengthen and lighten alloys is a major benefit to industrial players, which could help bolster demand in the future. While limited supplies of scandium have previously prevented mass adoption, the discovery of new, high-grade resources could help establish an expansive, stable market for this critical commodity moving forward.