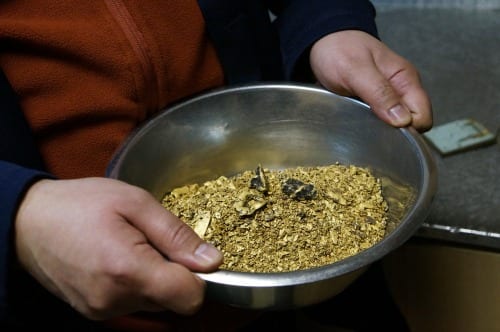 More than 100 years after the first Canadian gold rush, placer gold remains associated with the gold rushes of the late 19th century.

That classic image of an old-time prospector knee-deep in a mountain stream panning for gold may no longer accurately portray what gold mining looks like, but the legacy is clear in some of the modern era’s greatest discoveries. In the 21st century, mining exploration has returned to the sites of the Klondike and other historic gold rushes using cutting edge technology and exploration techniques to locate the sources of the riverbed gold that brought hopeful prospects to the Canadian Klondike.

Modern exploration techniques have worked wonders in Yukon and British Columbia, and now they are being put to work in Quebec. By tracing the placer gold deposits of the Beauce gold rush, modern miners are hoping to find hard rock deposits that dwarf anything those 19th-century prospectors could possibly have imagined.

Placer gold and the motherlode

A placer deposit is the accumulation of valuable minerals that has been separated from a larger source deposit by weathering and gravity. Much of this material tends to get washed away by running water, collecting in either active riverbeds or buried at the sites of ancient rivers. The mineralization found in placer deposits has to come from somewhere, and in many cases, the original hard rock deposits that created historical gold rush placers have never been found.

Today, the mining exploration industry has tools that were not available one hundred years ago. For example, prospector Shawn Ryan sparked a modern gold rush in 2011 through the use of his signature “Drones to Drills” program that drastically cut down the amount of labour required. Ryan’s company, White Gold (TSXV:WGO, is currently in pursuit of placer gold deposits identified in Yukon territory thanks to his innovative techniques. Similar exploration programs are being enabled by drones across the mining industry. BTU Metals (TSXV:BTU) recently announced it had commissioned a drone-based exploration program to survey over 827 line kilometers at its Red Lake, Ontario property.

The original Klondike and Cariboo gold rushes had lasting impacts on their regions, laying the foundations for the modern mining industry in Yukon and BC. By 1980, the Klondike rush had brought in tens of thousands of prospectors who collectively found about $29 million (present value) worth of placer gold. Northern BC saw a succession of small, impactful gold rushes in the Golden Triangle and Cariboo regions beginning in 1861. All of these rushes were based on riverbed placer gold with thousands of people coming from all over North America to these alluvial deposits. The locations of these historic deposits are well documented and today they could serve as maps to far greater value.

More than one hundred years later, Western Canada is seeing a modern gold mining surge, with much of the attention focused on the sources of the historic gold rush placer. Modern explorers are now seeing success locating previously untapped hard rock in Western Canada. Since 2001 when Shawn Ryan discovered the White Gold deposit within the Yukon portion of the Tintina Gold Belt, the region has once again become a hotbed for mining activity. Major gold companies like Kinross Gold (TSX:K, NYSE:KGC) and Agnico Eagle Mines Limited (TSX:AEM, NYSE:AEM) and Goldcorp have all made large acquisitions in the region in recent years. Similarly, BC’s Golden Triangle mining district has once again become a hotbed of activity.

While the most famous historical gold rushes took place in the west, eastern Canada has seen its share of placer gold as well. Located in southern Quebec, the Beauce mining district was the site of Canada’s very first gold rush back in 1860 and is home to the largest placer gold deposit in the eastern half of the continent.

Despite seeing numerous instances of placer gold mining through the years, the Beauce district remains largely underexplored using modern techniques. To date, the hard rock deposits that have been the source of some of the most abundant placer gold deposits have yet to be discovered. Modern exploration methods using historical placer deposits as a guide could enable explorers to discover new resources in the region.

Beauce Gold Fields (TSXV:BGF) sees the potential in the Beauce district for yet another modern-day Canadian gold rush. The company owns the 152 claims Beauce Gold Fields project which comprises 176 acres of real-estate and numerous historic gold producing placer mines. Currently, the company is focused on tracing historic placer gold in the region back to its original hard rock source. The company is the first to conduct this type of exploration on the potentially highly underrated gold district.W

“The start of exploration work on our property is an important milestone for our company. In fact, this work will enable us to correlate the many various geophysical anomalies and to identify potentially mineralized zones that could possibly lead to a hard rock source of the gold contained in the placers of St-Simon-les-Mines,” said Patrick Levasseur, President and CEO of Beauce Gold Fields.

Just as companies have found new value in storied gold districts in BC and the Yukon, so too are explorers now seeing potential in the historic Beauce District. By using historic placer gold as a starting point for modern exploration methods, explorers in southern Quebec are attempting to find source deposits in order to spark a modern day gold rush.