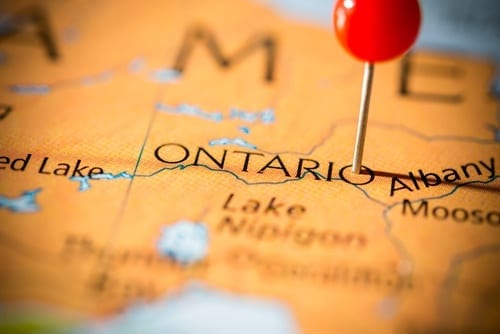 With a fresh wave of resource exploration companies looking to discover and develop new projects, Ontario is likely to play a significant role as a future battery metals supply source.

End users that require battery metals to power new technology for the new era of energy are increasingly looking for secure ethical sources. Looming supply shortages in the face of increasing demand, especially in Western markets, are making stable mining jurisdictions like Ontario, Canada all the more attractive for battery metals exploration.

The world’s biggest automakers, including Ford (NYSE:F), Volkswagen (ETR:VOW3), General Motors (NYSE:GM) and Toyota (NYSE:TM) are planning massive roll outs of EV models in the near future. By 2050, according to Morgan Stanley (NYSE:MS), EVs may account for nearly half of the estimated total 130 million cars to sold globally that year. Compare that to the only 1 percent of total global car sales in 2016 and it should be quite clear that demand for battery metals is set to explode over the coming decades.

Cobalt is one of the battery metals most likely to benefit from the demand of lithium-ion batteries over the next few years. By 2020, 60 percent of lithium-ion battery cathode formulations will include cobalt, according to Citibank. The price of cobalt may be down 27 percent year-to-date on the London Metal Exchange as of mid-December 2018, but there is still a lot of confidence remaining in the market given demand projections amidst rising supply security concerns.

The price of vanadium pentoxide flake, which is used to make VRFBs, has been on a steady climb in 2018 more than doubling from the start of the year to reach record highs by the third quarter. Benchmark Mineral Intelligence Managing Director Simon Moores told the Investing News Network that VRFBs could become the second-leading technology in the battery market following lithium-ion batteries.

Huge concerns over supply of cobalt and vanadium

Growth in the electric vehicle and renewable energy industries in North America not only depends on increasing demand for these technologies but also on securing a stable supply of battery metals like cobalt and vanadium. Supply for both of these metals happens to be largely influenced by market forces outside of North America.

The majority of the world’s global cobalt production comes from the conflict-ridden Democratic Republic of Congo (DRC), which is also home to the world’s largest-known cobalt reserves. The DRC’s chronic corruption and constant political conflicts alongside the government’s recent tax hikes for mining companies and cobalt giant Glencore’s (LSE:GLEN) production setbacks, presents significant supply-side risks for the EV battery industry.

In addition, China — which controls 85 percent of the world’s cobalt refining capacity — sources over 90 percent of its cobalt supply from the DRC, further exposing the global battery market to serious supply disruptions. The country also has the most EVs on the road than any other nation, including the United States. China’s government is pedal-to-the-metal when it comes to replacing fossil-fuel vehicles with electric in an effort to dramatically reduce its air pollution problems. According to a McKinsey report, the Asian nation is home to 43 percent of global EV production and nearly 50 percent of the world’s planned capacity for lithium-ion battery production.

To supply its burgeoning EV industry, China has been stockpiling cobalt as well as securing off-take agreements with cobalt miners. “China is going green and they are going to be the Silicon Valley of electric vehicles. To do that they want to secure the raw materials that ultimately comprise that enterprise,” said Anthony Milewski, Chairman and CEO of Cobalt 27 Capital Corp.

While this is all good for China’s EV auto and battery industry, it spells trouble for the industry in North America and Europe if auto and battery manufacturers there are unable to access much needed cobalt supplies.

China also has a large influence over the vanadium market as well. The country dominates global steel production, making it the world’s largest vanadium producer and vanadium consumer. New government-mandated building code standards requiring vanadium rebar strengthening and increasing pressure from the growing energy storage industry are exacerbated a supply gap that was already sliding into a deficit.

In North America, the only vanadium producer is Energy Fuels (TSX:EFR,NYSEAMERICAN:UUUU) which in the fourth quarter of 2018 restarted production at its Utah-based White Mesa mill.

“Supply scarcity and the resulting price volatility are the two biggest hurdles to vanadium’s potential bright electric future, reports Reuters. “China’s moves both to boost demand and limit supply have created a perfect bull storm for the tiny vanadium market.”

Now that vanadium prices are taking off, resource companies are beginning to explore and advance vanadium projects once again.

One of the most promising jurisdictions for battery metals exploration and development in North America is the mineral-rich and mining-friendly province of Ontario, Canada. Ontario is a historically well-known and stable mining jurisdiction. A number of select resource companies are capitalizing on the province’s unique geology, long history of mining, well-established infrastructure and a large, skilled workforce.

Falcon Gold‘s (TSXV:FG) project portfolio includes cobalt and vanadium properties in Ontario near existing mineral resources and reserves. The company’s Central Canada cobalt-copper–gold project includes the former Central Canada gold mine and straddles 10 kilometers of the Quetico fault zone, which hosts occurrences of banded iron formation containing cobalt- and copper-rich massive sulphide zones in VMS-like lenses. The property is within the historical Atikokan mining camp with a number of nearby significant deposits including Agnico Eagle Mines’ (TSX:AEM) multi-million ounce Hammond Reef project, the Rainy River Gold Mine and Global Energy Metals‘ (TSXV:GEMC,OTCQB:GBLEF,FWB:5GE1) Werner Lake Cobalt project, which hosts 181,000 tonnes of 0.4 percent cobalt. Falcon Gold’s Wabunk Bay cobalt-copper-nickel project is adjacent to the past producing Uchi gold mine within the same greenstone belt as the Red Lake mining camp. Both copper and nickel are also essential metals to the new era in energy and the EV battery market.

Surge Exploration (TSXV:SUR,OTCQB:SURJF,FWB:DJ5C) holds two adjacent cobalt properties in Ontario, Teledyne and Glencore Bucke, located near the historic and past-producing Agaunico cobalt mine which historically produced a total of 4.35 million pounds of cobalt. The Teledyne and Glencore Bucke properties both host historic resources with average grades of 0.45 percent cobalt. Surge is working to bring those resources into NI 43-101 compliance.

Canada Cobalt Works (TSXV:CCW,OTC Pink:CCWOF,FWB:4T9B) has a portfolio of high-grade silver and cobalt properties with historic production in the Greater Cobalt Camp of northern Ontario. Canada Cobalt Works’ flagship project is the wholly-owned Castle Mine Property which has seen a significant amount of historic silver and cobalt production. The company also holds the Beaver and Violet silver-cobalt projects, both past-producers in the Cobalt mining camp near the Timiskaming silver mine.

As the demand for battery metals like cobalt and vanadium accelerates, battery manufacturers are increasingly looking for secure supplies in stable mining jurisdictions. The Canadian province of Ontario, rich in natural resources and steeped in mining tradition, offers an excellent opportunity for exploration companies and investors alike.