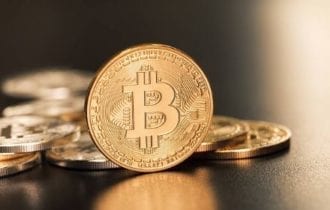 Ever since Bitcoin entered the scene nearly a decade ago, its popularity and method of uses has grown. Is it on the way to becoming a global currency?

It might seem hard to believe that Bitcoin barely existed not even 10 years ago.
In fact, Bitcoin’s first official non-mined transaction happened in January 2009, which was between Hal Finney and Satoshi Nakamoto. A few months later, Kristoffer Koch spent roughly $27 for 5,000 bitcoins worth $0.0001 USD as of June 2009–which were then estimated to be worth $886,000 in 2013.
Bitcoin reached its first peak in November 2013, when it hit $1,000 per coin. Between 2014 and 2016, however, it took a bit of a hit and sat somewhere between $200 and $800.
Now, Bitcoin is worth roughly $1,131.59 USD, and has even begun rivalling the price of gold. Not only that, but the list of how to use the digital currency–or cryptocurrency, that is produced and held electronically–is growing and shows no signs of slowing down.
More and more retailers in Japan, for example, are accepting Bitcoin as a method of payment. Dozens of countries also accept Bitcoin, while big name countries like Microsoft, Dell, and Expedia also take Bitcoin. Putting it simply, it’s safe to say that Bitcoin has made a name for itself over the last several years.
With that in mind, research conducted by Junior Research suggests that Bitcoin users can grow to five million in the next two years. As such, with Bitcoin’s increasing popularity it’s hard not to wonder whether it will become a global currency–and whether a Trump presidency is bitcoin’s answer.

After President Donald Trump’s inauguration in January 2017, it didn’t take much longer for the price of Bitcoin to reach a new high. On March 2, 2017, Bitcoin reached $1,268 per unit–which surpassed even the price of gold–for the first time ever.
As noted by Forbes, the Bitcoin Investment Trust Shares nearly tripled in value over a 12 month period and gained almost 30 percent between December 2016 and March 2017 alone. To get an idea of how much the price of Bitcoin has soared over the last several months, following Trump’s election victory Bitcoin jumped from $708 to $738, and is now $1,131.59 (noted above).
On that note, much like other currencies, Bitcoin reacts to world and political events–particularly in countries where there’s a strong market–such as the US. Similarly, Trump has made it no secret about his preference for a weaker US dollar to help American companies sell goods abroad. This, in turn, has pushed Bitcoin prices up (including gold and silver).

Trump bitcoin currency: will it happen?

While Bitcoin isn’t a government-issued currency, or tied to a specific country, company or bank, advocates are making a strong case to turn to the digital currency as an alternative, especially for those who are hesitant of central banking systems.
With Trump’s presidency having a positive impact (so far) on Bitcoin, experts at Denmark’s Saxo Bank have said that, ” Trump’s plans to increase spending — which would grow the U.S. economy but cause inflation — may prompt people across the world to seek alternative currencies.”
“Emerging market powers eager to move away from being tied to the monetary policy of the US and the banking system as well as to adopt the block chain as a payment system prove willing adherents as they adjust to zero interest rates and the decrease in systematic risk,” the December 2016 report reads.
The report further suggests that if banking systems in Russia and China accept Bitcoin as an alternative to the US dollar, the price of Bitcoin could very well rise above $2,100. With 51 percent of its user based outside the US, and the fact that China is pushing for a new global currency separate from American influence, the possibility of bitcoin as a global currency is more likely than one might think.
Still–there is work to be done before that can happen. At the end of March, the Securities and Exchange Commission denied the Bitcoin ETF application to list on the New York Stock Exchange.
“The Commission believes that, in order to meet this standard, an exchange that lists and trades shares of commodity-trust exchange-traded products (“ETPs”) must, in addition to other applicable requirements, satisfy two requirements that are dispositive in this matter,” the SEC statement reads. “First, the exchange must have surveillance-sharing agreements with significant markets for trading the underlying commodity or derivatives on that commodity. And second, those markets must be regulated.”
Despite this, it’s clear to see how far Bitcoin has come in the last decade, and some suggest it will be the sixth largest currency by 2030.
Moral of the story? Be patient. A Trump presidency just might be the kick bitcoin needs to become a global currency.
Don’t forget to follow us @INN_Technology for real-time news updates.
Securities Disclosure: I, Jocelyn Aspa, hold no direct investment interest in any company mentioned in this article.

3 responses to “Will Bitcoin Become a Currency Under Trump?”