Bitcoin did not have the same record year in 2018 as it did in 2017. Here the Investing News Network looks back on bitcoin trends over 2018.

Let’s face it — 2018 was a catastrophic year for bitcoin.

It seems like another lifetime ago that the top digital currency catapulted to record highs of near US$20,000 in December 2017, causing warranted excitement in addition to speculation on whether or not cryptocurrencies as a whole are “the real thing.”

However, over the course of 2018, the bitcoin price was unable to maintain its 2017 levels, and has steadily decreased over the course of the last 12 months. While its pricing is certainly a major talking point, there are other contributing factors to bitcoin’s ups and downs.

With that in mind, here the Investing News Network (INN) provides a look back to bitcoin’s tumultuous year, with insight from industry analysts on what the year’s biggest bitcoin trends were.

Of all 2018’s bitcoin trends the biggest, of course, was its massive price drop. By the start of the year, bitcoin had tumbled from close to US$20,000, although at US$13,555.70 on January 1 there still wasn’t much cause for concern — at least not yet.

By early February, bitcoin’s price had been nearly cut in half from the start of the year to US$6,661.12 on February 8, according to data from CoinMarketCap.com.

At the time of bitcoin’s early 2018 tumbling, David Mondrus, CEO and founder of Trive, told INN that the early year price drop could have been impacted by Chinese New Year.

Mondrus explained that Chinese New Year is like “Christmas, [the] new year and Thanksgiving all rolled into one.”

By March, bitcoin had climbed up over the US$10,000 threshold once again, although that’s the last time in 2018 it would sustain those levels.

Over the course of the rest of the year, the digital currency favorite tumbled steadily and reached new 2018 lows several times in October and November.

Brian Kelly, founder and CEO of BKCM, told INN the bitcoin cash fork in the middle of November “threw the market off,” and resulted in bitcoin dipping to a 13-month low on November 19 to US$5,101.87. “[The bitcoin cash fork] really … kind of got everybody a little offside,” Kelly said.

Kevin Hobbs, CEO of Vanbex Group, agrees that the fork had an impact on the sector and said that he doesn’t see “much use” for a bitcoin fork at all.

“[The bitcoin fork] did cause [bitcoin] to tumble for awhile,” he explained. “We’ve got a lot of disagreements in bitcoin, but bitcoin is still the strongest, most secure chain on the market.”

November’s bitcoin cash fork split bitcoin cash into bitcoin cash ABC and bitcoin SV, the latter as an homage to bitcoin creator Satoshi Nakamoto. The split caused not only eruption in the market, but also US$3 million in electricity bills and a total loss of US$18 million for bitcoin miners, as per Bitmex Research. 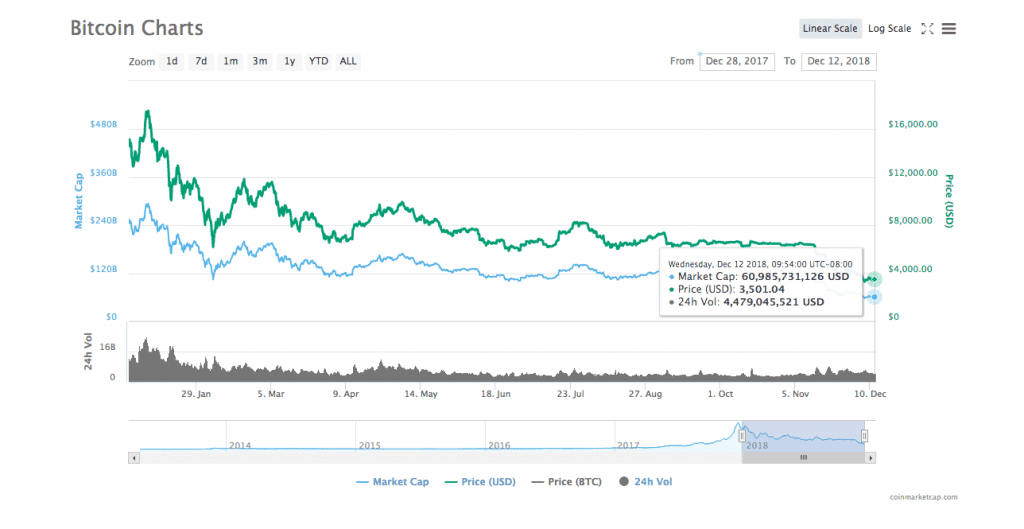 Regulations from various government entities and countries are also always in the mix of bitcoin and cryptocurrency discussions.

Frank Holmes, CEO of US Global Investors (NASDAQ:GROW), told INN that Group of 20 (G20) regulations have been “the biggest challenge” in the last year, and it continues.

Holmes said that the G20’s decision to continually postpone its regulation standards has “slowed down” the exponential growth in the space.

The G20 nations met in July to discuss anti-money laundering standards in relation to cryptocurrency assets and asked that the Financial Action Task Force (FATF) provide clarification on how those standards would apply by October.

The group also met in late November and early December, calling for standards on how to regulate technologies such as cryptocurrencies.

“We will step up efforts to ensure that the potential benefits of technology in the financial sector can be realized while risks are mitigated. We will regulate crypto assets for anti-money laundering and countering the financing of terrorism in line with FATF [Financial Action Task Force] standards and we will consider other responses as needed,” they said.

Meanwhile, the US Securities and Exchange Commission (SEC) has begun providing more clarity on bitcoin and cryptocurrencies. In September, members of US Congress asked SEC Chairman Jay Clayton to provide more certainty for the space.

“It is important that all policy makers work toward developing clearer guidelines between those digital tokens that are securities, and those that are not, through better articulation of SEC policy, and, ultimately, through formal guidance or legislation,” Congress members asked in a letter.

Eric Ervin, CEO of Blockforce Capital, told INN that the SEC providing more clarity has “captured” the minds of a lot of people while scaring the market slightly.

The regulatory agency announced in November that bitcoin and ethereum are commodities and not securities, and fined two cryptocurrency firms for not registering tokens as securities.

“[The SEC] finally gave some clarity on regulations around cryptocurrencies and it wasn’t comforting to a lot of people, who raised assets, which further caused a selloff,” Ervin said.

Similarly, Anthony Di Iorio, CEO and founder of Decentral and Jaxx and co-founder of ethereum, told INN that he thinks clarity from the SEC led to uncertainty “in terms of how companies can proceed.”

“A lot of them are treading a fine line, and that’s just [how] it is on new technologies that come out that are challenging,” he said.

2017 saw a large number of initial coin offerings (ICOs), with over US$3.5 billion raised between 235 ICOs. Most of that came from retail investors, with that trend shifting gears in 2018.

While the number of ICOs was less than it was in 2017, the amount of money raised in ICOs skyrocketed thanks to institutional investors entering the space. According to Autonomous Next, roughly US$9 billion has been raised in ICOs in 2018.

Ervin said that 2018 has seen a “smaller set of deals,” but they have been larger in terms of value and went to institutional investors. He pointed to Telegram, which raised roughly US$1.7 billion earlier in the year.

“[ICOs] were sold primarily to institutional investors and there were a lot fewer deals, and they were all mostly in the beginning of the year,” Ervin said.

Kelly commented that the retail investor, which was dominant at “this time last year,” has become dormant at this point.

“What’s bringing institutions in is that they understand that there’s more to this than just bitcoin,” he said. “There is a new internet and a new capital market being built on a new technology.”

While pricing and regulations remain somewhat concerning, there is still reason for optimism in the space as the new year begins.

Institutional investors dipping their toes in the industry are beginning to give cryptocurrencies legitimacy, and bitcoin exchange-traded funds being approved by the SEC remains a legitimate possibility.

Kelly told INN that the entrance of institutional investors means there will be some “diversification and some dispersion” between cryptocurrencies.

“You might see the top 50 [cryptocurrencies] by market cap trade quite well, where everything might just wilt on the vine,” he said.

Meanwhile, Di Iorio said regulations will continue moving forward, with more clarity coming from regulatory bodies that are expecting companies and projects to “adapt to what they have been creating statements on.”

“[Companies] are going to need to try and balance the technology with the forces … that regulators are putting on [them] to stay within the traditional guideline,” he said.

So hold on tight, bitcoin and cryptocurrency enthusiasts — 2019 will come to show that the space is not just about digital currency pricing, but also about the technology’s impact on our daily lives.

×
See our exclusive index of Bitcoin companies on the move
EXPLORE