Did you miss the first day of this year’s Vancouver Resource Investment Conference? Here are some highlights.

The first day of the 2016 Vancouver Resource Investment Conference (VRIC) just wrapped up, and for the Investing News Network it was a busy one. There was no shortage of industry experts and company CEOs to talk to, and of course there were plenty of presentations and panels to take in as well.
Here’s an overview of some of the day’s highlights. Be sure to follow @INN_Resource and @INN_Editorial for on-the-go updates.
One of the first panels of the day was moderated by Marin Katusa of Katusa Research, and featured Rob McEwen and Colin Sutherland. McEwen is chairman and chief owner of McEwen Mining (TSX:MUX,NYSE:MUX), and Sutherland was recently appointed president of the company. McEwen, perhaps best known for his $5,000 gold prediction, again reiterated his faith in the yellow metal:

Another morning panel was stacked with experts — Frank Holmes, CEO and chief investment officer at US Global Investors (NASDAQ:GROW); Doug Casey, chairman of Casey Research; Ron Thiessen, director and CEO of Hunter Dickinson; and McEwen all participated, with Katusa again moderating. Here are a few thoughts that came up:

Frank Holmes: this will be a “flush out” quarter for major miners #VRIC16 — Resource Investing (@INN_Resource) January 24, 2016

Doug Casey on #resources: “it’s cheap, so I think you ought to be here” #VRIC16

VRIC was busy all through the day, a pleasant surprise for panelists and exhibitors: 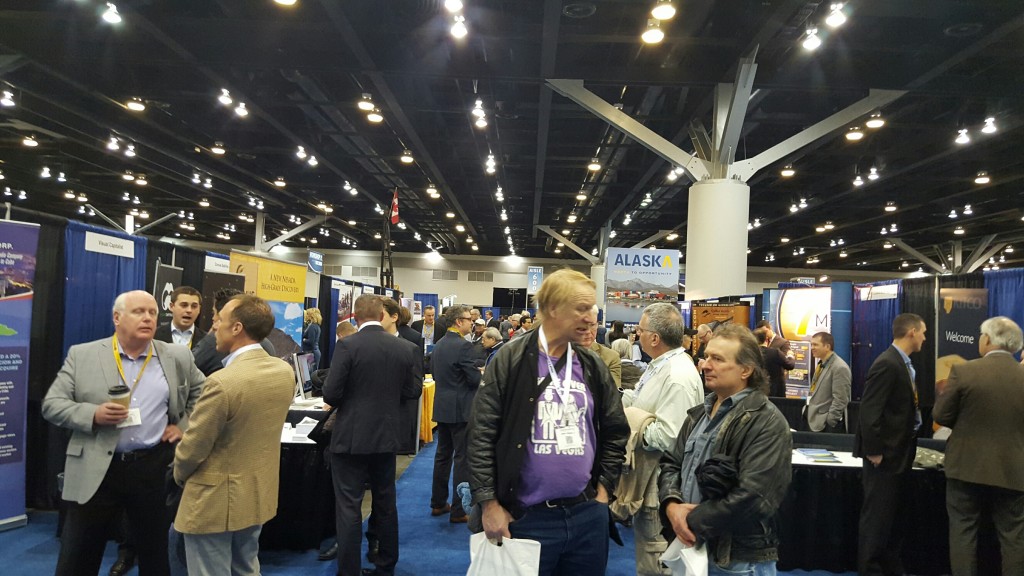 The Yukon Mining Alliance had a strong presence at VRIC, and ran presentations throughout the day at the Yukon Pavilion. One highlight was a talk from Yukon Premier Darrell Pasloski:

Amid all the activity, the Investing News Network was busy conducting video interviews at booth 912. Sunday’s interviewees included: Rick Rule, CEO of Sprott US Holdings; David Morgan, publisher of the Morgan Report; Brent Cook of Exploration Insights; and Bill Bennett, BC’s minister of energy and mines. Interviews will be posted over the next week or so, so stay tuned!

Rick Rule stopped by to speak with @INN_Resource at #VRIC16 – video to be posted next week! pic.twitter.com/YYOJSJzuQQ
— INN Editorial (@INN_Editorial) January 24, 2016

The day wrapped up with another Katusa-moderated panel, this time featuring all of the day’s panelists. Katusa quizzed them on their favorite exploration stocks, getting some interesting results — for instance, John Kaiser of Kaiser Research named Scandium International Mining (TSX:SCY) and Robert Friedland’s Clean TeQ Holdings (ASX:CLQ) as his top two picks, while Thiessen said Kaminak Gold (TSXV:KAM) and Northern Dynasty Minerals (TSX:NDM,NYSEMKT:NAK) are his favorites.
Finally, Katusa surprised attendees by announcing the induction of David Elliott, vice president and director of Haywood Securities, into the Resource Hall of Fame. He’s the second recipient of the honor, with the first being Ross Beaty of Pan American Silver (TSX:PAA,NASDAQ:PAAS) and Alterra Power (TSX:AXY).