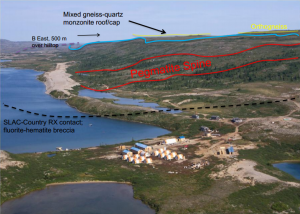 The study estimates the project has a net present value of $2.9 billion before tax, with a 25.6 percent internal rate of return. The mine would cost an estimated $2.57 billion to construct, have a minelife of 30 years, and generate, on average, $1.047 billion in revenue per year.

The prefeas follows up on an announcement from Quest in September that it has produced a heavy rare earth plus yttrium (HREE+Y) concentrate and a separate light rare earth (LREE) concentrate, from the deposit. The HREE+Y has a purity level of approximately 84%, of which 75% is composed of yttrium oxide.

Quest said today that Strange Lake will be one of the world’s largest and highest-grade heavy rare earth (HREE) mining projects and that the planned processing facility will be the largest of its kind in North America.

“We are very pleased with the results of this pre-feasibility study; our consultants have been conservative with the assumptions used and we are satisfied that the returns are very healthy for such a capital-intensive industrial plan,” said Quest President and CEO Peter Cashin. “The Strange Lake project has the potential to provide an important base for establishing a major new North American industrial sector, able to address the chronic HREE+Y supply deficit over a long period of time.”