A proposed Quebec budget is expected to collect on gross royalties from mining, forestry, and water power for $1.2 billion for the current year, with the objective being to generate more than $4 billion in mining royalties over the next decade. 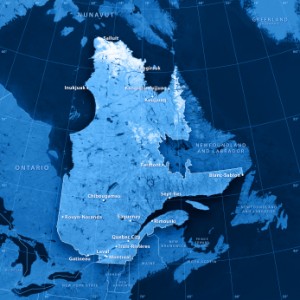 A proposed mining regime in Quebec is poised to collect on gross royalties from mining, forestry, and water power in the amount of $1.2 billion for the current year, with the objective being to generate more than $4 billion in mining royalties over the next decade. The current administration believes it will benefit from the province’s natural resources sector, particularly from the expansion of the mining industry under Quebec’s sweeping northern development plan.

A major focus of the budget is the Plan Nord, a northern development plan aimed at reinvesting $14 billion into Quebec in order to develop and enhance infrastructure over 25 years and create some 20,000 jobs.

The mining industry has supported the Plan Nord, which according to geographer Louis-Edmond Hamelin, is not “a sectoral project, but rather a comprehensive project affecting the whole of Quebec.” The Quebec Mining Association anticipates that the Plan Nord will provide a framework for the development of Northern Quebec, which is twice the size of France and represents 72 percent of Quebec’s land mass. The area has enormous mineral potential and includes benefits that exploration and extraction could generate.

Jean Charest, Quebec’s unpopular premier, is attempting to strike a positive populist tone for voters based on no new tax hikes or user fees in anticipation of the next election, which must be called before the end of 2013. The opposition, Parti Quebecois, has criticized the budget, indicating that provincial royalties from natural resources are not high enough.

Over the last year, the premier has traveled to different corners of the world to promote the sweeping, multibillion-dollar Plan Nord initiative. Charest is planning to travel to Brazil next month, and aims to court potential investors by portraying Quebec as a stable place to invest.

Evaluating political risk as a relative measure is always difficult for investors because broad-ranging policy decisions are a dynamic process. Material changes in taxation or regulation often directly impact the profitability and economic feasibility of resource exploration or mining projects.

In the most recent Survey of Mining Companies from the Fraser Institute, Quebec showed a slight decline to fifth-best place in the world for mining investment. The survey examines the investment climate of 93 jurisdictions around the world, and is based on the opinions of mining executives from 802 mineral exploration and development companies.

Over the last few years, confidence in the province has been marginally shaken by incremental mining tax increases and some concerns about Bill 79. Bill 79 is a review of Quebec’s mining act, and could be seen as a departure from the province’s reputation of stability in governmental policy. However, Quebec has a long-established and enviable track record of favorable regulations and operating conditions for mineral exploration and production.

Quebec is believed to host tremendous resource potential within a vastly unexplored region. In excess of 90 percent of the province’s substratum is made up of Precambrian rock, a geological formation that is known for its deposits of gold, nickel, zinc, and copper.

The budget proposal seems to suggest that Quebec may provide benefits for the companies involved, implying a commitment to strong infrastructural development and direct equity investment support. For some of these projects the result could be offset costs and an increased potential for advancement.

According to reported totals from the Quebec Mining Association, gold production is the primary source of mineral revenue in the province, followed by nickel, zinc, and copper. With the value of gold produced in Quebec representing a 40 percent premium to the nickel produced in the province, the largest impact might be for companies producing gold.

IAMGOLD (TSX:IMG,NYSE:IAG), a Canadian mid-tier mining and exploration company, operates the Doyon Division, which consists of the Doyon and Mouska underground gold mines, located in Northwestern Quebec. The nearby Westwood project is expected to produce an average of 186,000 troy ounces of gold per year for 16 years commencing next year. There is no gold production planned at Mouska in 2012; it is expected to stockpile ore that will be processed in 2013 at the mill currently being refurbished for the start up of Westwood. The company also operates Niobec Inc., which produces more than 4.5 million kilograms of niobium annually and owns a rare earth element resource close to its niobium mine.

Osisko Mining (TSX:OSK,OTC Pink:OSKFF) is a gold mining company based in Montreal. The Canadian Malartic project has moved into production and currently represents the single biggest gold mine in production in Canada. It has proven and probable reserves of 10.7 million troy ounces of gold, and the company reports that it is still growing through ongoing drilling on adjacent mineralized zones.