The current economic climate in the western hemisphere is reminiscent of the 2008 Crash and the understandable fear that we’re heading into the Great Recession 2.0 has investors seeking safe haven assets. What will happen to silver prices if the current economic crisis spirals into a repeat of 2008? 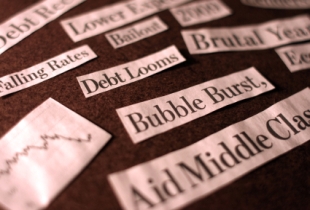 Concerns over the slowing growth in the US and Chinese economies, the ever-worsening sovereign debt crisis in the Eurozone, and the S&P’s US credit rating downgrade Friday are all placing much of the global investment community into a state of déjà vu.

The current economic climate in the western hemisphere is reminiscent of the 2008 Crash and the understandable fear that we’re heading into the Great Recession 2.0 drove down markets around the globe again Monday morning. Except, of course, in the precious metals markets where gold broke $1,700 an ounce to reach a high of $1,721.70 close at $1,718.20 an ounce. Silver posted gains as well, although not as impressive as gold’s. The white metal hit a high of $39.85 an ounce, finishing out the day at $39.13 an ounce. Silver only gained 1.85 percent compared to gold’s 3.23 percent, a sign the market is factoring in the possibility of decreased industrial demand as evidenced by the declining price of crude oil and base metals such as copper.

Investors are seeking shelter from an inevitable storm. “Those buying and holding gold see the recent political bickering in the US and European Union, unstable currency markets and flagging world economies as pointing them directly to what they perceive as the ultimate world currency: gold,” said Kitco’s Jim Wyckoff. And, of course, safe haven seekers are expected to turn to silver as well, as a cheaper alternative to gold.

While the US government is too embroiled in a steaming heap of political nonsense to act responsibly and get its fiscal house in order, EU leaders are scrambling to get hold of their own financial mess which is spreading into the region’s bigger economies, including Italy and Spain. At an emergency meeting this weekend, the European Central Bank said it would lend a big hand by taking on more EU debt through the purchase of Spanish and Italian government bonds—but Monday’s market reaction shows the promise didn’t go far enough toward easing investor fears.

For the most part investors are not convinced that the US and European governments have the ability to solve these problems. And they are most likely right.

“We are witnessing well-informed investors conclude future employment and production in the West is in jeopardy as a result of the governments’ apparent inability to solve problems,” writes MSNBC’s Dylan Ratigan in a Huffington Post blog. “They are seeking to reduce their exposure to the future production of Western countries because it does not appear that these governments can deal with expectations of sustained unemployment and diminished prosperity in a way that is constructive.”

Up the creek without a paddle

The crisis in the States has reached the breaking point, or so says Christina Romer, former chair of Obama’s Council of Economic Advisors, who on a recent Real Time with Bill Maher responded to Maher’s tongue-in-cheek question, “How f**ked are we?” with an eye-brow raising “pretty darn f**cked.”

Even China is calling out the US on its inability to deal with its “addiction to debts” and dysfunctional political process. State-run Xinhua News Agency delivered the stinging commentary following the S&P’s now hotly contested down-grade decision. Xinhua went on to call for giant cuts to the western superpower’s “gigantic military expenditure and bloated social welfare costs” and suggested replacing the dollar as the global reserve currency.

The Asian nation is the largest foreign holder of US debt with holdings of $1.2 trillion of US Treasury debt. “China, the largest creditor of the world’s sole superpower, has every right now to demand the United States to address its structural debt problems and ensure the safety of China’s dollar assets,” said Xinhua.

While investors’ moves in the markets today belie heavy fears we’re headed for another Great Crash, the resulting recession may be even worse than the one from which the world is still just clawing its way out, explains Salon.com’s Andrew Leonard. During the 2008 crisis, governments worldwide “took strong action to counteract financial panic,” however, today, the “game has changed,” Leonard warns. “There will be no new fiscal stimulus. The European Union may be scrambling to figure out how to bail out its constituent members, but it is difficult to imagine the US assisting in any major effort to stabilize markets, outside of another effort by the Fed to inject even more liquidity into the system. The critics who argued that the best solution to the crisis of 2008 was to let beleaguered financial institutions crash and burn may get their chance this time around. After the Budget Control Act of 2011, the US government has essentially handcuffed itself to a chair.”

Where are silver prices headed?

It’s interesting that Leonard cites the only strategy the US has left is to let the Fed “inject even more liquidity into the system.” The possibility of QE3 is on the minds of everyone, especially gold and silver investors, and this is definitely playing into the positive price action.

The question is what will happen to precious metals prices if the current economic crisis spirals into a repeat of 2008.

For gold, the prognosis is up, up, up with the expected fall backs here and there as the market pauses on profit-taking with investors seeking to use their gold holdings to cover losses elsewhere. While for silver, industrial demand is expected to take a hit along with that of base metals and this may keep the white metal from benefiting as much as gold from increasing safe haven demand.

Barclays Capital has changed its rankings for several commodities including gold, silver and base metals in light of slowing economic growth in the US and China, and the worsening debt crisis situation in the EU. The firm is now heavily overweight in gold and marginally overweight in silver. Deutsche Bank puts gold and silver prices at an average of $1,750 an ounce and $41 an ounce, respectively, for the fourth quarter. Morgan Stanley expects the gold bull market to continue with or without QE3 and maintains “a positive outlook for silver, although investors must remain cognizant of the greater levels of volatility,” said the report. “We believe silver’s precious metal status and therefore its links with gold have been strongly reinforced by investors’ preference to hedge systemic financial risk through a cheaper vehicle with similar ‘store of value’ characteristics as gold.”

A look back at the price actions for gold and silver following the Crash of 2008 shows prices for the precious metals falling steeply in the several weeks after, only to post amazing gains by the end of 2009. Gold prices in early October 2008, during the traditional seasonal highs for the metal, were trading in a range of $900 to $920 before falling into the $680-700 range in late October. Gold’s safe haven appeal allowed for a considerable recovery by December and prices continued to trade in the $800 to $950 range for the next few months.

Although lagging industrial demand from a financially-crippled world economy is bound to limit silver’s gains, precious metals, including silver, will most likely continue to do well if Ms. Romer’s funny, but-not-so-funny prognosis proves true.

*Based on Kitco price charts.