What happened in the silver market in Q1? Our silver price update covers supply, demand and other key factors impacting the metal.

Silver held strong to start the year, moving past US$27 per ounce during the first week of January.

Values pulled back slightly mid-month before a broad-scale investment rush spurred by enthusiasm on social media drove the white metal to an eight year high.

The silver squeeze and subsequent news cycles supported silver’s higher threshold through February, but fell short at month’s end, when values dipped below US$27.

Overall, the first three months of 2021 saw silver rise more than 8 percent due to economic positivity and investor interest. Growth out of China and brightness in the US aided silver’s industrial side as many base metals soared to year-to-date highs. Read on to learn more about what happened to silver in Q1.

As mentioned, some of silver’s upside in the first quarter came courtesy of the Reddit-induced silver squeeze. The social forum set its sights on the white metal after similar efforts drove GameStop (NYSE:GME) shares to an all-time high, and interest quickly spread to other platforms.

The silver price soared to an eight year high of US$28.55 on February 1 during the height of the buzz before slipping to US$26.10 four days later.

“When history looks back at this period of time, they are going to say, ‘What was the root cause of these speculative bubbles?’ And the answer is the Federal Reserve. There is no doubt that the Federal Reserve — the easy money policy, interest rates at zero, meaning that everyone has to go searching for yield, which is in stocks — it creates these asset bubbles,” Soloway explained.

Despite being short-lived, this price bump was indicative of trends in silver coming out of the US, according to Philip Newman, director at Metals Focus.

“When the Reddit thing happened that was in many different jurisdictions,” he told INN. “But what we’ve seen since then, even though the Reddit or social media frenzy has calmed down, the US market is still going great guns, (it’s) still incredibly strong.”

Part of that strength stems from increased investment demand in 2020 that has continued into 2021.

Coins and bars were one of the few segments of the silver market to register an uptick last year, with demand rising 8 percent to reach 200.5 million ounces (Moz).

“Investment in other arenas also experienced a vintage year in 2020, with record inflows into silver ETPs and, at times, also exceptionally strong OTC buying,” reads this year’s silver survey from the Silver Institute. “Negative real interest rates and yields for the US dollar, as well as most other major currencies, were arguably the single most important factor driving investors towards precious metals last year.”

For 2021, the report, which is authored by Metals Focus, is calling for another round of rising ETP inflows, which will add an estimated 150 Moz to holdings.

As silver investment demand has steadily trended higher, so too has concern over supply, especially following a year that saw several mine closures and transportation challenges. These have compounded fears that there may be a potential supply shortage.

However, according to Newman, shortage reports stem from a massive influx in physical silver demand. “It really relates to just how quickly and how strong demand for silver and coins really surged,” he noted.

He went on to explain that mints and refiners try to anticipate demand months ahead, and were almost blindsided by the fast run up in silver demand.

“(There) is only so much a refiner or fabricator can turn out in a given period of time,” he added. “And that’s why you have seen premiums go through the roof and stay incredibly high as well.”

2020 saw physical silver demand reach a four year high, and more momentum is forecast for 2021. Demand for bars and coins is expected to rise by more than a quarter, to 252.8 Moz by year end.

Questions around silver price manipulation have also grown in the space following the silver squeeze. The issue was raised during an interview with Chris Marcus, founder of Arcadia Economics, in February.

Watch Marcus discuss the silver market in depth above.

“It hit me last night — the only way that we know if there’s anything in there is based on the word of JPMorgan (NYSE:JPM), who’s the custodian of SLV who just got fined a billion dollars for manipulating … the precious metals — and Treasury markets I might add — hundreds of thousands of times,” he said.

2020 posed many challenges for the international mining sector, resulting in a widespread reduction in mined output. Silver was no exception, with global production declining 5.9 percent to hit 784.4 Moz.

Pure-play silver producers were impacted the most, especially in Peru, where silver production dropped by 26.1 Moz.

“Last year, many operations in countries such as Peru, Mexico and Argentina were forced to temporarily halt operations due to COVID-19 lockdowns,” said Adam Webb of Metals Focus. “However, by the end of 2020, most miners had been able to ramp up operations back to full production capacity whilst implementing new procedures and protocols to protect their workers from the pandemic.”

For 2021, the production outlook is much more promising, with Metals Focus forecasting an 8 percent uptick in global production.

“We are expecting silver production to rise in 2021; however, this is not driven by higher silver prices,” said Webb, who is the firm’s director of mine supply. “This will be a result of a rebound from COVID-19 disruptions to mining operations in 2020 and new projects.”

With the silver price remaining at historical highs, the case for new silver projects and production is intensifying. The case is also being bolstered for existing projects that haven’t entered production.

“There are several large new projects ramping up in Mexico, such as Cerro Los Gatos, Juanicipio and Capela, which will further fuel production growth in 2021,” said the director of mine supply.

“However, these projects have been in construction for some time and are not related to current prices,” he continued. “So the rebound from COVID-19 disruption and new projects, particularly in Mexico, are the main driver behind our expectations that global silver output will rise by 8.2 percent year-over-year in 2021 to 848.5 Moz.”

As values continue to hold in the US$26 range, idled projects may also get a new lease on life. 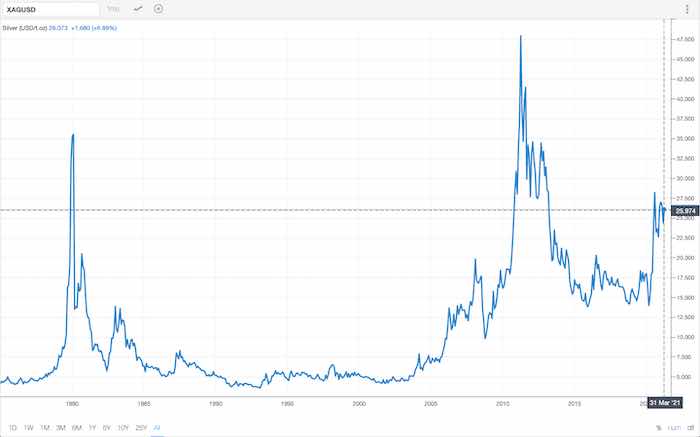 “Higher silver prices may incentivize idled operations to come back online if they previously closed due to weaker prices,” said Webb. “This could add further to silver mine supply; however, due to the scale of mines in this situation this would be a minor impact compared to the above.”

The analyst went on to note that higher prices aren’t a significant catalyst for new projects, as they take several years to come to fruition and are unlikely to benefit from today’s higher values.

“However, if companies are assuming silver prices will remain strong in the longer term, then this may incentivize positive investment decisions on new projects, which has the potential to add to silver mine supply in the longer term,” he added.

With that said, there has been broad share price growth in the silver exploration space, but that hasn’t translated to similar gains for producers.

Webb offered this explanation for the discrepancy: “Generally speaking, producer share prices are more correlated to metal prices as their profits are directly leveraged to these. Exploration companies are not producing metal and therefore do not have the same relationship to prices. Their share prices are generally more related to their exploration results (drilling results, etc.) and market sentiment.”

After slipping as low as US$12.59 last March, silver rebounded above US$28.

The white metal’s 2020 performance was noteworthy, with the metal adding 137 percent from March’s low to August’s high. It was able to outshine gold, which only added 38 percent from its 2020 low to its all-time high set in the summer.

With silver seemingly holding above US$25, Metals Focus and the Silver Institute are calling for a higher average price for the remainder of the year.

“Metals Focus expects that the silver price will rise to a peak of US$32 later this year and that it will average US$27.30 overall in 2021, which would be a 33 percent increase over the 2020 average price.”

This action would also position the versatile metal to be a top-performing commodity for 2021.

When asked what factors could derail silver’s steady momentum, Newman warned of an economic downturn or reversal. “That can be positive for safe haven demand, but that could, for example, drag down base metals and that could be negative for silver.”

The director of Metals Focus pointed out that silver’s correlation to base metals hindered its growth in the early days of the pandemic. Investors then took a bearish stance on silver as it wasn’t able to keep performance pace with sister metal gold.

“If you had that environment playing out again, that could weigh on silver. I think that could be one factor,” said Newman.

Another factor would be an economic boom prompting the Federal Reserve to reverse its stance on not raising rates. “If there was a change in that language, then that could see boats being sold off,” he added. “We think that’s unlikely.”