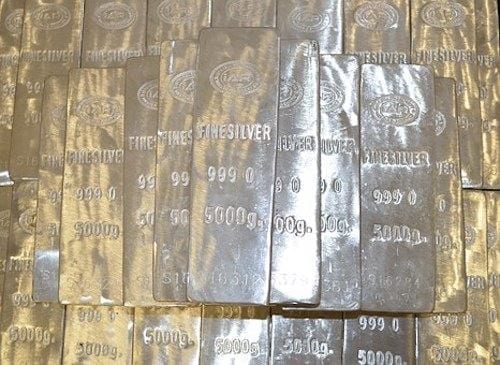 Randy Smallwood, CEO and president of Wheaton Precious Metals, talks about his company’s recent deals and the precious metals market.

Speaking about what precious metal he sees as the most exciting this year, Smallwood mentioned silver.

“I’ve long been bullish on silver. We founded the company originally as Silver Wheaton. We’re now Wheaton Precious Metals. Silver itself just has such incredible fundamentals behind it,” he said.

“As the world is more concerned about efficiency, faster processing power and longer battery life, silver has more of an attribute. It conducts electricity better than any other noble metal. And so, it will always have an application,” Smallwood added.

“It’s the first palladium that we brought into our portfolio. Typically, we have silver and gold,” he explained, adding that he thinks there’s even more upside in terms of palladium prices over the next while.

Watch the video above or read the transcript below to learn more about Smallwood thoughts on precious metals. You can also click here to view our full Sprott 2018 playlist on YouTube.

INN: We’re here at the Sprott show in Vancouver. What are you finding investors are more interested about right now? Is it the exploration sector? Is it precious metals prices?

Randy Smallwood: I see a lot of hungry exploration companies, they are courting investors here. There seems to be a lot of discussions back and forth. It’s a sector that needs some support. The industry has not been putting anywhere near the grassroots dollars into the ground as much as it should be and in terms of being sustainable. So, at some point we’re going to see a breakthrough there. Whenever I come to these shows, I always try and pick off which ones will be that success, which company will go forward. So it’s a great show for that.

INN: Speaking specifically about precious metals, have they performed as you expected at the start of the year? Any surprises so far?

RS: I think the surprise right now is the strength of the US dollar. When I sit and look at the trade tariffs and the trade issues, I sit and look at the current political leadership in the United States, but I should extend that to around the world, I’m surprised of the strength of the US dollar. I really do think that there’s probably no better time to have your investments in the hard assets and that are going to survive through all these fluctuations because there’s no doubt inflation’s coming. That’s what trade tariffs and trade battles always result in. So, yes, it’s a bit of a surprise when I sit and think about where I thought we were going to be at the start of the year. It’s a little bit more of that than what I expected.

INN: In the current market, why should investors look at a streaming company like Wheaton Precious?

INN: Earlier this year, you signed a deal with Vale (NYSE:VALE) for future cobalt production from Voisey’s Bay Mine. Why cobalt and why now?

RS: Vale is a partner, we’ve got a stream with them down on the Salobo mine in Brazil and a stream with them at Sudbury mine in Ontario. So, they approached us in the cobalt side. The more we looked at it, we realized first of all, 95 percent of cobalt is produced as a by-product. It means it comes from nickel mines and copper mines. That just means it’s got the same characteristics that silver has in terms of anytime there’s an increase in demand, there’s always going to be a delayed supply-side response because there’s no primary cobalt mines out there. There are very few primary cobalt mines out there. So, the metal itself is not a normal base metal. It’s actually, I would call it a bit of a specialty metal and getting close in terms of price to being, maybe class as a precious metal.

We also believe in the shift towards electric vehicles, you have to believe in a phase shift. So especially in China and India, we see an increase in demand on the electric vehicles side. It is going to be massive. I don’t think you’re going to see much growth on the internal combustion side and most vehicles will be electric. That demand is huge. Even if battery makers thrift and do a better job making batteries, the increase in battery demand is going to more than offset. And so, we just see cobalt as being a great commodity to invest in right now. Not only that, Voisey’s Bay cobalt, which is the cleanest, greenest, most socially responsible cobalt produced in the world. And so, we’re going to differentiate that cobalt. It’s going to be different. We think it makes a difference to know where your cobalt is coming from and knowing that it was done in a sound, social and environmental practices.

RS: Unlikely, mainly because most cobalt comes from challenging jurisdictions and those aren’t the type of jurisdictions we’d like to invest into. That’s what made the Voisey’s Bay stream so attractive was the lack of political risk and the confidence in terms of environmental performance and laborer standards that made it differentiate itself from everything else. And when we look around, we just didn’t see anywhere near that many other opportunities. So, we are a precious metals company. We are focused on precious metals. This was a unique opportunity to pulling a little bit of cobalt, which is a commodity that we’re very bullish on, but we’re still really focus on precious metals.

INN: And just a couple of days ago, you signed a deal with Sibanye-Stillwater (NYSE:SBGL,JSE:SGL). What attracted you to that asset?

RS: The asset itself, the geological potential. This is a very well understood intrusive complex that extends for 45 kilometers. I have never invested into an orebody that’s 45 kilometers-long before, but I was sure excited for the opportunity. And so, this will take us a while. It was a tough negotiation. We had some back and forth between the companies, but we finally announced it on Monday (July 18) of this week. And very, very happy we got 100 percent of the gold, and just over four percent of the palladium from this mine.

Through the gold, we get 100 percent of it from the life of the mine. And we think the life of the mine is decades, multiple decades. This is a mine that’s going to be running for many, many years into the future. And so, the opportunity to invest into it just fits perfectly into our portfolio. It’s the first palladium that we brought into our portfolio. Typically, we have silver and gold. So now we’ve got a little bit of cobalt, a little bit of palladium. We are bullish on palladium just because the palladium tends to land itself towards gasoline catalyst versus diesel catalyst. With all the problems in Europe, with respect to “dieselgate” and such, we just think there’s even more upside in terms of palladium prices over the next while.

INN: If you had to choose one precious metal that you see as the most exciting this year, which one would it be and why?

RS: Well, I’ve long been bullish on silver. We founded the company originally as Silver Wheaton. We’re now Wheaton Precious Metals. Silver itself just has such incredible fundamentals behind it. As the world is more concerned about efficiency and about faster processing power, and longer battery life and such like this, silver has more of an attribute. It conducts electricity better than any other noble metal. And so, it will always have an application, increasing efficiencies in solar panels, making batteries last longer with mobile phones, assisting with electronics on mobile cars and such.

In fact, more than half of silver is now being consumed industrially. In high efficiency electronics, silver is being consumed. And yet still, the supply-side and bulk of it comes from lead–zinc mines. Because we’ve seen such a lack of investment into the lead-zinc space, we’re not seeing any new lead-zinc mines. There are very few lead-zinc opportunities out there. So, I think that’s just going to wind up a fundamental shore in terms of supply, which should prove strong support for silver. Now, whether that happens this year or the next couple of years, but the fundamental of buying silver is the strongest I’ve ever seen.

INN: My last question for you today, any other milestones that investors can expect from Wheaton Precious this year?

RS: Well, 2018 is a foundation year for us. We’ve had a couple of term contracts expire over the last year and a half, and so our productions are a little bit lower than what we saw last year and even the year before. But we have some very incredible organic growth coming both from Penasquito, from San Dimas, from Salobo. We just have within our existing production portfolio. And then, of course, we’ve just added the Stillwater stream. The cobalt, we don’t see any cobalt until 2021, so, we won’t see any benefit there. But it’s nothing but growth in front of us.

We’ve also got, on the optionality side, Salobo is talking about a potential expansion. They expect to make a decision on an expansion by the end of this year and the base case is going to be a 50-percent increase. We already get 240,000 ounces of gold from this month per year. A 50 percent increase will move the needle. That’s their base case. They may actually decide to expand it to a larger size than that. So what I see in our portfolio is incredible growth starting from this year going forward. I see a great optionality in the Rosemont project, in the Salobo expansion plans, and Pascua Lama is still one of the best gold deposits in the world. Navidad. Then we’ve got all such a great opportunities out there, too. So, we’re very busy on the quarter front and lots of great opportunities. I call this a foundation year, we have nothing but growth in front of us.

5 Silver Stocks that Pay Dividends
Should You Invest in Silver Bullion?
VIDEO — Randy Smallwood: I’m Very Optimistic on Both Gold and Silver Prices
4 Gold Stocks to Watch in 2020

One response to “VIDEO — Randy Smallwood: “Silver Has Incredible Fundamentals””