While platinum remains below its 2007 peak, it may be a better investment than gold. 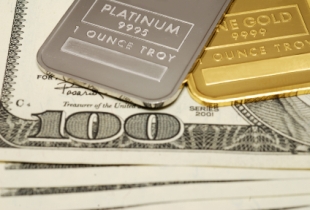 Reflecting back from the pupils of some market analysts is the glowing beam of platinum, a metal so hot it has investors seeing red.

With silver and gold recently hitting new price highs, followed by an increased cost of oil, platinum may be a rising commodity most sustainable during these fidgety economic times.

While companies are pushing consumers to sell back their unwanted gold – from television and newspapers advertisements promising to pay cold, hard cash – these short-term theoretical moves seem to indicate confidence that gold will continue to increase to new historic highs.

Could this be the sign of an impending crash? Nobody knows for certain.

Jewelery retailers are finding their costs rising right before they begin stocking up for the holiday season, during a time when many consumers find their disposable income at near lows. This could mean high jewelery prices and low sales volumes.

Gold and silver dropped Monday, before regaining to new record highs Tuesday. With so much uncertainty in metal, Bloomberg has reported that the market is overdue for a correction.

Platinum was the lone gainer in the market on October 4th, according to Benzinga.com. The trading website reported that while copper, silver and gold declined in value, platinum gained $23.60 U.S. an ounce, to trade at $1,676.80, an increase of 1.4 per cent.

But platinum is not without its own risks.

Money Morning stated that while platinum remains below its 2007 peak, it may be a better investment than gold.

The article reports that platinum is so rare that if the world supply was poured into an Olympic-size swimming pool, it would barely be deep enough to cover a person’s ankles.

With its demand driven by the worldwide auto industry and analysts at the London Buillion Market predicting that platinum prices will increase by 15 percent, the Money Morning forecasts a hefty return in the New Year for platinum investors.