Platinum had a lackluster 2017, but experts predict that demand will improve next year. Read on for our 2018 platinum outlook.

Platinum had a lackluster 2017 as prices fell on lower demand from the auto industry, but the platinum outlook for 2018 appears to be brighter.
The metal is primarily used in catalytic converters for diesel-powered vehicles; however, a lack of demand for diesel-powered cars in Europe and China this year led to a rise in price for its sister metal, palladium, which is used mainly in catalytic converters for gasoline-powered cars.
Platinum reached $1,036.10 per ounce, its highest point of the year, on February 27, but quickly fell to $943 on March 13. It tumbled even further in the next couple of months, hitting $905 on May 4. Prices recovered slightly in the summer, reaching $1,003 on August 29 and $1,017.20 on September 7. 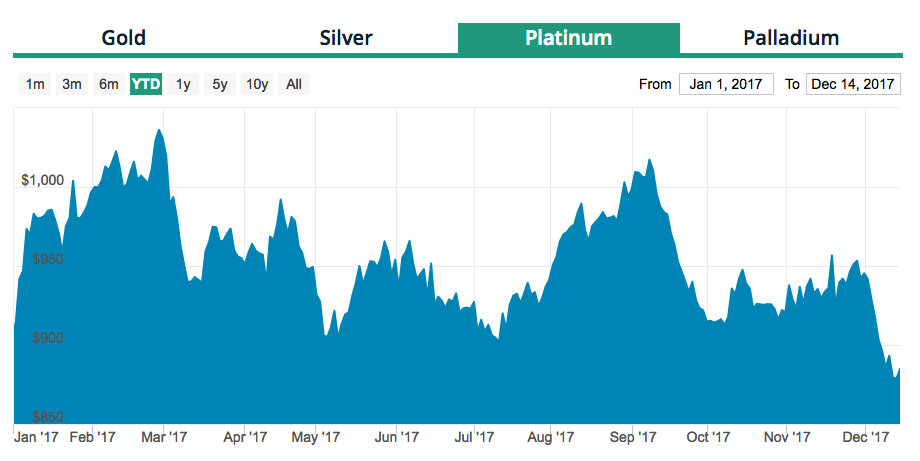 Platinum’s price performance from January 1, 2017 to December 14, 2017. Chart via APMEX.
On September 27, platinum reached price parity with palladium for the first time since 2001. A day later, palladium was trading at $936.50 per ounce — it had surpassed platinum, which was trading at $924. As of December 14, the price of platinum had fallen to $884.80.
“Platinum has actually kind of been a disappointment for investors, kind of flat to down,” commented Chris Blasi of precious metals dealer Neptune Global Holdings during the fall.
However, panelists polled by FocusEconomics expect platinum prices to rise through the end of 2017 and into 2018 on a widening supply deficit and constrained mine output. As a whole, they expect prices to average $1,057 in Q4 2018; the minimum forecast given for the period was $900, while the maximum forecast was $1,200.
HSBC said, “[w]e regard platinum as being oversold and look for a recovery in prices. Some of the supportive factors, such as limited supply and a potential for increased investment demand, are still in place, but have yet to buoy the market. That said, low prices have crimped mine investment, and limited production should eventually support prices.” The bank anticipates an average price of $1,055 next year.

Analysts at Thomson Reuters GMFS forecast a “small fundamental deficit” for platinum in 2017 because “mine production continues to be hindered by the lack of investment in earlier years.” The World Platinum Investment Council (WPIC) also forecasts a supply deficit for 2017 — it is calling for a shortage of 15,000 ounces, with that amount widening to 275,000 ounces in 2018.
Mine supply is expected to fall by 1 percent in 2017, partially due to a 2-percent reduction in South African mine supply caused by mine closures during H2 2017. FocusEconomics estimates that total output from South Africa will drop by 1 percent in 2017 from the previous year. It notes that output from Zimbabwe is expected to fall 10 percent from 2016 levels due to furnace maintenance.
The Bokoni mine in South Africa, operated by Anglo American Platinum (JSE:AMS) and joint venture partner Atlatsa Resources (TSX:ATL), was placed on care and maintenance earlier this year as the platinum price remained below $1,000.
“In platinum, we have taken necessary steps to remove unprofitable ounces from production as we focus on value over volume,” said Amplats Chief Executive Mark Cutifani at the time. Amplats also lowered its platinum production guidance to between 2.3 and 2.35 million ounces, down from its previous guidance range of 2.35 to 2.4 million ounces.
In December, the Chamber of Mines of Zimbabwe applauded a government decision to slash royalty rates for platinum-mining companies from 10 percent to 2.5 percent, saying the move will enhance viability at a time when prices are depressed. The government has also deferred a 15-percent levy on raw platinum exports until January 1, 2019 because mining firms are still establishing smelters and refineries within the country.


Grab Your Report
Industrial demand is expected to rebound by 9 percent in 2018 on increased consumption from the petroleum and glass sectors. Recycling supply is predicted to rise by 2 percent, although the WPIC says the increasing complexity of autocatalysts is making recovery of the metal more difficult. Automotive demand is expected to fall 1 percent from 2017 as falling UK auto sales are offset by growth in auto sales in Germany, Spain and Italy.
Reuters has said that TD Securities, Citi Research and ABN Amro (AMS:ABN) predict that platinum will make a comeback in 2018 because automakers may switch from using palladium to using platinum in gasoline engines.
“Demand from the automotive sector will remain firm, and there is increasing anecdotal evidence that automakers in the US and Europe are actively considering switching from palladium to platinum loadings on gasoline vehicles, which will likely have a considerable impact on short to medium-term platinum demand should it come to fruition,” added Paul Wilson, CEO of the WPIC.

Much of this year’s major platinum news came in the form of the mine closures mentioned above. However, big companies also announced other milestones that may impact the space moving forward.
In November, Impala Platinum (JSE:IMP) bought a 15-percent interest in Platinum Group Metals’ (TSX:PTM) Waterberg project, located in South Africa. In December, Platinum Group Metals said work was underway on a definitive feasibility study for the project. Probable reserves at Waterberg stand at 12.3 million ounces, with 61 percent being palladium and 30 percent being platinum.
Additionally, on December 14, Sibanye-Stillwater (JSE:SGL) agreed to buy Lonmin (LSE:LMI) for about $382 million to become the world’s second-largest platinum producer. “This is a bailout deal for Lonmin,” Nedbank precious metals analyst Leon Esterhuizen told Reuters.
Lonmin is the world’s third-largest platinum producer, and has struggled to fund its mines due to falling platinum prices.
Don’t forget to follow us @INN_Resource for real-time news updates!
Securities Disclosure: I, Melissa Shaw, hold no direct investment interest in any company mentioned in this article.
Editorial Disclosure: The Investing News Network does not guarantee the accuracy or thoroughness of the information reported in the interviews it conducts. The opinions expressed in these interviews do not reflect the opinions of the Investing News Network and do not constitute investment advice. All readers are encouraged to perform their own due diligence.