Will gold ever be able to decouple from the dollar like it almost seemed to do earlier this year, or has its status as safe haven asset irrevocably shifted to the risk-asset class? Time will tell. 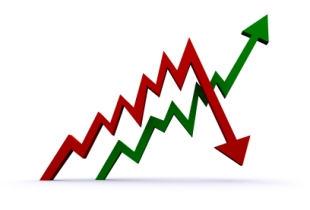 A strengthening dollar has pummeled gold down nearly $40 since last week’s Friday with help from an ailing euro, interest rate hikes out of India and those price-dropping accelerators, sell stops.

“The strength in the dollar is weighing on commodities across the board,” said Dave Meger, Vision Financial Markets metals trading director. Once heralded as a safe place to store your wealth in uncertain times, gold has become chained to the dollar and now reacts much the same way as other risk-asset commodities: A trend that adds weight to the theories of price manipulation and suppression in the heads of many a Gold-Bug GATA follower.

Will gold ever be able to decouple from the dollar like it almost seemed to do earlier this year, or has its status as safe haven asset irrevocably shifted to the risk-asset class? Time will tell.

For now, the greenback rules the gold market. As the dollar reached its highest point against the euro in nearly a year, gold slumped to a six-week low Wednesday, closing at $1087.50 an ounce in New York.

“The dollar is screaming. That’s what it’s all about,” said Leonard Kaplan, Prospector Asset Management president.

Events in the currency markets continue to strongly influence gold’s price direction, especially as traders move to the dollar as a safe-haven asset, once the function of gold itself. A stronger dollar makes commodities, including gold, more expensive for holders of other currencies.

Now that the US dollar has taken on that role and has such a negative correlation with gold, is gold’s safe-haven status no more? In a recent note, Commerzbank senior analyst Eugen Weinberg suggested that investor demand for gold as a safe haven asset is diminishing.

As long as the dollar continues to strengthen, gold will have trouble maintaining the $1100 level and may, some analysts insist, be pushed back down to around $1000 an ounce. GFMS Analytics Ltd. warns gold may fall to $1030 an ounce over the next few weeks.

But is the dollar’s recent performance tied to actual fundamentals, or solely to the euro’s woes?

As the euro suffers under the weight of financial crisis, investors are running to the perceived safety of the dollar.

How long will the dollar bull continue? The greenback “has another period of strength left in it,” says Rhona O’Connell, GFMS managing director. Serious debt problems in the euro zone and a quicker recovery in the US vs. the European economy both “point to renewed dollar strength.”

However, there are reports this week of better than expected economic data from Germany and the highest reading for Euro-Zone PMI in several years. Unfortunately, this news was all but ignored in the currency markets as Greece and Portugal’s financial problems took center stage.

Can a dollar bull based on weakness in the euro really be sustained? Perhaps not, say some. But, the US currency is also gaining support from strong US data showing the economy is improving. For example, this week the dollar gained on positive manufactured goods data, which has risen for three months straight as of February; although orders for durable goods rose less than expected.

So, manufacturers are producing more but consumers still aren’t consuming as much as they should? That doesn’t sound like economic recovery. With so many still out of work and for longer and longer periods, many American’s are finding they are less able to purchase goods, especially if it means foregoing a mortgage payment, groceries or (expensive) health care costs.

Can the Gold Price Rise Further?

As problems in the euro zone persist the dollar will continue to find support and gold will have problems moving much farther past the $1100 level; especially with physical demand in jeopardy.

India’s recent interest rate hike filled the market with fear physical demand from the gold-hungry nation would lag.  “It would probably serve to slow their economy and decrease future consumption of gold for jewelry demand,” said Tom Pawlicki, MF Global.

As the world’s largest consumer of the yellow metal—nearly 33 per cent of total world consumption in the fourth quarter of 2009—any sign demand from India might decrease has a huge impact on gold prices.

However, optimistic sentiments still exist. “We think that a sustained decline below the mark of $1,100 an ounce is unlikely, since this level should attract new buyers,” said Mr. Weinberg.

There are positive indicators, but they’re mostly overshadowed by the worrying news out of Europe. Hints of potential supply disruption are coming out of Russia where gold output is said to being declining.

Physical demand is showing some signs of hope as New York’s SPDR Gold Trust, the world’s biggest bullion-backed exchange-traded fund, reported an increase of 4.6 tonnes to its holdings Tuesday, which is the ETF’s first recorded increase since March 5. “The increase in ETF holdings yesterday is encouraging, as is the scale of buying around and below $1,100, and suggests further pockets of investment diversification will continue to underpin prices,” said James Moore, analyst at TheBullionDesk.com.

Other encouraging signs for gold’s safe have status are found in Europe itself where investors are turning to gold in times of risk-aversion.

Where gold is going is hard to say with all these variables, but in the short-term we can expect the spot price of gold to encounter further pressure from a dollar riding higher on Europe’s financial problems.

5 Top Weekly TSXV Stocks: ReconAfrica Jumps Over 100 Percent
What Do Medical Device Companies Do?
5 Gold Stocks to Watch in 2021
Best Junior Copper Stocks on the TSXV