Wesdome Gold Mines Ltd. (TSX:WDO) announced its gold production results for the third quarter of the year, commenting that output came in at 15,493 ounces.

Wesdome Gold Mines Ltd. (TSX:WDO) announced its gold production results for the third quarter of the year, commenting that output came in at 15,493 ounces. During the period, the company sold 13,069 ounces of gold at an average sales price of C$1,619 per ounce.
As quoted in the press release: 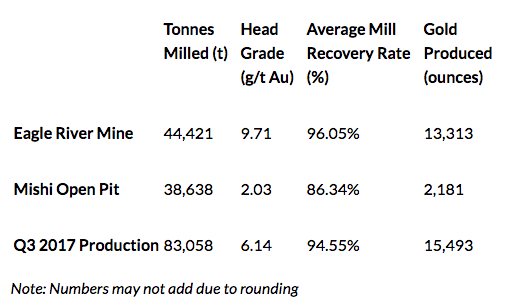 As a result of improved development rates in Q2, we have significantly increased the mineable inventory of higher grade ore at the Eagle River Underground Mine. Milled underground tonnes increased 27% over Q2, while head grades remain above reserve grades.  Development into the high grade 303 Zone is nearing completion to allow for stope production at the end of Q4, and will be in ore production throughout 2018. Year to date production of 43,184 ounces has us well positioned to achieve our 2017 guidance range of 52,000 – 58,000 ounces.
Additionally, we are pleased to announce that in Val d’Or, Quebec we expect to resume drilling on the Kiena Deep discovery next week.  The new drill bay has been completed from the exploration ramp, and we are currently mobilizing an existing diamond drill to the newly established platform.