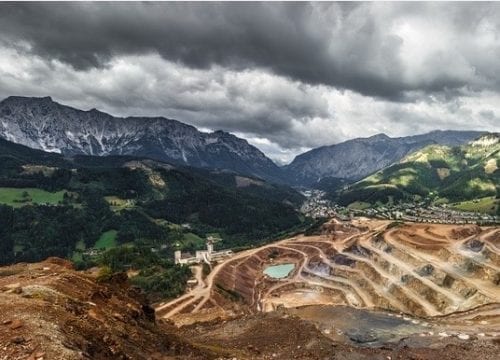 In an interview at the Sprott Natural Resource Symposium in Vancouver, CEO of First Mining Gold Jeff Swinoga talks about gold, and what his company has in the pipeline in a market that’s priced low with a supply deficit on the way.

In an interview with the Investing News Network (INN), CEO of First Mining Gold (TSX:FF) Jeff Swinoga cast doubt on any fears of “peak gold,” saying that a lack of major gold discoveries in the past few years happened mainly because of majors divesting assets to lower debt.

“[There’s] been a lot of talk about peak gold, how we’re not going to find another large gold deposit … I’m not sure if that’s true, but what I do know is that we are running into a supply deficit,” said Swinoga.

He said that over the past few years major producers have been divesting assets and decreasing debt levels, which has resulted in a reduction in production profiles and exploration projects.

And now, “they’re having to mine lower grades going forward, which means that they’ve increased their costs, and what we’re seeing is with production falling off that there’s a lack of replenishment into their production profile.”

He said that his own company, First Mining Gold, with its portfolio of gold assets across North America, is well positioned to weather the dearth of new projects as the supply deficit sets in.

On peak gold, Swinoga said he isn’t so sure it is an issue at the moment, but it is coming. “I’m not sure that we’re there now, but I certainly see it on the horizon … if we don’t find any more major gold deposits then we are going to get a supply deficit.”

He said that even if major discoveries are made today, the damage has been done as it will take too long to bring them into production.

“I think peak gold is coming up if we haven’t hit it already … we’ve got all these gold projects [so] I’m very happy that we’re not in that situation.”

Watch the full interview above, or scroll down and read the full transcript below.

INN: So, it’s day 2 of the symposium how do you feel about it so far?

Jeff Swinoga: I really like the forum, I really like the how they setup the format. It’s a great way to meet investors and talk about our projects and the large resource base that we have. So, I’m finding it a great venue to be quite honest.

INN: And yesterday you hosted a workshop that was a titled: “Mining road map: discovery to reclamation” What can you tell me about what you spoke about?

JS: Well, it’s a workshop format so what we did was we first talked about the company. We talked about our large and diversified portfolio of gold assets. Within there, we’ve got Springpole. Springpole is one of the largest undeveloped gold projects. It’s actually the largest in Ontario. So very significant, very large, very attractive, low cost as well. So, what we did is we did a teach-in about how we expect to develop Springpole over time. Just some of the metrics on Springpole, for example it’s got a 12-year mine life, 800 million after tax present value, over 26 percent IRR. It’s got a 300,000 per year production profile. A cost of about US$700 all in sustaining costs. So it’s large, attractive, it’s in Ontario, which is a 110 km east of the Red Lake mine, which is Goldcorp’s (TSX:G) company maker. So, we’re very happy to have it we’re going through an environmental assessment right now. We actually showed a video, it’s on our website if people want to see it but shows how we plan to develop over time and put it to reclamation. So, it was a great way to talk about some of the geology, how we found it, some of the history, talk about  again the metrics and then how we plan to develop it. It was great.

INN: And how far away from operation do you think it is?

JS: Well, the road map we’re going to take about probably 2 years to go through the environmental assessment. We’re going to look at doing a pre-feasibility study early next year or into next year. We’re doing some metallurgical testing later this year and then we’re going again to permitting, constructions going to take up to a year. So, we see first gold in 5 years, which is pretty reasonable, it’s been drilled out, it’s already sizeable, I don’t think we need to drill much more like five million almost five million. It’s huge. So, the goal here is to de-risk it, focus on the work with the local communities, indigenous cultures, create engagement. So, in 5 years we’re going to have first gold. It’s going to be great.

INN: So, what have attendees at the symposium been asking you about?

JS: Well, it’s actually very interesting because I’ve got to tell you, not a lot of people know about Springpole. They don’t know how sizeable it is, we got questions about how we look to engage locals and indigenous cultures and I’ve had the opportunity to talk about how we want to step back and look at a holistic approach to this and how we do things in Ontario. Because not only that we have Springpole, again it’s almost five million ounces, but we’ve got three other projects in Ontario. We’ve got Goldline, we’ve got Cameron, we’ve got Pickle Crow. So, we look at how we want conduct ourselves going forward and how we want to create engagement and talk about future jobs and all the things that come with these great projects and how the vision is to become a very large gold-producing company in Canada. It’s good, great opportunity to talk about how we want to do that. We’ve got a values-based culture. We use these values for making decisions, for communication strategy and all that leads to is building long-term trust and that trust between government officials, shareholders, local community, indigenous and it’s great it’s been a really good format to explain all that in a workshop.

INN: Okay, so if you’ve got a lot of new investors having a look at First Mining. Is there any big news in the pipeline coming our way?

JS: We got some, what I mentioned, the metallurgical study. So, what that study is going to do is we’re going to look at the flow sheet for Springpole. We’re hopeful that’s going to improve the recoveries as well and probably the primary purpose, but if it does improve our recoveries that would be very good economically. Like right now it’s a US$800 million net present value. You know if we can improve recoveries to let’s say 80 percent or 90 percent. That’s extra US$400 million of value for shareholders. So, we can’t promise that, but that’s something that hopefully we can do. Then we also talked about pre-feasibility study next year. Another asset we have or property is called Goldline. Goldline’s pretty exciting it’s got about fifty kilometers strike-length. We’ve only been exploring 2 or 3 kilometers of it and so what we’ve done now if you gone up 10 kilometers and see if what we’re trying to do there with this region exploration program is see if we can find the same type of mineralization that we have with the 2-3 kilometers and so if we do that then you know hopefully there’s more along that strike so Goldline could be quite large. So it’s very exciting though results probably coming out in the next month or so. So that’s another catalyst that’s coming up. And then probably a number of press releases on how we’re going through the environmental assessment and then giving people an update on Springpole. So, lots of news coming up and it’s just great I love working on properties in Ontario. I’ve worked in Africa and South America and Mexico and half these properties in Canada is just great.

INN: So, there’s plenty to look forward to.

INN: And so, over the past few days the gold price has been on the way down. What do you make of that?

JS: Well, I think there’s ebbs and flows with any price, right? But if you look out five to ten years and what’s happening is that, gold, large gold producers have actually done a very good job of divesting of assets, decreasing their debt levels but what’s been the result of that is that going forward, there’s been a reduction in their production profiles, they’re having to mine lower grades going forward, which means that they’ve increased their costs and what we’re seeing is with production falling off that there’s a lack of replenishment into their production profile. So, what does that mean? It means that they are going to try and find new deposits in further jurisdictions. There haven’t been any new major gold discoveries this year in 2018 or in 2019. So, we’ve seen a real fall off on that. Even when exploration has hit all time high a couple years ago. So, you know it’s been a lot of talk about peak gold, how we’re not going to find another large gold deposit. I’m not sure if that’s true but what I do know is that we are running into a supply deficit. So, what does that mean? Means that if they can’t replenish their production they’re going to have a look at acquiring properties. The fact that we’ve got five million ounces of inferred and seven million ounces of indicated ounces. We’ve got a great portfolio right now, right? So, it means the value what we found already, what we have at our company should valued much higher.

INN: Okay and you mentioned peak gold. Can you just explain that, what you feel about that, whether we’re there or not?

JS: Well, you know I’m not sure that we’re there now but I certainly see in the horizon that if something, if we don’t find anymore major gold deposits then we are going to get a supply deficit. So, a couple of things have to happen there, probably gold price goes up, which means more exploration, but then it takes time like even if you find a mine. It takes probably ten years to get it into production. Like it takes time to drill it out. You have to look at the infrastructure. You have to look at the local community, are they supportive? and then ultimately get hopefully in production. So even if they find something now we’re still going to hit the supply deficit. So, I think peak gold is coming up if we haven’t hit it already and the fact that again we’ve got all these gold projects I’m very happy that we’re not in that situation, but this makes us very undervalued right now and it reflects that something has to happen, something has to change here.