Searchlight Resources Inc. is pleased to announce that the Company has commenced an airborne geophysical survey on the newly acquired Flin Flon North.

Searchlight Resources Inc. (“Searchlight” or the “Company”) (TSXV:SCLT) is pleased to announce that the Company has commenced an airborne geophysical survey on the newly acquired Flin Flon North claims located approximately 10 kilometres northwest of Creighton, Saskatchewan and the city of Flin Flon, Manitoba.

The survey is being conducted by Precision GeoSurveys Limited and includes airborne time-domain electromagnetic (TDEM) and magnetometer surveys. Approximately 550 line-kilometres will be flown at 75m line-spacing covering approximately 37 square kilometres, with the survey to be completed before the end of September.

“Searchlight wanted to follow-up quickly on the Flin Flon North option given the highly prospective geology and multiple exploration targets just a few kilometres down the highway from Flin Flon and the 777 mine” stated Stephen Wallace, President and CEO of Searchlight. “The purpose of this survey and ongoing compilation is the development of high-quality base metal and gold drill targets for near term drilling.”

The Flin Flon North claims were optioned last month based on Searchlight’s ongoing regional compilation to target the most prospective areas in the Flin Flon Greenstone belt for new VMS base metal and gold mines. 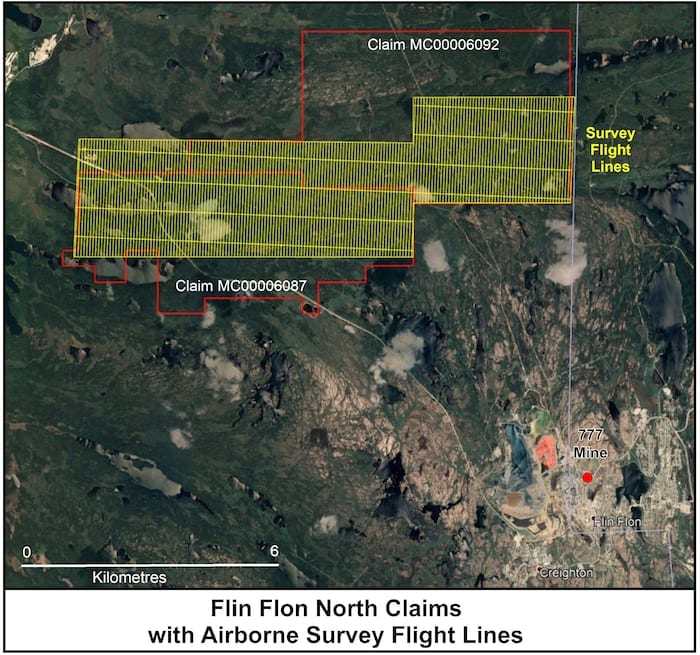 Stephen Wallace, P.Geo., is Searchlight’s Qualified Person within the meaning of National Instrument 43-101 and has reviewed and approved the technical information contained in this news release.

Searchlight Resources Inc. is a Canadian mineral exploration and development company listed on the Toronto Venture Exchange (TSX-V: SCLT). The corporate strategy of the company is:

Information set forth in this news release contains forward-looking statements that are based on assumptions as of the date of this news release. These statements reflect management’s current estimates, beliefs, intentions and expectations. They are not guarantees of future performance. The Company cautions that all forward-looking statements are inherently uncertain and that actual performance may be affected by a number of material factors, many of which are beyond the Company’s control. Such factors include, among other things: risks and uncertainties relating to the Company’s limited operating history and the need to comply with environmental and governmental regulations. Accordingly, actual and future events, conditions and results may differ materially from the estimates, beliefs, intentions and expectations expressed or implied in the forward-looking information. Except as required under applicable securities legislation, the Company undertakes no obligation to publicly update or revise forward-looking information.

Click here to connect with Searchlight Resources Inc. (TSXV:SCLT) for an Investor Presentation.