The mineralization identified consists of a shear occurring in a granodiorite proximal to the contact between the coastal intrusive rocks and Bridge River sedimentary rocks. The average of the 15 samples collected over this 13 by 16-meter zone is 2.37 g/t Au, 5.2 g/t Ag, and 0.55% Cu. The results from these samples are tabled below: 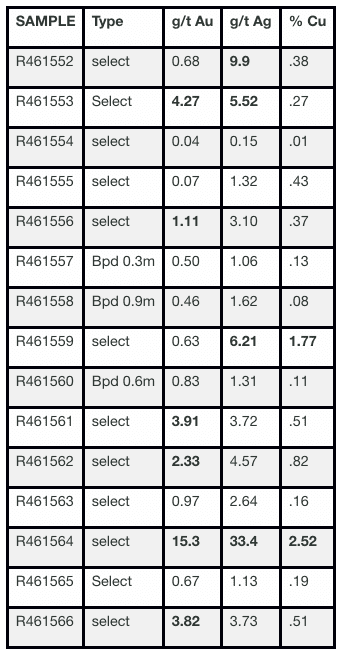 * The reported lengths are intercept lengths and are not true widths

“We’re encouraged with the results from this preliminary program and are formulating follow up options to test the mineralization encountered,” said Senior VP Exploration, Warren Robb. “We are of the opinion that the shear encountered is the surface expression of the mineralization occurring in the old pilot mine workings. This represents a sizeable target zone and one we’re eager to continue to explore. These early results, combined with the historical data, make New Pilot a compelling exploration target,” continued Mr. Robb.

Historical records indicate the property was purchased by Pilot Gold Mines Ltd. in 1934, who developed the Pilot Mine, consisting of drifts, crosscuts and a winze totaling 1,500 metres of underground workings. Work ended at the mine in 1945.

The Company plans a follow up program that will test additional areas of interest on the property and to delineate further mineralized zones that add to the target inventory.

About the New Pilot Gold Project

The Project location is situated at the contact of the Coast Crystalline Complex and the Bridge River sediments. Over the past 80 years several exploration programs have been conducted over or near the property, initially concentrating on the Pilot Mine and its strike extension. The Project is relatively close to the producing Bralorne Pioneer Mine, lying 18 kilometres to the south east. 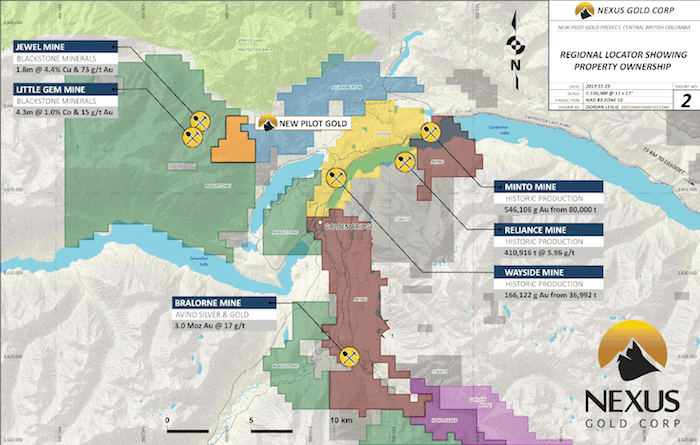 The Bralorne gold camp represents one of Canada’s most prolific mining operations. From 1928 to 1971, the Bralorne and nearby Pioneer and King mines produced 4.15 million ounces of gold from 7.9 million tons of ore*. The Bridge River Mining Camp is the largest past producer of gold in British Columbia**. In 2017, Blackstone Minerals Ltd, an Australian-based company, acquired the Little Gem Project, a high-grade cobalt and gold project, located approximately 900 meters from the New Pilot location.

Nexus Gold is a Vancouver-based gold exploration and development company with a portfolio of active projects in West Africa and Canada. The Company is concentrating its efforts on establishing a compliant resource at one or more of it’s four current West African-based projects which total over 560-sq kms (56,000+ hectares) of land located on active gold belts and proven mineralized trends, while also conducting ongoing developmental work on its five 100%-owned Canadian projects, namely the McKenzie Gold Project in Red Lake, Ontario, the New Pilot Project, located in BC’s historic Bridge River Mining Camp, and three prospective gold-copper projects (3,300-ha) in the province of Newfoundland. For more information please visit www.nexusgoldcorp.com.