Great Bear Resources (TSXV:GBR, OTC:GTBDF)(the “Company” or “Great Bear”) today reported the discovery of a new gold control within its Dixie Limb Zone (“DL”) target which is associated withthickened and higher-grade gold mineralization. The new discovery enhances the DL as a significant potential host of high-grade gold. The DL is the original gold discovery at the Dixie project, made by Teck Resources. It is located approximately 200 metres to the north of, and is sub-parallel to, Great Bear’s 2018 high-grade gold discovery at the Hinge Zone (“DHZ”).

Nine additional drill holes have also been completed into the Hinge Zone for which assays are pending; these results will be released when available. Continued drilling of the DHZ remains a top priority through 2019 and 2020, as part of the Company’s fully-funded 60,000 metre drill program.

The Company also reports it has entered into a binding Letter of Intent (“LOI”) with GoldON Resources Ltd. (TSX-V: GLD, “GoldON”) wherein GoldON has the option to earn an initial 60% interest, and a subsequent 100% interest in Great Bear’s West Madsen property.

The Dixie Limb zone is a major gold target at the Dixie project, second only to the Hinge Zone in exploration importance. This is due to its potential size, strong continuity of grade, and the presence of gold extending to within a few metres of surface. Great Bear’s recent drilling successfully tested newly interpreted high-grade gold controls in the zone. Results include:

Table 1: Current drill results from the DL. Higher-grade mineralization is associated with a newly defined steeply-plunging structural intersection. All widths are drill indicated core length as insufficient work has been completed to define true widths. 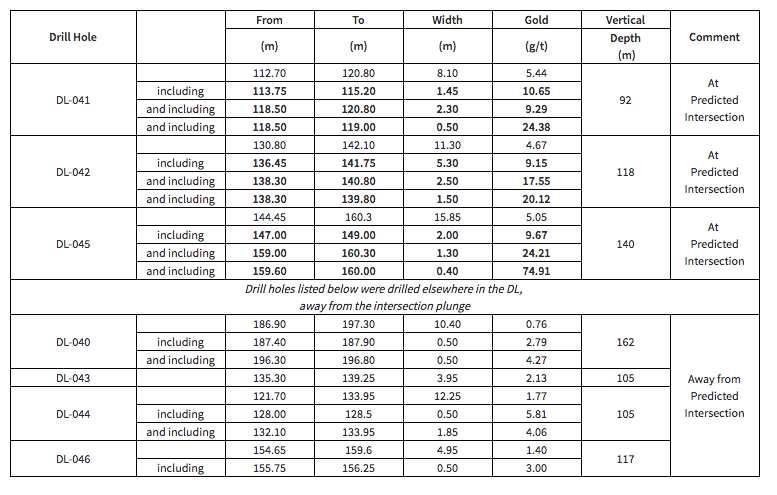 Chris Taylor, President and CEO of Great Bear said, “While it’s hard to compare almost any mineralization to the exceptional gold at the Hinge Zone, the Dixie Limb displays impressive silica-sulphide replacement with gold that predictably occurs in over 100 drill holes targeting the same geological contact across a large area. We now observe that the same late gold event that has led to high-grade mineralization in the Hinge Zone also positively affects the Dixie Limb. We look forward to further defining high-grade steeply-plunging gold zones within this target, and will drill to determine how many of these “upgraded” gold zones are present within the DL.”

Table 2: Historical drill holes from Great Bear and previous explorers intersecting the DL along 100 metres of strike length centred on the predicted intersection. All widths are drill indicated core length as insufficient work has been completed to define true widths. 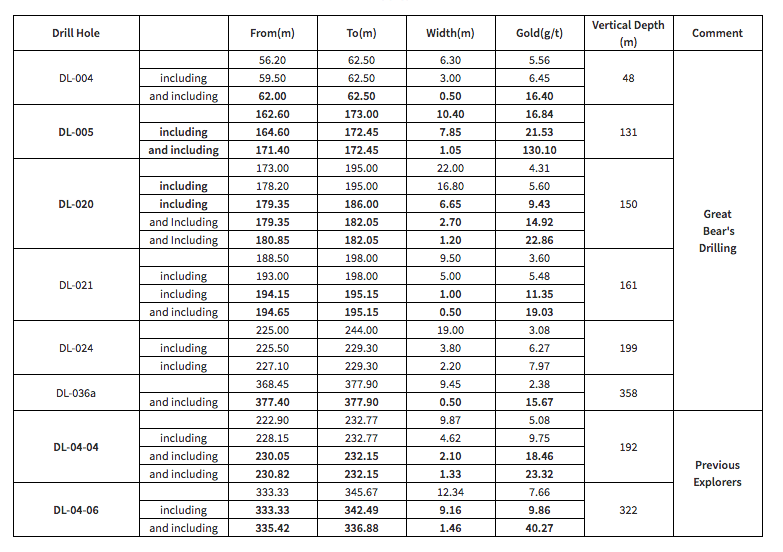 Recent drilling has intersected both the DL and Dixie Hinge Zone (“DHZ”) within the same north-south directed drill holes, crossing the intervening area between the two zones as shown on Figure 1. It was recently noted that an east-west trend of gold mineralization is present between the two zones in the northern, hanging wall portion of an ultramafic unit and fault that divides the DL from the DHZ. The new mineralized trend is a gold-bearing quartz vein similar to gold-bearing vein in the Hinge Zone, which occurs to the south. 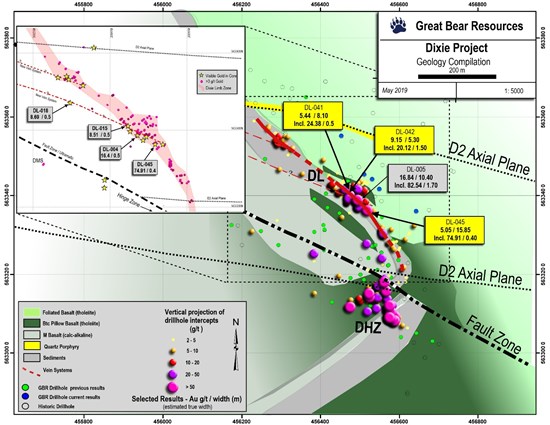 It was noted by the Company that most historic drill holes within the DL display increased grades and thicknesses of gold mineralization along approximately 100 metres of strike length centred on the predicted intersection of the the new gold-bearing vein and the DL. Three follow-up drill holes (DL-041, 042 and 045) were recently completed to test the predicted intersection and all encountered higher grade gold mineralization.

During the Company’s ongoing fully funded 60,000 metre drill program, the Company’s drilling within the DL will test both the currently defined steeply-plunging zone of high-grade gold mineralization, and will also explore to define additional structural intersections within the DL that may also relate to higher grades. Drilling will also continue at the DHZ as previously disclosed on April 1, 2019.

Chris Taylor said, “Great Bear recently announced a significant expansion of its drill program at our flagship 100% owned Dixie property. While we are optimistic about the exploration potential of West Madsen, our primary focus is significantly accelerating our exploration efforts at Dixie. We are therefore pleased to have GoldON actively explore West Madsen for potential on-strike gold mineralization from Pure Gold Resources’ Madsen property. A retained net smelter royalty, together with share and cash payments to Great Bear, will continue to provide positive exposure for our shareholders to any discoveries that may be made at West Madsen.”

Signing of the LOI will be followed by finalization of a definitive agreement between Great Bear and GoldON. In order to earn an initial 60% interest in the property, GoldON must:

(a) incur minimum exploration expenditures on the property, as follows:

(I) $100,000 on or before the first anniversary of the definitive agreement;

(II) a cumulative total of not less than $350,000 on or before the second anniversary of the definitive agreement; and

(III) a cumulative total of not less than $750,000 on or before the third anniversary of the definitive agreement; and

(b) pay cash to Great Bear as follows:

(II) $50,000 on or before the date that is 10 days after the first anniversary of the aefinitive agreement; and

(III) $75,000 on or before the date that is 10 days after the second anniversary of the definitive agreement; and

(II) 250,000 shares on or before the date that is 10 days after the first anniversary of the definitive agreement; and

(III) 375,000 shares on or before the date that is 10 days after the second anniversary of the definitive agreement.

(a) incur additional exploration expenditures on the property of at least $750,000 on or before the fourth anniversary of the definitive agreement, and

(b) pay $500,000 cash or issue 500,000 shares to Great Bear at GoldON’s election on or before the date that is 15 days after the third anniversary of the definitive agreement.

Great Bear will retain a 2.5% Net Smelter Return royalty after GoldON completes the initial 60% earn-in. GoldON will have the right to buy back 1% of the royalty for $500,000 at any time prior to a production decision being made on all or part of the property. The LOI and pending definitive agreements are subject to Exchange approval.

The Dixie property is located approximately 15 minutes’ drive along Highway 105 from downtown Red Lake, Ontario. The Red Lake mining district has produced over 30,000,000 ounces of gold and is one of the premier mining districts in Canada, benefitting from major active mining operations including the Red Lake Gold Mine of Goldcorp Inc., plus modern infrastructure and a skilled workforce. The Dixie property covers a drill and geophysically defined 10 kilometre gold mineralized structure similar to that hosting other producing gold mines in the district. In addition, Great Bear is also earning a 100% royalty-free interest in the Pakwash, Dedee and Sobel properties, which cover regionally significant gold-controlling structures and prospective geology. All of Great Bear’s Red Lake projects are accessible year-round through existing roads.