Japan Gold (TSXV:JG) is pleased to report results of surface prospecting and mapping over the historic Kitano-o Gold District. The Kitano-o Gold District is located in the center of the Company’s 19,114 hectare Ikutahara Project in North Hokkaido, Japan, Figure 1. Results highlight the presence of high-grade gold mineralization in grab samples taken from historic mine dumps and workings. 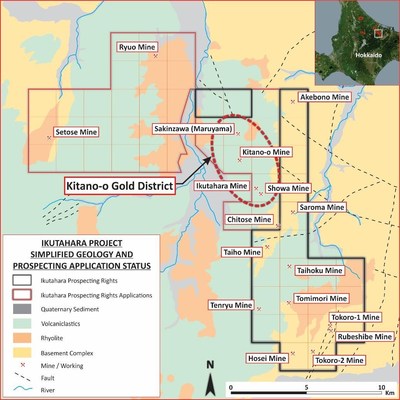 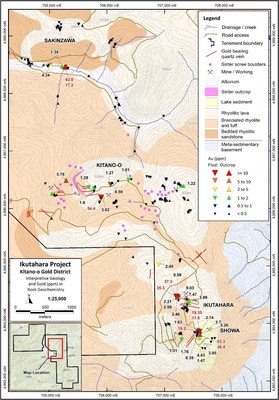 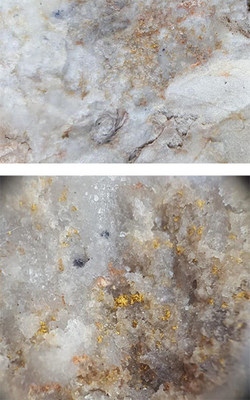 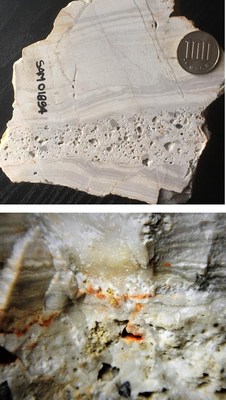 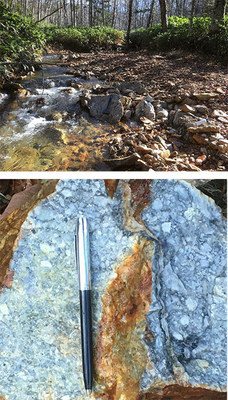 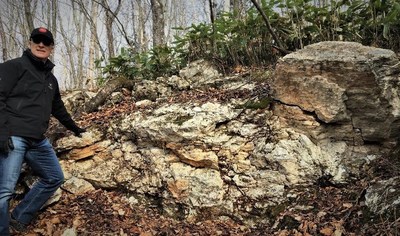 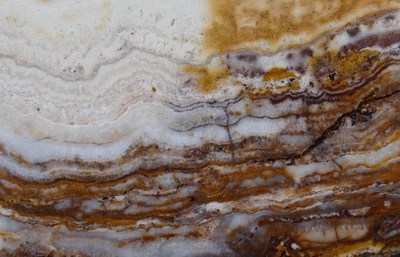 The Kitano-o Gold District includes the historic Kitano-o, Ikutahara, Showa mines and the Sakinzawa workings. Japan Gold work in the district has focused on geological and alteration mapping and geochemical sampling to develop an understanding of the controls on epithermal gold-vein mineralization. The company has designed an aggressive scout drilling program to test these targets in the 2018 field season.

Assay results were received for 270 selective grab and chip samples collected from mine dumps, workings and outcrops over the Kitano-o Gold District. Sample locations and significant gold results (>1 g/t Au) are presented in Figure 2 and Table 1.

Kitano-o Mine: One mine dump sample from the western area of the Kitano-o mine workings gave a high gold result of 54.4 g/t Au. Eight other mine dump and outcrop samples returned gold results ranging from 1.01 to 8.59 g/t Au, (refer to Table 1). Corresponding silver results are generally low and range from 1.16 to 13.2 g/t Ag.

Geological mapping completed by the Company over the Kitano-o Gold District has confirmed the presence of a significant gold-bearing epithermal system hosted in Late Miocene rhyolitic volcanics and associated intrusions. The presence of widespread silica sinter boulders and bedded sinter outcrops at Kitano-o, (refer to Figures 2 and 6) define the paleo-surface during gold deposition and importantly the well preserved nature of the epithermal mineralisation in the district.

John Proust, Chairman and CEO of Japan Gold, stated: “The significance of newly identified sinter outcrops at Kitano-o underlain by historically mined eluvial gold deposits and sub-sinter quartz veins along with confirmatory high-grade samples reported by us here underscore the compelling nature of these prospects and the potential to discover additional mineralization beneath and surrounding these extensive historic workings. A drilling program to test the Kitano-o Gold District has been prepared in anticipation of applications being granted and subsequent approvals for drilling this year.”

The historic Kitano-o Gold District consists of four known historic eluvial and hard rock gold mines and workings; Kitano-o, Ikutahara, Showa and Sakinzawa over an approximate 6 kilometre by 2.5 kilometre area. The district is highlighted by an extensive co-incident gold-arsenic-antimony mercury anomaly in stream sediment samples over the area.

Historic production from the Kitano-o mine (96,540 ounces at a grade of 5.9 g/t)7 was largely from rich residual surface gold deposits (gold-bearing eluvium). Lesser gold production is reported from selective hard rock mining of narrow sub-sinter quartz-adularia-clay veins and stockworks hosted in extensively altered rhyolitic volcaniclastics, flow-domes, lake sediments and silica sinter deposits. Production records sourced for the Ikutahara and Showa mines are include the following:

Historic Gold and Silver Production Records for the Ikutahara and Showa Mines1.

The MMAJ work defined a large shallowly eroded epithermal system encompassing the Kitano-o Gold District, documented a close relationship between gold mineralization and rhyolite intrusions and provided valuable information on the depth to basement rocks (up to 700 m).

The hard rock mine workings at Ikutahara and Showa, at the southern end of the Kitano-o Gold District, are defined by a series of collapsed tunnels and large mine dumps distributed along a north-northwest trending ridgeline.

The mine workings at Kitano-o are represented by numerous shallow diggings, pits, sluicing benches, and collapsed tunnels distributed over a 2.5 kilometre by 0.4 kilometre east-west alignment of altered conical hills and curve-linear ridges.

Historic reports and papers written on the Kitano-o mine workings1,2,3 indicate that free gold was won from rich eluvial placer deposits described as a yellow-brown clay-sand-boulder soil overburden (“Dosha-ko” ore). The auriferous eluvium averaged about 5 m thickness (max. 15 m thick) with a reported gold grade of about 5 g/t Au (max. 40 g/t Au) in the most productive areas. The dosha-ko gold deposits were formed by the disintegration and oxidation of the underlying hydrothermally altered mineralized bedrock under freezing-and-thawing cold-climate conditions (“cryogenic weathering”)2.

Multiple narrow gold-quartz veins (>130) were reportedly worked beneath and surrounding the auriferous eluvium, however, mine records on the depth of mining of the veins is sparse. The veins varied in width from <1 to 30 cm and thicker mineralised veins were only rarely encountered. Strike-lengths varied from several metres to several 10’s of metres and veins longer than 100 metres were rarely encountered. Several types of mineralised epithermal veins were reported in the district; banded quartz-chalcedony-adularia veins (Figure 7), fine-grained crystalline quartz veins, clay-rich veins and a late-stage porcellaneous clay veins1, 2.

The Sakinzawa workings are located at the northern end of the Kitano-o Gold District. Alluvial and colluvial gold was worked along Sakinzawa creek and its broad floodplain during the 1930’s, however, there are no production records. Small hard rock gold workings on quartz breccia and stockworks have also been found along Sakinzawa creek and on the western flank of Maruyama peak, which is a prominent rhyolite flow-dome landform.

The 300 m vertical diamond hole (2MAHB4) drilled by MMAJ on Maruyama ridge intersected silicified mudstone-sandstone-volcanic breccia to 140 m depth containing minor narrow quartz veins assaying up to 2.3 g/t Au1. This is a useful stratigraphic hole but a poor test of the gold target.

Multiple gold-silver and mercury prospects, including 17 documented historic mines and workings, are located within the project area and the majority comprise epithermal veins, with other hot spring related features such as hydrothermal breccias and silica sinters.

The prospects were discovered and intermittently mined between 1910 and 1943. Gold mining in Japan was suspended 1943 under a government regulation aimed at focusing resources to more strategic commodities during World War II. Many of the historic workings that were active in the area stopped in ore and never reopened. The project area has seen only minor exploration since that time.

The technical information in this news release has been reviewed by Japan Gold’s President & Chief Operating Officer, Dr. Mike Andrews, PhD, FAusIMM, who is a Qualified Person as defined by National Instrument 43-101.

The samples reported herewith represent selected grab samples collected from historic mine dumps or selected chip samples collected from rock exposures found in historic mine adits and rock outcrops found in creeks. The selected grab samples reported in this announcement are believed to originate from the underlying bedrock. Grab samples are selected samples and are not necessarily representative of the mineralization hosted on the property. Rock sample preparation and assaying were done by ALS Chemex, Guangzhou, China. Gold was analyzed by 50-charge Fire Assay and AAS finish. 48 multielement analysis including silver were done by four-acid digest and ICP-AES/MS determination.

The laboratory inserts its own blank, standards & sub-split pulp duplicates for Quality Control and reports these results accordingly. Results fall within acceptable levels of accuracy and precision.

On behalf of the Board of Japan Gold Corp.

Japan Gold Corp. is a Canadian mineral exploration company focused solely on gold and copper-gold exploration in Japan. The Company holds 32 prospecting rights and 178 prospecting rights applications accepted in Japan for a combined area of 69,505 hectares (695 square-kilometres) over 17 separate projects. These prospecting rights and applications cover areas with known gold occurrences and a history of mining, and are prospective for both high-grade epithermal gold mineralization and gold-bearing lithocaps, which could indicate the presence of porphyry mineralization. Japan Gold’s leadership team has decades of resource industry and business experience, and the Company has recruited geologists and technical advisors with experience exploring and operating in Japan. The Company completed an initial scout diamond drilling program on a high-grade epithermal gold vein target at Akebono Prospect in late November 2017. More information is available at www.japangold.com or by email at info@japangold.com.

Click here to connect with Japan Gold (TSXV:JG) and receive an Investors Presentation.