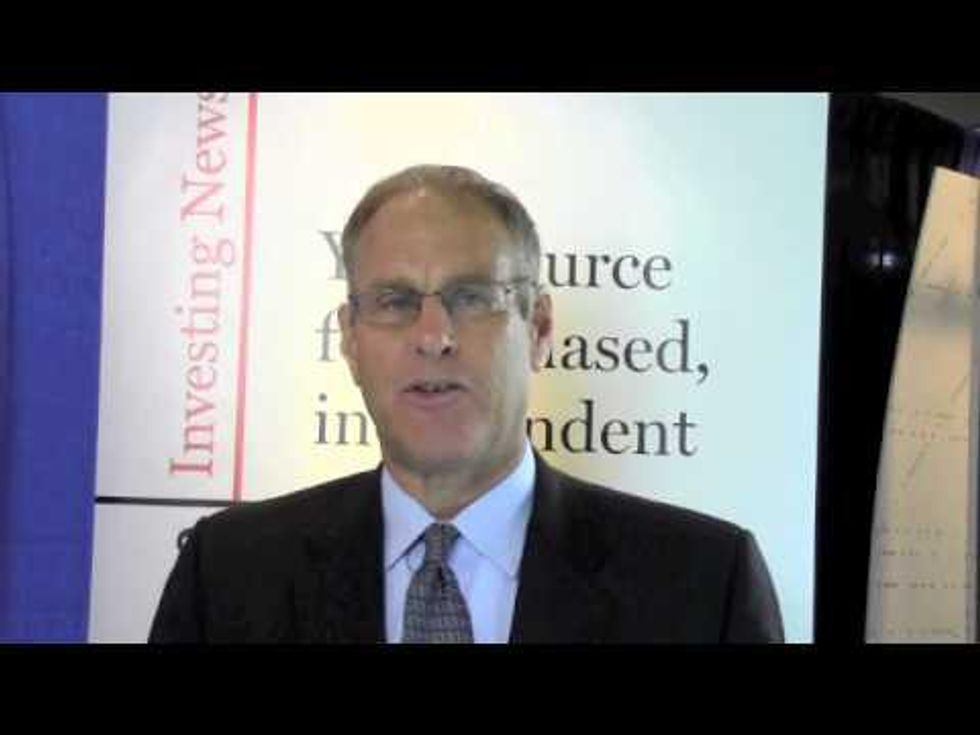 In a video interview with the Investing News Network’s senior editor, Andrew Topf, Rick Rule, chairman of Sprott US Holdings, shares his insights on gold prices and why he likes developmental gold juniors for the first time in 20 years.

Andrew Topf, the Investing News Network’s senior editor, had the opportunity to chat with Rick Rule, chairman of Sprott US Holdings, at the 2013 Vancouver Resource Investment Conference.

In the interview below, Rick shares his insights on gold prices and why he likes developmental gold juniors for the first time in 20 years. He also touches on investing in bear markets and what investors can expect from the global markets.

Andrew Topf: Good afternoon. I’m Andrew Topf for the Investing News Network, and I’m here with Rick Rule. Rick’s a frequent commentator on resource investing and is chairman of Sprott US Holdings. Rick, welcome to the show.

Rick Rule: Thanks Andrew, pleased to be here.

AT: Well, I’m sure you’ve been following, as we have, the fiscal situation in the United States. Should investors be bracing themselves for what happens when politicians start to practice brinkmanship over raising the US debt ceiling?

RR: I don’t think so. I think it’s inevitable that it’s going to happen. I suspect that the markets will react to the idiocy in Congress. I’m not sure why they do because I count on idiocy from Congress. What bothers me isn’t so much the debt ceiling, it’s the debt. People seem to focus on things that might, as an example, impact their quarterly bonus. People need to be concerned about the future of the country. Be concerned? Yes. About the debt ceiling? No.

AT: How about Europe? The European Central Bank recently signaled that the financial markets are in better shape. Do you see more calm in that part of the world than turmoil? What do you think is going to happen in Europe?

RR: In the near term I do see more. The difficulty on both sides of the Atlantic is that the government has looked to the solvency issue, and they substituted liquidity for solvency. They’re solving a problem in a way that doesn’t solve the problem. It prolongs the problem. Do I see things being calmer in the near term? Yes, calmer on the way to a much less pleasant future.

AT: If you look at the run up to the fiscal cliff, the gold price really failed to take off despite all the uncertainty. What’s it going to take for a gold price rally in the near term, do you think?

RR: I’m afraid, and I mean this honestly, I’m afraid that a gold price rise is inevitable. Gold is turmoil insurance. Trying to solve solvency problems with liquidity guarantees a worse solvency issue. When will the gold price go up? I don’t know. The existing currencies run on confidence, and the root word of confidence is “con.” The con is strong because we don’t want to consider the alternatives. So while a gold rise from my point of view is inevitable, I’m not sure it’s imminent.

AT: Just looking at the year in mining, the juniors had a truly awful year. I’m sure you’ll agree. The market’s extremely risk averse. What do you say to prospective junior mining investors? Has the bottom been reached, or do these stocks have further to fall?

RR: I don’t think the bottom has been reached, but I think this is the time to begin spending money if you’re willing to do the homework. Remember that if you merged every junior mining company in the world into one company, Junior Explore Company, that company would lose $2 billion a year. The sector as a whole is a disaster. What makes the sector work is the top 10 percent of the companies in the sector. If you’re not doing the work to segregate the wheat from the chaff, get out of the sector. If you’re willing to do the work, this is as good as it gets. People want to be in the sector at 2010 at a market top, and they don’t want to be in the sector three years later with the prices 70 percent off. It’s as though somebody walked down the street and ignored every store that had a for sale sign and went into the one store that said, “Full price. No discounts ever.” It’s silly.

AT: You’ve said that now is the time to buy, being a bear market.

RR: Absolutely. The idea is buy low and sell high. When can you buy low? In a bear market. When do you sell high? In a bull market. What are we in? A bear market. Should you be buying or selling? Buying, obviously.

Andrew: You’re a fan of the prospect generator model. You’ve given a recent presentation on it, which is very interesting. For those of us who don’t know, can you explain how it works and why you favor it.

RR: I favor it because it’s worked for me for 30 years. It works because it recognizes exploration for what it is: a high-tech, high-IQ research and development business. These are not asset-intensive businesses. What they are is intellectual capital businesses. Preserving your interest in a property where you have a one in 2,000 chance of success and sacrificing through dilution your interest in the knowledge base in the company is stupid. Using your company’s knowledge base to secure third-party funding for exploration risk gives you the highest probability of success in exploration. Most speculators fail because in high-risk, high-reward businesses they’re reward chasers. If you manage your risk, the reward will take care of itself. In prospect generation, you sell the risk while keeping part of the reward for yourself. It’s all about probabilities and it’s all about managing risk. That’s the whole business.

AT: How does an investor go about identifying a prospect generator versus some of the other companies?

RR: You have to do some work, but what you look for are companies that do a lot of joint ventures, companies that, rather than funding their own exploration, rely on other juniors or major mining companies to do their prospect generation. If the investor has a good broker — good brokers are rare — those brokers should be able to furnish investors with a list of prospect generators. If their broker can’t do that, I might suggest they switch brokers.

AT: You gave a couple examples in your talk. Would you be able to share one example that did well for you in terms of prospect generation?

RR: Oh, sure. I think a classic example probably recently was ATAC. It’s a company that we started financing seven or eight years ago at $0.10 a share, then $0.25 a share. Pre-eminent prospect generators in the Yukon. They went six or seven years without a discovery, and then it went from $0.10 cents to $7 on discovery. They never would have existed that long had they been exploring in a high-expense area like the Yukon without using other people’s money.

Another classic example some years ago, one that’s well known to many of your viewers, would be Arequipa. 36 projects they drilled with other people’s money. The 37th was Pierina. Thirty cents to $30 in 19 months.

AT: That’s quite a return. From an investor point of view, what are your thoughts on royalty or streaming companies, like Silver Wheaton (TSX:SLW,NYSE:SLW) or Franco-Nevada (TSX:FNV,NYSE:FNV)? As you know, these companies have done better than regular juniors this year.

RR: The model is wonderful. The royalties, the streaming agreements and the streaming companies themselves are expensive. I continue to believe that they’ll outperform the market, and I continue to own them, although I do believe that they’re selling for more than they’re worth. With regards to my own personal portfolio, I set trailing stops under them. The nice thing about these businesses is they generate truly free cash, and they don’t expose you, first of all, to recurring capital commitments, because they don’t have to spend the money, and also to operational risk, because in addition to having the streaming interest or the royalty, they’re often secured creditors as well. It’s a superior model, but it’s a model that you try and buy aggressively in psychotic market breaks.

AT: You’ve said that in resource investing you’re either a contrarian or you become a victim. Is there a sector right now that you see as being more contrarian than others?

RR: Uranium is deeply out of favor. I like the uranium sector. I like the platinum and palladium sector in terms of the metal, but not the stocks. I like the natural gas sector. I think it’s going to take two or three years for investors to make money, but I think they’re going to make a lot of money if they choose well.

I like, for the first time in 20 years, the developmental gold juniors. The last time that the developmental stage, the high-quality gold juniors with good grades and good capital efficiencies, the last time they were this cheap was 1992. It’s very, very, very rare in one’s career that one can buy high-quality developmental gold companies at fair prices. When I say they’re cheap, they’re not actually cheap. They’re reasonably priced. This is the third time in my 40-year career that they’ve been reasonably priced.

AT: It’s been a pleasure speaking with you today, Rick. I’ve been Andrew Topf for the Investing News Network. Thanks for joining me.