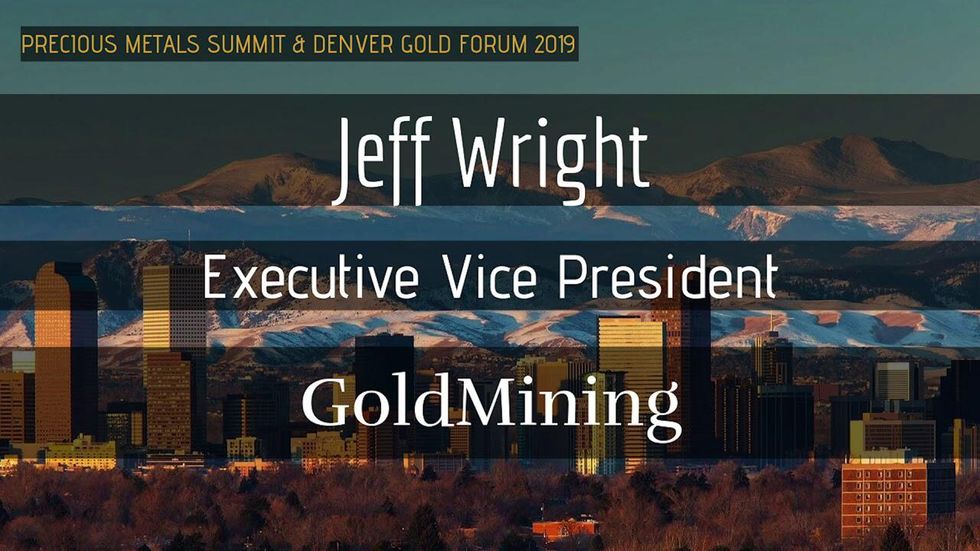 Jeff Wright of GoldMining says while his company is cautiously optimistic about gold, it won’t make any major price-based moves yet.

Gold has made a sizeable move in 2019, and many market participants are now asking whether the yellow metal will be able to maintain its increase — or go further.

Speaking at the Precious Metals Summit in Beaver Creek, Colorado, Jeff Wright, executive vice president of GoldMining (TSX:GOLD,OTCQX:GLDLF), said that his company is feeling positive about the yellow metal’s prospects, but does not plan to make any operational changes just yet.

“People and executives are cautiously optimistic. But at the same time they’re also cognizant that we’re not quite sure what gold will do in 2020,” he said.

“The gold price is right now (at about) US$1,500 (per ounce). My personal view is it’s going to move towards US$1,600 with further monetary easing by the Federal Reserve as well as the European Central Bank. But we’re not counting on that,” Wright continued at the sidelines of the show.

He explained that the reason for this caution is that it’s not the first time the gold price has been knocked down after going on a good run.

“We’ve seen this phenomenon happen a couple of times over the last five years, where you believe gold is moving back towards historic levels only to be squashed. So we’re being very cautious and prudent with our own balance sheet, not making any unnecessary moves right now.”

For Wright, the key factors to watch to determine if gold’s move is sustainable include interest rates and the value of the US dollar versus other currencies. Central bank gold buying is also a good indicator.

As mentioned, GoldMining’s plan is business as usual, at least for now. The company has multiple projects on the go around the world, with a total resource base of about 23 million ounces of gold.

According to Wright, GoldMining’s current focus is on its later-stage projects, including its Yellowknife project in Canada’s Northwest Territories and its Brazil-based Sao Jorge project. Heading into next year, the company will look at adding more land claims to Yellowknife and at permitting at Sao Jorge.

It will also potentially undertake a drill program at its La Mina project in Colombia.

Listen to the interview above for more from Wright on GoldMining’s future plans. Our full playlist for the Precious Metals Summit can be found on YouTube.