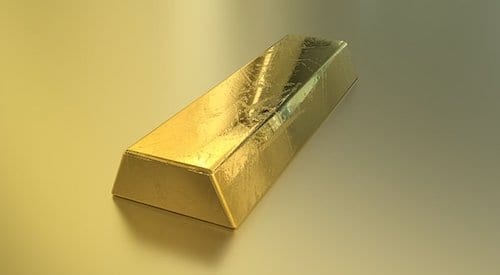 After sliding to a 19-month low when the US dollar rose on the back of Turkey’s currency crisis, the price of gold steadied thanks to the announcement that the US and China plan to discuss trade issues this month.

The gold price steadied on Thursday (August 16) after the US dollar slipped following an announcement that the US and China plan to discuss trade issues at some point this month.

Earlier in the session, the yellow metal hit its lowest level in over 19 months when the greenback ticked up thanks to concerns surrounding a potential Turkey crisis and China’s economic health.

“For a significant gold recovery we need to see the dollar lose some of the strength that has built up. The risk to emerging market growth from currency pressures is not going away immediately,” said Ole Hansen, head of commodity strategy at Saxo Bank in Copenhagen.

The United States and China plan to meet this month to discuss the ongoing trade tensions, which has created some positivity around the change of progress in resolving the trade conflict that have shaken up the financial and commodity markets in recent weeks.

The current political and economic landscape has sent investors running towards the “safety” of US Treasuries and the US currency, which in-turn makes the dollar-denominated gold more expensive for holders of other currencies, potentially subduing demand.

Despite the new hope surrounding a talk between the two countries, Hanson believes that the sentiment is still negative.

“I’m viewing the news of the talks as arresting the slide, not reversing it. The talks are low level, we are not out of the woods yet, sentiment is still bearish,” he states.

Since mid-February the US dollar has been on a steady increase, gaining about 8 percent and keeping the yellow metal down.

Higher interest rates also make the cost of holding gold more expensive, and between the hikes during the first part of this year and the ones expected to come in the second part of 2018 and next year, investors have been given yet another reason to back away from the precious metal.

Despite the consistent declines, the current currency crisis in Turkey has gold soaring within the country.

With all of the dramatic swings that have been happening with the lira, traders in Turkey are enthusiastically scooping up gold.

In fact, gold futures volumes have surged on the Borsa Istanbul and the 90-day average daily volume more than doubled from about 17,000 contracts in March to the current 40,000 contract. During the same time, the value of an ounce of gold in lira rocketed more than 30 percent.

“It definitely would make sense to own gold now in Turkey given the depreciation of the lira,” said Jonathan Butler, precious metals strategist at Mitsubishi Corp UK.

“This is consistent with gold’s status as a safe haven and will likely be mirrored on the physical market with demand increasing for jewelry and gold bars,” he added.

While it lags behind the world’s two largest buyers of the metal, China and India, Turkey remains a significant source of global demand for gold.