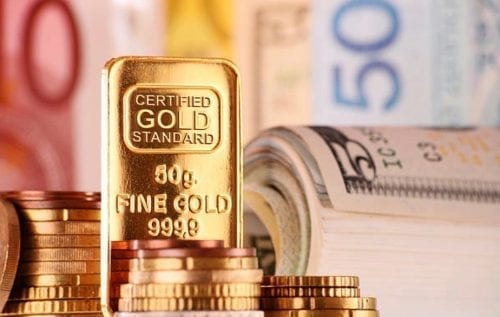 Gold found its footing in the market when the US dollar lost some of its steam after reaching a three-month peak on the back of rallying US yields.

The gold price steadied on Tuesday (April 24) as the US dollar retreated from its earlier three-month peak. Gold traded up, climbing 0.51 percent after the greenback slowed.

The dollar previously climbed in response to US yields rallying, pushing prices to their highest since mid-January. Tuesday saw US yields hitting the all-important 3-percent mark.

“Yesterday was a big day in terms of treasury yields impacting currencies. Today, the 10-year did claw its way up to 3 percent to no big effect as far as currencies are concerned,” said Alan Ruskin, global head of currency strategy at Deutsche Bank (NYSE:DB) in New York.

While prices have cooled, the greenback remains in a positive position as higher yields tend to make a country’s currency more attractive.

“We think that the dollar may have made a bullish breakthrough in recent days and thus expect it to resume its short-term uptrend soon. The rising bond yields in the US should keep the dollar supported as the market looks forward to two or three more rate increases from the Federal Reserve this year,” said Fawad Razaqzada, market analyst at Forex.com.

Gold responded more favorably on Tuesday due to the fact that lower prices are tempting investors back into the market. The dollar’s state has made the precious metal more attractive to price-sensitive buyers.

With ongoing risks that could shake up the market at any moment, gold has been able to maintain some of its appeal due to its safe-haven nature.

“There are still a lot of risks out there that could flare up at any time,” said Capital Economics analyst Simona Gambarini. “There might be some investors who hadn’t bought insurance before who think now is a good time to get in,” she added.