Fremont Gold (TSXV:FRE)(“Fremont” or the “Company”) is pleased to announce that it has received the complete drill results for the previously announced drill program at the Gold Canyon Project in northern Nevada (see Fremont news releases dated May 9 and June 1, 2018).

Fremont Gold (TSXV:FRE)(“Fremont” or the “Company”) is pleased to announce that it has received the complete drill results for the previously announced drill program at the Gold Canyon Project in northern Nevada (see Fremont news releases dated May 9 and June 1, 2018). Five RC drill holes were completed at Gold Canyon in late May totalling 1,067 meters, out of a total drill program of 1,559m which included the nearby Gold Bar project. Highlights include:

Clay Newton, Vice President Exploration, states, “We are very encouraged by the recent drill results which revealed three oxide gold zones within the vicinity of the historical Gold Canyon pit. Drilling at Gold Canyon confirmed gold mineralization both northeast and west of the existing pit.  Gold is hosted within two Denay Limestone units and is structurally controlled by two faults; a NE-SW normal fault and a west dipping thrust fault. The best mineralization occurs where the two stratigraphic horizons are intersected by these fault structures, which act as feeders for mineralizing fluids.

On the east side of the pit, holes GCR-1, 2 and 5 targeted the NE striking fault zone observed in the northern wall of the Gold Canyon pit. Hole GCR-2 hit the zone, returning a nice 18m intercept. Hole 1 was vertical and clipped the northern edge of the mineralization, while Hole GCR-5 returned anomalous but uneconomic gold values. However, we now have a good handle on the geometry and strike of this important northeast-trending structure and plan to follow-up with drill holes along strike to the northeast.

On the west side of the Gold Canyon pit, Hole GCR-3 intersected 18m @ 1.9 g/t Au from surface, just beyond the current pit boundaries. This is at-surface oxide mineralization that was not exploited by the former operators. In addition, the same hole intersected a deeper zone that returned 6.1m @ 1.8g/t Au at about 2300m elevation. The same 2300m horizon was intersected in hole GCR-4 and while the tenor was less, it does indicate continuity of mineralization and demonstrates the potential for a new mineralized body at relatively shallow depth near the historical pit. This mineralization appears to be controlled by a west-dipping thrust fault creating ample opportunity to discover additional gold mineralization along strike and down dip on this structure — as well as down plunge along structural intersections. Future holes will be drilled from further west and angled towards the east, in order to intersect this thrust fault at the best angle”. 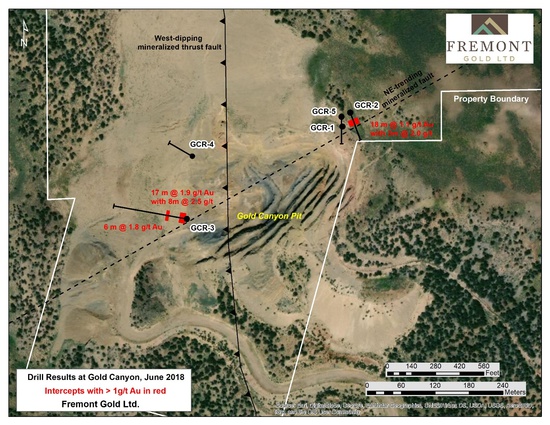 Dennis Moore, President and CEO of Fremont Gold, added, “I am very pleased with our maiden drill program. The Fremont team has demonstrated the existence of several mineralized zones at both Gold Canyon and Gold Bar, including one that was previously overlooked just west of the Gold Canyon Pit. Additionally, geochemically anomalous zones identified by the previous operators at Gold Canyon, called the French Trail and Northwest Gold Ridge, remain untested but will be drilled in the near future (see Figure 2 below). As we are discovering, the Gold Bar district is an under-explored, target-rich neighborhood. We are optimistic that we will find a lot more gold mineralization in future drill programs.” 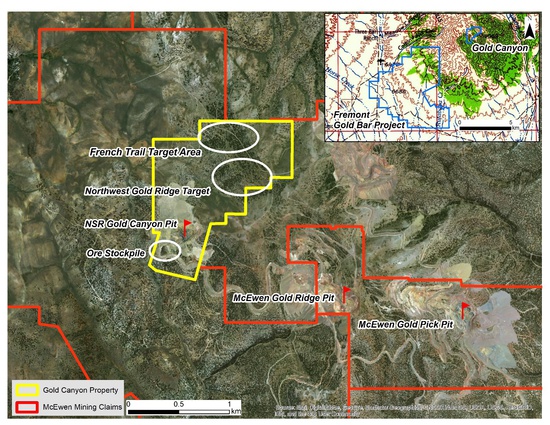 The Gold Bar and Gold Canyon properties are both former mines in the Gold Bar District in Eureka County, Nevada, an active mining area in the Roberts Mountains within the Battle Mountain-Eureka Trend. The district contains several Carlin-style sediment-hosted gold deposits including McEwen Mining Inc.’s (“McEwen”) Gold Bar project, which is scheduled to produce 62,800 oz Au/annum at $770/oz starting in early 20191.

Fremont’s Gold Bar and Gold Canyon projects are adjacent (west) and immediately north of McEwen’s Gold Bar mine development project, which is currently under construction and expected to be completed by early 2019. While McEwen’s development project and Fremont’s property share the same name, the historic Gold Bar mine is held by Fremont and produced 286,354 ounces of gold from 1986 to 1994. McEwen’s property comprises the former satellite pits to the original Gold Bar mine and they adopted the historical mine name. However, the original Gold Bar pit occurs in the south-central portion of Fremont’s 10,096-acre (4,086 ha) land package, five kms southwest of McEwen’s project. Fremont’s property hosts an historical resource of 147,000 ounces @ 2.57 g/t Au, called the Millsite deposit2 (see Fremont press release dated September 12, 2017) thought to be a faulted off-set of the former Gold Bar ore body located on the northwest side of the old pit.

The Millsite deposit resources are historic resources estimated for the Atlas/Granges Exploration Ltd., joint venture. The resources are described in a 1996 company report titled “Atlas-Granges Joint Venture, 1996, Year End Report” and mentioned in a 1997 Atlas company report “Gold Bar Review.” These historic results executed by a formerly producing American mining company are viewed as reasonably reliable and relevant in terms of guiding future exploration. However, additional exploration work, including confirmation drilling is required to verify the historical estimate. A qualified person has not done sufficient work to classify the historical estimate as current mineral resources or mineral reserves and Fremont is not treating the resource as current mineral resources or mineral reserves.

Drilling was conducted by reverse circulation methods by George DeLong Construction and Drilling of Winnemucca, Nevada. Sample intervals were every 1.52 meters (five feet). Care was taken to flush the bottom of the hole thoroughly with water after each sample run. Field duplicates were taken at the rotary splitter about every 30th sample. Samples were assigned a number and no interval numbers were placed on the bags. Sample numbers were completely randomized before submittal to the lab and the samples were laid out and analyzed by the lab as per the randomized list. Gold standards and blanks were inserted by Fremont into the randomized sample stream around every 30th sample. The lab also frequently inserted its own internal standards and blanks. All standards, blanks and duplicates were checked by the QP and found to be consistent. Examination of the analytical returns in the randomized order indicated no carry-over contamination between samples by the lab. Samples were analyzed by 30g fire assay/ICP finish by American Assay Laboratories of Sparks, Nevada. The program was managed and supervised by Dr. Clay Newton, a qualified person as defined by National Instrument 43-101.

Fremont holds exclusive rights to the Gold Bar-Gold Canyon and Hurricane Projects, located respectively in Eureka County and Lander County, Nevada. Fremont also holds rights to the North Carlin Project in Elko County and the Goldrun Project in the Adelaide mining district, Humboldt County, Nevada. The Company’s strategy is to conduct exploration on its existing projects using the collective exploration expertise of the management team. Further information regarding the Gold Bar, Gold Canyon, Hurricane, Goldrun and North Carlin Projects are available at www.sedar.com.

Click here to connect with Fremont Gold (TSXV:FRE) for an Investor Presentation.