Exploration at the Manitou property began in the early 1900’s with trenching, and minor gold production. Modern exploration began in 1965 and continued through 2015 with several companies and small-scale vendors conducting a variety of exploration programs. Reviewing timelines of the limited historical work suggests periods of lower gold prices interrupted steady exploration on the property. The technical team’s review of work at Manitou shows the potential for shear-zone hosted gold.

The Manitou gold property is located within the eastern margin of the Archean Eagle-Wabigoon-Manitou lakes Greenstone belt approximately 40km south of the community of Dryden. This area has undergone extensive exploration from 1950’s to present day, and the property itself has seen several drill campaigns and sampling programs. Ongoing activity in this belt by others has uncovered several north-northeast structural zones that rank high for gold potential and the property is situated along the possible extension of these gold-bearing shear zones.

The Manitou Property is underlain by mafic to felsic metavolcanic rocks locally intruded by granodiorite porphyries which are intensely altered and contain significant sulfide mineralization. Deformation and alteration are extensive on the property, with regional scale faults cutting northeast, and shear zones trending north-northeast. Numerous developed prospects with historic production are situated along the same northeast trending fault zone in close proximity to the property, including the Elora Mine located 500m to the northeast of the property (drill intercepts noted up to 216.85 g/t Au over 0.3m, and 15.5 g/t Au over 6.9m; MDI 52F07NE 00015).

The Ontario Mineral Database records 16 gold occurrences within the land position, most of which contain shear-hosted gold and sulfide mineralization. Several of the occurrences were mined and variable amounts of ore was historically extracted from small-scale workings. Numerous high-grade gold samples have been collected (e.g., 78.1 g/t Au grab sample from the Bird Island occurrence: MDI 152F07NW00008). 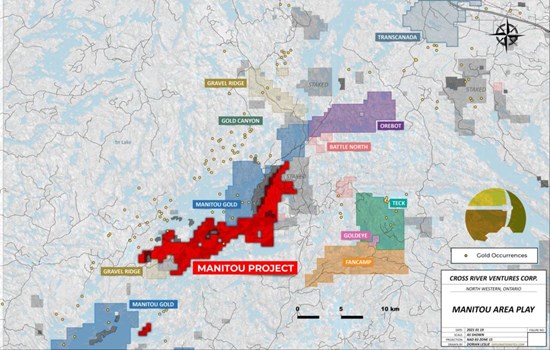 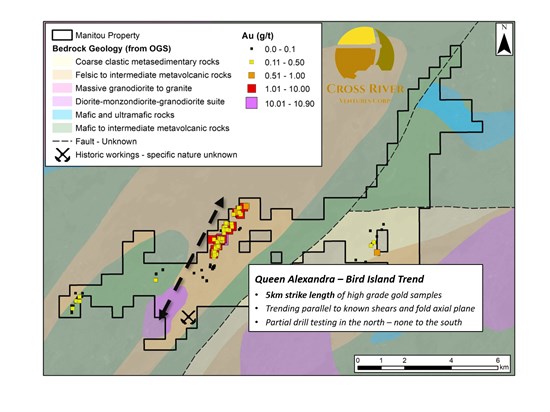 The Company is continuing data compilation, review, and analysis on all of its NW Ontario projects. A series of airborne geophysical surveys are planned for Q2 to further delineate priority target areas before groundwork is set to begin late spring and into the summer months. Once targeting is complete the Company plans to drill test the highest priority areas.

The technical content disclosed in this press release was reviewed and approved by Dr. Rob Carpenter, P.Geo., Ph.D., a Qualified Person as defined under National Instrument 43-101. Historical assay results contained in this press release were not verified by the Company, however, the historical reports referenced were authored by experienced geoscientists and copies of laboratory assay sheets were commonly inserted in the reports.

Cross River is a gold exploration company that is focused on the development of top tier exploration properties in premier mining districts. The Company controls a multiple project portfolio in NW Ontario, Canada, with highly prospective ground in and among prolific, gold bearing greenstone belts. The Company also owns an option to acquire a 100% undivided interest in the Tahsis Property, an early-stage gold exploration property located on Vancouver Island, in the Nanaimo Mining Division, British Columbia. Cross River’s common shares trade under the symbol “CRVC” on the CSE.

This news release may contain forward-looking statements. These statements are based on current expectations and assumptions that are subject to risks and uncertainties. Actual results could differ materially because of factors discussed in the management discussion and analysis section of our interim and most recent annual financial statement or other reports and filings with the Canadian Securities Exchange and applicable Canadian securities regulations. We do not assume any obligation to update any forward-looking statements, except as required by applicable laws.