ATAC Resources is pleased to announce the commencement of an updated resource and preliminary economic assessment for its high-grade Tiger Gold Deposit.

ATAC Resources Ltd. (TSXV:ATC) (“ATAC”) is pleased to announce the commencement of an updated resource and preliminary economic assessment (“PEA”) for its high-grade Tiger Gold Deposit and provide an exploration update for its 660-sq.km Rau Project.

ATAC believes the carbonate replacement Tiger Gold Deposit offers substantial value via strategic opportunities for near-term development and cash flow at the Rau Project. Work undertaken on the deposit since the previous PEA (announced May 21, 2016), indicates significant upside potential from a new economic study. Mineralization remains open to extension at depth, down dip and along strike.

“We believe drilling and metallurgical testing completed after the 2016 PEA provides numerous  opportunities to extend the mine life of the proposed operation,” commented president and CEO Graham Downs. “In addition to the potential for expanded production, the updated study is anticipated to improve project economics and daylight value for our shareholders. The Tiger deposit is a rare asset given its high oxide gold grades, simple metallurgy, proximity to surface, and limited development footprint. The updated PEA coincides with a rising gold price environment and industry interest in high-margin development assets in low-risk jurisdictions. The Tiger deposit remains open in multiple directions and can act as a cornerstone asset within an emerging polymetallic district.”

The updated resource and PEA will incorporate a number of key improvements to the deposit, including:

Highlights from Tiger diamond drilling completed subsequent to the 2016 PEA are listed below: 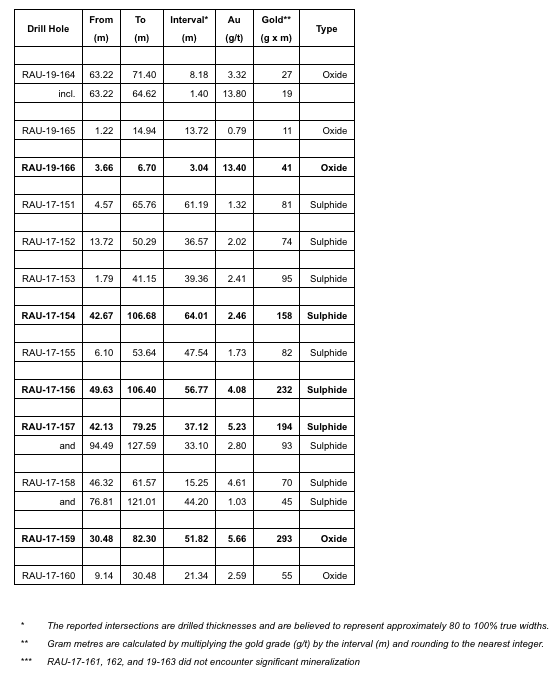 This drilling encountered oxidized breccia zones above the main stratabound manto horizon. The drill program successfully identified oxide mineralization within areas of the 2016 PEA pit that were classified as waste. It also provides compelling evidence for zones of structurally-controlled breccias and chimneys outside the primary oxide horizon. The manto horizon remains open in multiple directions and at depth, while surface sampling reveals oxide breccia zones extend significantly to the south and south-east, outside the existing resource and pit shell.

ATAC completed eight reconnaissance diamond drill holes targeting geophysical anomalies and prospecting discoveries for intrusive-related precious and base metal potential. The 1 km2 target area is located at the east end of the Rackla Pluton, approximately 4 km east of the Tiger deposit, in a region with relatively low relief and nearly complete overburden cover.

Results from holes RPP-19-001 to -003 from the Bobcat area (link to map) were released on September 9, 2019. High-grade prospecting grab samples from the area include 41.90 g/t gold with 10.55% copper, and 24.70 g/t gold with 2.05% copper. Drilling intersected narrow high-grade, gold-copper distal skarn vein mineralization. The surface samples and drill results are clustered along the eastern margin of a reverse magnetic high feature that may represent an area of more intense hydrothermal alteration at depth.

Holes RPP-19-004, -005 and -007 were drilled to test strong conductivity anomalies adjacent to a pronounced reverse magnetic high. Tremolite veins encountered within the Kathy Fault in RPP-19-007 returned 9.40 m of 0.23 g/t Au from 54.00 m. Deeper in the hole, pyrrhotite and pyrite replacement of a conglomerate in the immediate footwall of the Kathy Fault returned 6.10 m of 0.34 g/t Au from 99.97 m. The intensity of the magnetic anomaly is not explained by drill data and may relate to more highly-altered mineralization at depth. RPP-19-004 and -005 intersected numerous thin tremolite-sphalerite-galena veins in intensely marbleized rocks that are indicative of a relatively distal skarn environment.

Holes RPP-19-006 and -008 were designed to evaluate two areas of anomalously high magnetic response. RPP-19-006 drilled through several pegmatite dykes up to 30 m wide, but did not encounter the main mass of the Rackla Pluton. RPP-19-008 targeted a much stronger magnetic high and encountered altered granodiorite and several pegmatite dykes, possibly indicative of a multiphase intrusive system. The granodiorite has a late-stage chlorite overprint and trace quantities of quartz-pyrrhotite-chalcopyrite-molybdenite veining.

Previous soil sampling in the Rackla Pluton target area between 2010 and 2011 was substantially hindered by frozen ground and organic cover. As such, no significant anomalies where returned from that work. Resampling of selected areas in August and September 2019 recovered soil samples from depths between 70 and 100 cm, which contained moderately to highly anomalous values of copper, bismuth, arsenic and gold within basal glacial till.  The broad zones of alteration and anomalous soil samples collected from areas around the Rackla Pluton are encouraging signs for early-stage greenfield exploration targets. Additional analysis of the geophysical and geochemical data remains a high priority to direct future exploration in the district.

Mr. Matthew Keevil, Vice President Corporate Affairs, has tendered his letter of resignation from ATAC effective November 22, 2019, to pursue a new opportunity. The Board of Directors and management would like to thank Mr. Keevil for his contributions to ATAC, and wish him the best in his future endeavours.

All prospecting grab samples reported in this release represent significant results only. Low or below detection values for gold and copper were encountered in unreported outcrop and grab samples. The reported intersections are drilled thicknesses and true widths are unknown.

Rigorous procedures are in place regarding sample collection, chain of custody and data entry. Certified assay standards, duplicate samples and blanks are routinely inserted into the sample stream to ensure integrity of the assay process.

The technical information in this news release has been approved by Adam Coulter, M.Sc., P.Geo., Project Geologist for ATAC and a qualified person for the purposes of National Instrument 43-101.

ATAC is a Yukon-based exploration company focused on developing Canada’s only Carlin-type gold district and intrusion-related polymetallic targets at the Rackla Gold Property. Work on the ~1,700 km2 property has resulted in the Osiris Project Inferred Mineral Resource of 1,685,000 oz of gold at an average grade of 4.23 g/t (in 12.4 Mt), a positive Preliminary Economic Assessment for the Tiger Gold Deposit, and numerous early-stage gold and base metal discoveries. ATAC is well-financed with approximately $10 million in working capital.

On behalf of Management and the Board of Directors of ATAC Resources Ltd.