Algold Resources Ltd. (TSXV:ALG) (“Algold” or the “Corporation”) today announced a new series of assay results from drilling carried out in July and August 2018 on the priority targets of Salma Vein System (“SVS”), Eleonore and Sophie located within the Corporation’s Tijirit Project in Mauritania.

Algold Resources Ltd. (TSXV:ALG) (“Algold” or the “Corporation”) today announced a new series of assay results from drilling carried out in July and August 2018 on the priority targets of Salma Vein System (“SVS”), Eleonore and Sophie located within the Corporation’s Tijirit Project in Mauritania.

The latest drill results from both reverse circulation (“RC”) and diamond core drilling further substantiate Algold’s confidence in the Tijirit Project, with data and results that continue to confirm the high-grade nature of the shear-hosted mineralization.

Assay result highlights from the drilling over new targets at Eleonore East, Salma and Sophie II, as well as results from the infill drilling at Eleonore North, Central and South are presented in Table 1.

Results are pending for approximately 2,060 samples from work carried out as part of the 25,000-meter Phase IV drilling program. The Corporation expects to receive the remaining analysis by the end of November 2018. 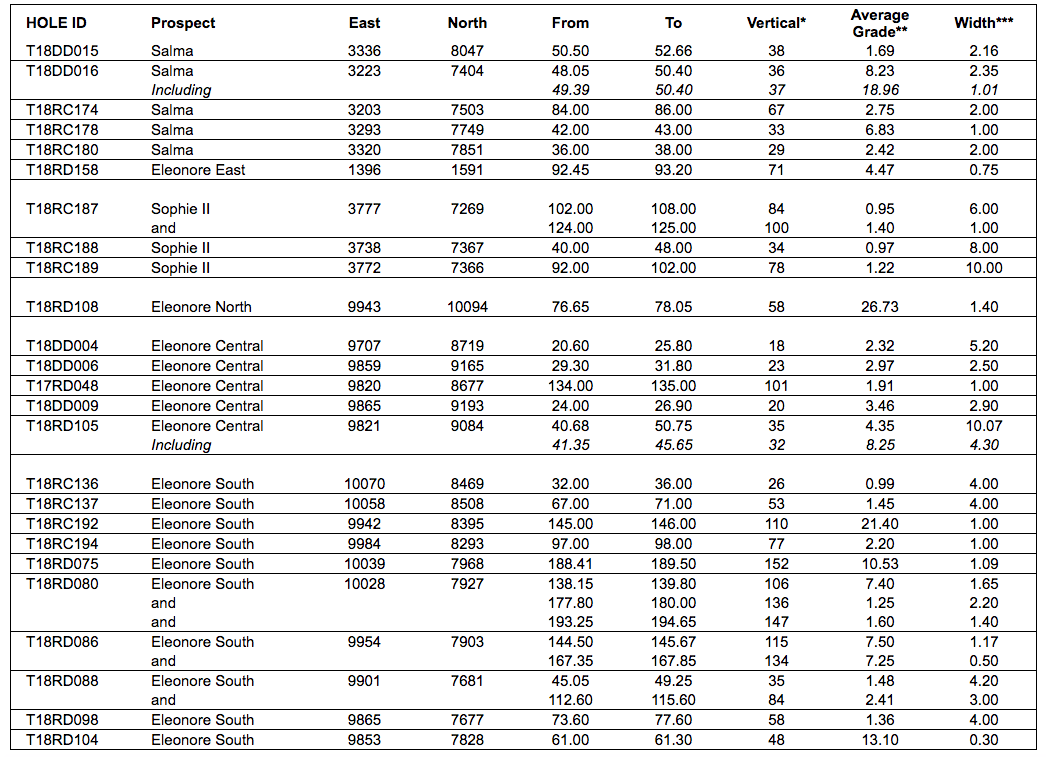 Eleonore*Vertical depth of intersection below RL collar.
**Weighted average grade, composite based on a minimum grade of 0.3 g/t Au with an internal dilution of 0.005 g/t Au over 2 meters and an edge grade of 0.25 g/t Au permitted.
***Width believed to be close to true width.
No capping of higher values has been applied.

Drilling continues to confirm the spatial continuity within the three zones tested (North, Central and South). Generally, drill spacing was at less than 40-meter centers, to allow conversion of current inferred resources to indicated.

Figure 2 below illustrates the mineralized intersection for hole T18RD105. The highest grades are associated with quartz veining within the biotite and pyrite-rich shear zone, where visible gold is often observed. Shear veins have been recorded dipping sub-vertically and moderately to the southeast. Observations from drill core suggest a south-east block up component, which resulted in mineralization being best developed in shallower east-dipping segments where dilation is widest.

Results from Salma confirm the presence of a narrow, but high-grade, quartz vein hosted within a locally sheared granitoid and dipping shallowly to the west. Gold is visible in the core and variable results associated with the 50-gram fire assay analysis suggest that the gold distribution is highly erratic and nuggety.

Drilling confirms that 1,250 meters of the northerly portion of the Salma is consistently mineralized and remains open in all directions.

At Eleonore East, mineralization is also associated with shearing in both the granitoids as well as the volcano-sedimentary rock package. Mineralogy is similar to Eleonore, but with the addition of arsenopyrite in the mineralized system.

A new zone, identified by trenching in 2017, is located 900 meters south of currently the defined Sophie II mineralization, where results include 1.43 g/t Au over 26 meters, and 800 meters from the Sophie III mineralization, where results include 1.3 g/t Au over 10 meters. Mineralization is associated with a sub-vertically dipping banded iron formation (“BIF”). In trenching, the exposed BIF unit was mapped between six to 12 meters true width, with individual grades of up to 2.2 g/t Au. This compares well with the BIF intersected in drilling, where mineralization was intersected 90 meters down dip. Currently, the structure has been identified over 200 meters and remains open to the north and at depth.

The area remains highly prospective for the discovery of further gold mineralization with multiple soil anomalies and BIF units identified that have yet to be tested, both on this and parallel structures.

The Corporation is pleased to report the discovery of  new zone of outcropping high-grade gold mineralization approximately 4.5 kilometers south of Eleonore, along the same trend, where rock-chip sampling returned results up to 96.5 g/t Au.  Despite much of this area being masked by sand cover and with only preliminary exploration work completed thus far, we note resemblances to the Eleonore-type mineralization in the sheared host rocks and quartz veining.

Analytical work for drill core and chips, geochemical samples and rock chip samples is carried out at the independent SGS Laboratories Ltd. in Bamako, Mali. The 50-gram fire assay with ASS finish analytical services are accredited by SANAS and are carried out with a quality assurance protocol in line with ISO 17025:2005. Samples are stored at the Corporation’s field camps and put into sealed bags until delivered by a geologist on behalf of Algold to the laboratory in Bamako, Mali, where samples are prepared and analyzed. Until the end of 2016, samples were analyzed at ALS’s facility in Loughrea, Ireland. Beginning in 2017, samples are analyzed at SGS Laboratory, Bamako. Samples are logged in the tracking system, weighed, dried and finely crushed to better than 70%, passing a two-millimeter (Tyler 9 mesh, US Std. No.10) screen. A split of up to 1,000 grams is taken and pulverized to better than 85%, passing a 75-micron (Tyler 200 mesh) screen, and a 50-gram split is analyzed by fire assay with an AA finish.  Anomalous samples greater than 5 g/t Au are re-analyzed by 50-gram fire assay with gravimetric finish.  Selected samples may be re-analyzed using a one-kilogram cyanide leach (Bottle Roll) using “LeachWELL” or the one-kilogram screen fire assay method.  Blanks, duplicates and certified reference material (standards) are routinely inserted to monitor laboratory performance during the analysis. The independently inserted quality control samples have been reviewed on receipt of the assay results and fall within the acceptable limits as defined by Algold’s Standard Operating Procedure.

This press release has been reviewed for accuracy and compliance under National Instrument 43-101 by André Ciesielski, DSc., Geo., Algold Resources Ltd Lead Consulting Geologist and Qualified Person, and Alastair Gallaugher, C.Geo. (Chartered Geologist and Fellow of the Geological Society of London), BSc. Geology, Algold’s Exploration Manager in Mauritania, Qualified Persons as defined by NI 43−101 Standards of Disclosure for Mineral Projects. André Ciesielski has further approved the scientific and technical disclosure in the news release.

Algold is developing the Tijirit Gold Project, an area measuring more than 750 km2, which is comprised of the 306-km2 Tijirit Exploitation License and the 460-km2 Tijirit East Exploration License. The Tijirit Gold Project is situated approximately 25 kilometers southeast of the Tasiast gold mine. Exploration is being carried out on the Eleonore, Sophie I, Sophie II-III, Lily and SVS zones.

Click here to connect with Algold Resources Ltd. (TSXV:ALG) for an Investor Presentation.