Advance Gold is pleased to announce that its Tabasquena project in Zacatecas, Mexico, has increased the size of its continuous chargeability anomaly.

Advance Gold Corp. (TSXV:AAX) (“Advance Gold” or “the Company”) is pleased to announce that the recently completed second phase of 3D Induced Polarization (IP) geophysical survey on its Tabasquena project in Zacatecas, Mexico, has significantly increased the size of its continuous chargeability anomaly. This anomaly now has an east-west width of approximately 400 to 500 metres and an apparent strike length of over 1000 metres. The anomaly remains open to the north and to the south and at depth.

Images below are east-west cross sections representing key portions of the overall anomaly where upcoming drilling will test this continuous chargeability anomaly. 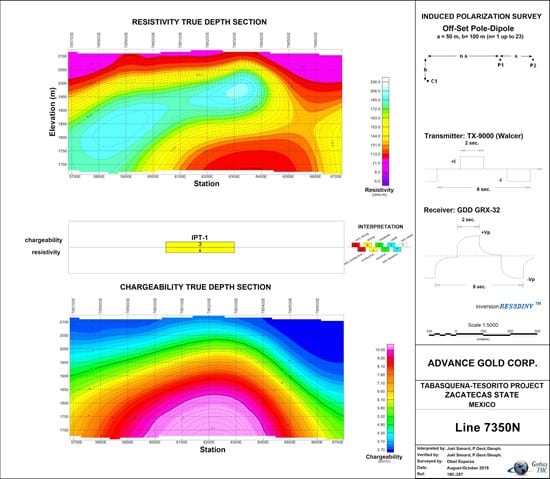 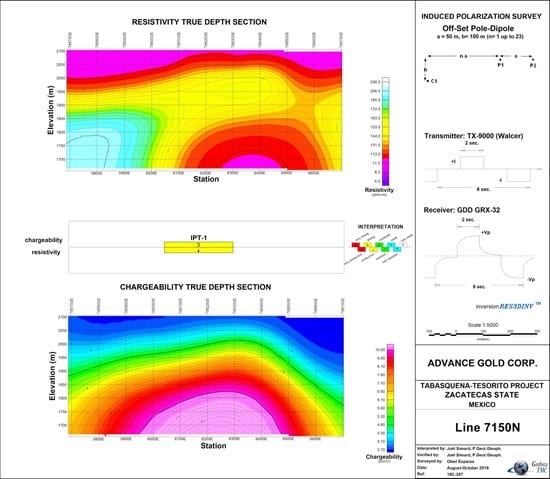 Allan Barry Laboucan, President and CEO of Advance Gold Corp. commented: “After our first phase of geophysics, we identified a large chargeability anomaly with the highest chargeability at the southern end of the grid and still wide open. In that southerly direction we have elevation relief and it was also where the anomaly appeared to be closest to surface. Prior to drilling this anomaly, we decided to carry out a second phase of geophysics to see if the anomaly continued to the south. The second phase of geophysics has revealed that the anomaly actually has a much longer strike length and appears to be somewhat wider. This chargeability anomaly is now at least 1000 metres from north to south and approximately 400 to 500 metres from east to west. It sits below a network of veins with widespread gold and silver mineralization that ranges from anomalous to high-grade gold. There are three shafts on the property that go down around 100 metres that were used in the historical mining of the oxide zone of the Tabasquena vein. The geophysical anomaly is primarily right below those shafts, starting at approximately 200 metres below the underground workings. It is fair to say that we have identified a major target. Our next step will be to drill this target, we expect to start this shortly and will put out a news release once it has started.”

Gennen McDowall, Geophysical Advisor to Advance Gold Corp. commented: “This southerly extension to the original IP grid has shown that the large chargeability anomaly first detected in August is actually much bigger than originally thought and appears to strike right across the claim group and shows little evidence of ending either to the north or to the south and its depth extent is as of yet unknown. The chargeability anomaly is visible on every east-west IP line. The observed near surface mineralisation may be an expression of a much larger mineralised body underlying the entire Tabasquena project.”

The first 3D Induced Polarization survey was carried out by GEOFISICA TMC SA de CV, between August 3rd and August 14th, 2019. Approximately 9.6 kms of IP data was collected over the central portion of the company’s claims. This was followed up by a second phase of geophysics consisting of 5 east-west lines. The southerly extent of the second survey reached just beyond the Tesorito shaft. An off-set pole dipole array was used.

Data processing and inversion of the data was carried out using RES3DINV software. The inversion model was extended to approximately 550 metres below surface. 3D Voxel images together with a series of depth slices were generated (all available on the company’s website).

The main purpose of the IP survey was to map, laterally and at depth the evolution of the known gold and silver veins and to identify any new mineralised structures. The survey was designed in such a way to allow approximately 500 to 550 metres of vertical depth investigation.

The IP survey area encompassed the historic and new shafts that are located to the east of the Tabasquena and Nina veins that define a mineralised system that outcrops at surface for 2.0 km. From past exploration work, the Tabasquena vein was recognized over approximately 70 m along strike near the shafts but only at shallow depth (< 100 m).

The fourteen (14) vertical sections that were extracted from the 3D IP inversion voxels suggest the presence of (4) four main stratigraphic horizons (lithological units) mainly characterized by their resistivity signatures.

The IP data also clearly shows that the large polarisable body/target is apparently quickly deepening northward and getting closer to surface southward. The IP anomaly starts at around 100 metres below the past drill hole intersections that contained widespread gold and silver mineralization in epithermal veins.

Chargeability and resistivity anomalies are indicated on the IP sections (see report on company’s website) and are graded as per their relative strength. Those chargeability anomalies that are deemed to be caused by the same anomalous target are grouped together in what is called a polarisable axis. Only one main axis was delineated following the review of the IP data, which was labelled IPT-1 (Map C351-3 & Figure 11, report on company website). This axis is a single large amplitude continuous chargeability anomaly running north-south, coincident with the two shafts at Tabasquena, the Tesorito shaft and the surface projection of the mineralised veins. This anomaly has been categorized as having a high chargeability and is conductive. The anomaly has an average depth of approximately 250 to 300 meters. It should also be mentioned that this anomaly is visible on every line, albeit less intense on the most northerly line, as the target is becoming deeper to the north.

This geophysical work has now identified a large consistent chargeability anomaly that can be seen on all lines, implying a strike extent of at least 1000 metres and an apparent width of 400 to 500 metres. This observed IP anomaly could define a much wider mineralised system at depth.

The main recommendation of the original geophysical report was that prior to drilling the anomaly the 3D IP survey should be extended to the southeast for at least 1 km in the direction of the Tesorito shaft. This has now been completed and this new work has established that the main anomaly does in fact continue past the Tesorito shaft and is somewhat wider. A number of boreholes are now planned to intersect this anomaly.

Julio Pinto Linares is a QP, Doctor in Geological Sciences with specialty in Economic Geology and Qualified Professional No. 01365 by MMSA., and QP for Advance Gold and is the qualified person as defined by National Instrument 43-101 and he has read and approved the accuracy of technical information contained in this news release.

Advance Gold is a TSX-V listed junior exploration company focused on acquiring and exploring mineral properties containing precious metals. The Company acquired a 100% interest in the Tabasquena Silver Mine in Zacatecas, Mexico in 2017, and the Venaditas project, also in Zacatecas state, in April, 2018.

Venaditas is well located adjacent to Teck’s San Nicolas mine, a VMS deposit, and it is approximately 11km to the east of the Tabasquena project, along a paved road.

In addition, Advance Gold holds a 13.23% interest on strategic claims in the Liranda Corridor in Kenya, East Africa. The remaining 86.77% of the Kakamega project is held by Barrick Gold Corporation.